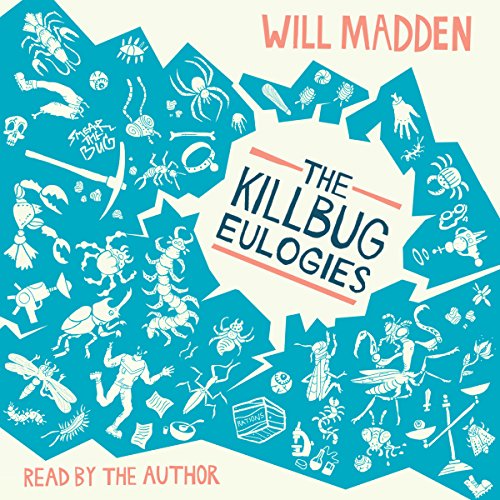 Disemboweled by the razor scythes of a six-foot mantis, lobotomized by hungry larvae, or roasted on an exoskeletal skewer: these are only a few of the disgusting ways to die in humanity's hopeless war against giant space insects. Deployed on a brutal bug planet without a chaplain, a depleted infantry unit has entrusted its eulogy duties to the soldier standing closest at time of death. Somehow this rotten privilege keeps falling to Pvt. Timothy Archon.

Archon's speeches explore the strange obsessions the men have developed since the war began - from archiving killbug death psalms to trying to seduce the enemy. Did these manias somehow redeem them, or only bring them quicker to their messy ends?

But more importantly: Why does Archon keep having such terrible luck?

Eulogies from a bug war

The book showed promise. I LOVE sci fi. I loved starship troopers. I've read a few other great bug based sci fi books. I was quite disappointed. Let me clarify why. The first few chapters were eulogies of sexually deviant troopers screwing bugs and were rather descriptive and sexually obsessed. Later chapters were good and the last two were exceptional. The narrator had a great range of very expressive voices for the various characters. If you can get through or fast forward past the first couple you will very much enjoy the later aspects of the story. I was voluntarily provided this free review copy audiobook by the author, narrator, or publisher.

A completely unique read/listen with a protagonist/orator on the edge of sanity, or over it!?! Soooo different than anything I've heard before, but it caught my complete attention and concentration, engrossed as I was in the eloquence and perversity of each eulogy, building the story to it twisty/twisted end...

Short stories about life and death of men in war

Earth has been destroyed by the killbugs, an alien race similar to insects but much larger and dangerous. Now stranded on a killbug planed, several man are participating in this war, and dying. Since their chaplain has also died, Timothy Archon will be in charge of the eulogies for his fallen friends.

This book is a satire about humanity and war. Madden uses a lot of black humor to illustrate the lives and deaths of nine men of Archon’s battalion. Some are hilarious and some just entertaining, but there is a dark and sad undertone that did not leave me indifferent.

Each chapter is a short story telling the life and death of one of these men. Most of deaths are quite absurd, as I guess happens in real life.

I have read rave reviews about this book, and I had great expectations. I found the idea quite original, but for some reason it was not my cup of tea. I think it is a book to be enjoyed in small doses, and not just in one sit.

The book is narrated by the author himself, and he did a wonderful job, artistically and technically both. He gave voices to the different characters and delivered wonderful interpretations. The audio production quality was perfect, at the level of a professional narrator.

The title said it all

One long book of Eulogies. Lots of tongue in cheek humor with shades of Heinlein's Starship Troopers. I was given this free review copy audiobook at my request and have voluntarily left this review.

This one was a little bit different but not in a bad way. I'd recommend to anyone who listens to many books as I've long ago exhausted all the big league books available in the Sci-Fi and fantasy genre!

Killbugs, space and how it may turn you crazy

Would you listen to The Killbug Eulogies again? Why?

I might listen to some part again since I was distracted listening to the end of it. Pretty interesting turn of events and twisted characters through the ending.

What other book might you compare The Killbug Eulogies to and why?

I don't think of any book really.

The narrator really succeeded in performing his characters. He gave life to them. You can tell he chose every tones and voices to match the characters personalities.

This book was given to me for free at my request and I provided this voluntary review".

The Killbug Eulogies are a set of eulogies by a soldier in war on an enemy planet. Since the chaplain was killed, the commander decided the eulogy for troops killed would be given by the nearest soldier to them when they died. This happens to be Pvt. Timothy Archon for a bunch of them. The hilarious eulogies, describing the various foibles and nutiness of the troops will have you laughing histerically. These troops actually remind me of some of the people I knew in the Army, just magnified.The enemy, the Killbugs, giant mantis creatures, are scary as can be, but the description of some of the interactions is hilariously described. Especially the one where the soldier was fascinated by them, and wanted to, ah, spread intergalactic goodwill in an intimate manner with one of them. This is kind of grown up humor, but if youre looking for a fun listen, this one might just fit the bill. Will Madden has to be the best author narrator I have ever heard in hundreds of audiobooks. He really nails the voices and characterizations. Overall, a fun listen.

I was voluntarily given a copy of this audiobook by the Author through Audiobookboom.

It is Sci-Fi but not my cup of tea

An interesting approach to a familiar sci-fi theme

I was not familiar with the work of this author when I first came to listen to this book, but it sounded intriguing from the description of it and I was not disappointed as he takes an interesting approach to the fairly familiar sci-fi theme of space marines vs alien bug monsters.

Beyond the eulogy framework of the book, one thing that really stands out is the fairly dark humour in the writing, it is a tone that seems to suit the book perfectly.

Sometimes when an author reads their own book it can sometimes result in quite a dry reading without the level of performance you might expect from a professional narrator, but in this case the author uses his obvious familiarity with his own work to produce a strong narration that serves to enhance your enjoyment of the book.

Having enjoyed this book, I will definitely keep an eye out for other works from this author in the future.


[Note - I was given this free review copy audiobook at my request and have voluntarily left this review.]

Fingers in the sand

With four months left before the relief ship arrives to rescue any survivors of the military troop fighting a futile battle against the Killbug, large mantis like insects, and with their chaplain dead, the funeral eulogies are left to the men. One Timothy Arcon takes on the task when no one else will do it

This is a really unusual story comprising, in effect, ten short stories, risqué vignettes of nine men who die in somewhat bizarre circumstances, a thumbnail of each life and relationship with Arcon and the unit, and their own personal peculiarities. Often very amusing and certainly surprising, there is definitely a profound interest shown in genitalia in various guises. Each is also quite different from it's predecessors, my personal favourite being the life, and death, of Gilbert Rasher, the so called psychopath. The final chapter tells of the relief ship finally arriving to collect anyone still alive, with it's surprising extra passengers and even more outrageous ramblings.

Books narrated by their authors often leave a lot to be desired but, in this case, the performance is superb. Will Madden perfectly captures the voice of the sardonic, often sarcastic eulogy giver, Arcon, his fiction clear and unsurprisingly, his understanding and nuances of the text clearly demonstrated.With a lesser narration, this book could easily have become tedious with the fine emphasis lost alone the way.

Probably best listened to as short stories, heard with short breaks along the way rather than as one continuous whole, this is a fun story, of a little crude in parts. It is certainly original and immaginative in both construction and content. Funny, too. My thanks to the rights holder who freely gifted me a copy at my request, via Audiobook Boom. I enjoyed it very much.