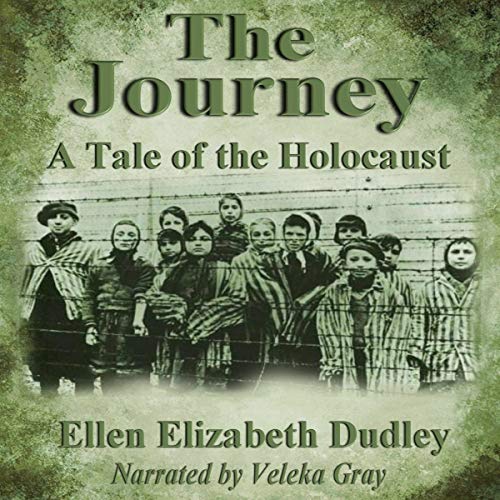 The Journey: A Tale of the Holocaust

By: Ellen Elizabeth Dudley
Narrated by: Veleka Gray
Try for $0.00

A dystopian tale of the Holocaust.

This not a tale of war or of suffering; it is, however, a tale of survival, a child’s bravery, and a mother’s revenge. In January 1942, concentration camps were constructed by slave labor in Poland. For the deportation of Jewish men women and children to these camps, railway transport was provided by the German national railway system under the supervision of the Gestapo, the SS, and the German police.

One of these children, Rachel Silbermann, a 10-year-old Jewish girl, was deported along with her family from Berlin to Auschwitz-Berkinau. By a miracle, she and her family survived the four-day journey in a cattle truck. These trucks were without heat, and, in most cases, only a bucket was provided for sanitation purposes.

When Rachel arrived at Auschwitz death-camp, she came, like many other children especially twins, under the auspices of Doctor Mengele, known as "Doctor Death". But a strange twist of fate found her caring for a group of young twins.

Her mother, however, unlike the rest of her family who perished, escaped and joined the Polish resistance where she learned a new trade and learned it well; she became a sniper, a very successful one.

What listeners say about The Journey: A Tale of the Holocaust

I received a copy of this audiobook at my request. I am providing a voluntary review:

Exactly what you want when you pick up a book about the holocaust. The narrator did an AMAZING job. The accents were amazing!

The Journey. .
A tale of the Holocaust told thru the eyes of a child. Touching and emotional story of one family's journey thru the Holocaust.
"Lest we forget".
I received a free copy of this audio book at my own request and voluntarily leave this review. .

I'm required by law to state that I received a free copy of this book in exchange for my unbiased review. I was given this free review copy audiobook at my request and have voluntarily left this review.

It's not much of a journey. Just kind of follows a few people but there isn't much of a story. It bounces around a lot to different characters and jumps from the beginning of the story to the end pretty quickly. Didn't really fear like I got to know any of the characters enough to care about any of them. It may have been a more enjoyable experience with a different narrator. This narrator uses a lot of really terrible accents that mske everyone sound like whiny devious Disney villains. And all the characters sound the same so it's hard to tell everyone apart. Kinda disappointed with this.

The Journey: A Tale of the Holocaust
: Ellen Elizabeth Dudley

A tale of a child's memories of the Holocaust, and many terrible things, most would never survive. A gripping, well told story. Remember all the people lost, especially the children.

The narration was well done. The characters were well portrayed by Veleka Gray.

A heartfelt tale of a horrific time

Yet another rich, heartfelt tale of a time most would choose to forget. Not only are the circumstances terrible, but for those living it, especially children, who were the innocents the whole time, had their share of horror as well. Well written, and expertly narrated, thank you Ms. Dudley and Ms. Gray.