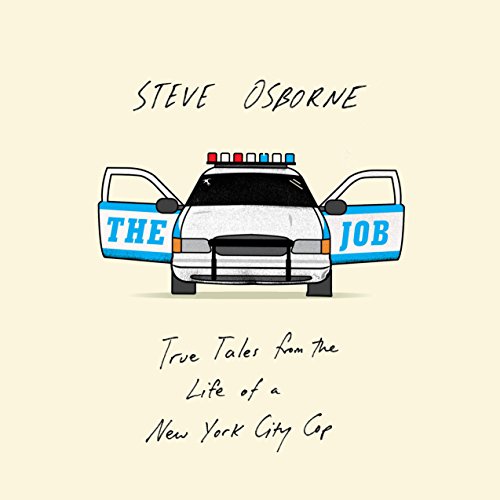 With these four syllables, delivered in an unmistakably authentic New York accent, Steve Osborne has riveted thousands of people through the legendary storytelling outfit The Moth (and more than a million times on their website) with his hilarious, profane, and touching tales from his 20 years serving as an NYPD street cop. Steve Osborne is the real deal, people, the tough, streetwise New York cop of your dreams, one with a big, big heart. Kojak? NYPD Blue? Law & Order? Fuggedaboutem! The Job blows them out of the water with this unpauseable book.

Steve Osborne has seen a thing or two in his 20 years in the NYPD - some harmless things, some definitely not. In "Stakeout" Steve and his partner mistake a Manhattan dentist for an armed robbery suspect and reduce the man down to a puddle of snot and tears when questioning him. In "Mug Shot" the mother of a suspected criminal makes a strange request and provides a sobering reminder of the humanity at stake in his profession. And in "Home" the image of his family provides the adrenaline he needs to fight for his life when assaulted by two armed and violent crackheads. From his days as a rookie cop to the time spent patrolling in the Anti-Crime Unit - and his visceral, harrowing recollections of working during 9/11 - Steve Osborne's stories capture both the absurdity of police work and the bravery of those who do it. His stories will speak to those nostalgic for the New York City of the 1980s and '90s, a bygone era of when the city was a crazier, more dangerous (and possibly more interesting) place.

Stories from The Moth courtesy of The Moth.

"Cops are innately good storytellers, and Osborne must be one of the best." ( Booklist)
"Steve Osborne is a born storyteller, and anyone expecting a cop book to be filled with action and adventure won't be disappointed with The Job. But what makes this story so powerful is its compassion and bittersweet comedy, the unexpected moments in which the worst situations bring out the best in people. Anyone who knows a cop - or wants to - should read this book." (Edward Conlon, author of Blue Blood)
"Nobody tells a cop story better than a cop, and Osborne tells them as well as I've ever heard (and I've heard a lot of them). Go buy this book, for the chases, the laughs, and the poignancy. Go buy it now, especially now, because for every bad cop there are 20 heroic ones - and Steve Osborne was one of them." (Brian McDonald, author of My Father's Gun: One Family. Three Badges. One Hundred Years in the NYPD)

What listeners say about The Job

I heard an interview with the author on NPR that they were running with the launch of the paperback which is what prompted me to buy this one. Usually you do not want a book read by the author. In this case, you would want no one else! The stories were alternatively funny and heartbreaking but the telling was spot on for all.

This guy is fantastic!

Great stories a I hope to hear more! I was a cop and some of these really got to me. It's too bad he retired so soon. He tells itlike it is. Some people need an ass beating and others are a victim of their environment and deserve a break. Cops really do cry. This book will make you laugh and cry.... even the liberals.

Loved getting a glimpse into the world of a NYPD officer. I hung onto his every word and even found myself circling the block a few times to continue listening to his funny stories before finally pulling into the drive way. Highly recommend to anyone looking to enter the criminal justice field or just looking to be entertained. This is the book for you!

If you're a cop, used to be a cop, want to be a cop, think you're a cop, know a cop, love a cop, or hate a cop... this is your book. Coming from a far different environment with an astoundingly similar job to do, the universal truths in Steve's stories are undeniable, and undeniably presented in the best voice to tell them. As the ticker wound down and I saw I only had 3 chapters... 2 chapters... 1 chapter left, I became sad knowing it would end. I'd love to see more from Lieutenant Osborne in the future. If you give it a listen you'll find yourself wishing you could buy the man a beer. Top notch storytelling.

This is an author who also knows how to narrate, and having the author also serve as the narrator added an extra level of authenticity to the stories that were told. I listened to the whole thing in three days. I laughed, I got emotional, and at times I felt compelled to contemplate my own life. I cannot recommend this book enough!

Steve Osborne brings this book to life! I loved the New York accent and attitude!

One of the best titles I've done on Audible, Steve is an amazing story teller. My one complaint is I wish it were longer. I don't think I could reccomend listening over reading enough in this case. Steve's accent really deives it all home.

Perception vs Real Facts of Live

Yes I love it. It was easy reading and listening. Very delightful, pleasant and charming. It really helped me to appreciate more the work the police do. We as civilians must of the time don't understand all the circumstances and the facts of the realities that a law enforcement officer is challenged with. Of course every where there is good and bad peplo but being a police officer is the hell of a job and your life is always in the front line. It is easy to judge but we gotta put ourselves in those situations for a moment. If there is a movie ever created out of this book I believe is going to become 5 stars classic of all ages. I really like it.

As a cop, I enjoy telling and hearing "war stories."

This book is about 12 or so stories, some interesting, most not, and all drawn out way longer than they need to be. The author could have edited them down to 15 minutes a piece and included many more stories. Instead you end up with 40+ minute diatribes and will find yourself saying "get on with it already."