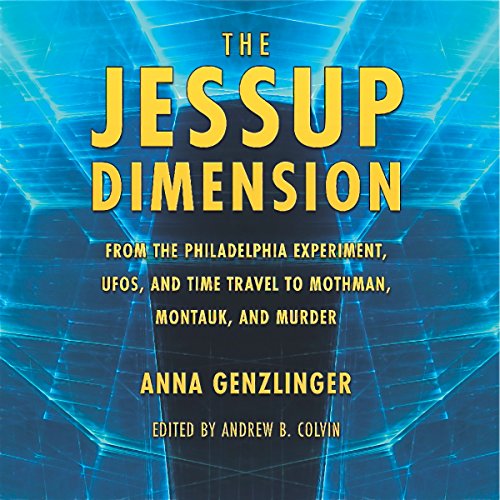 In 1959, on April 20th (a date that has hosted a succession of terror events in recent years), noted astronomer and ufologist Morris K. Jessup was found dead in his car in Dade County, Florida - an apparent suicide. Jessup, a firm believer that UFOs were not from outer space, was the first researcher to expound intelligently on the terrestrial thesis, and his death sparked rumors that he had been taken out by the thuggish enforcers of the extraterrestrial thesis, the Men in Black.

Through a series of odd psychic messages, Anna Genzlinger, who had read about Jessup in a book about the Bermuda Triangle, was spurred to investigate his death as a murder, not a suicide. Genzlinger, who felt that Jessup had been driven to kill himself by government agents (because he knew too much about the Philadelphia Experiment), collected evidence to substantiate her intuition.

The result was The Jessup Dimension, first published in 1981 by Gray Barker's Saucerian Press. By the time Barker died in 1984, the book had been thoroughly suppressed, eventually becoming so rare that original copies fetched thousands of dollars.

In this book, taken directly from the original manuscript, Genzlinger describes in gripping detail how Jessup's ghost guided her in her investigation. Despite being warned off by several spooks in the UFO field, Genzlinger courageously continues on, ignoring threats of her imminent demise.

What listeners say about The Jessup Dimension