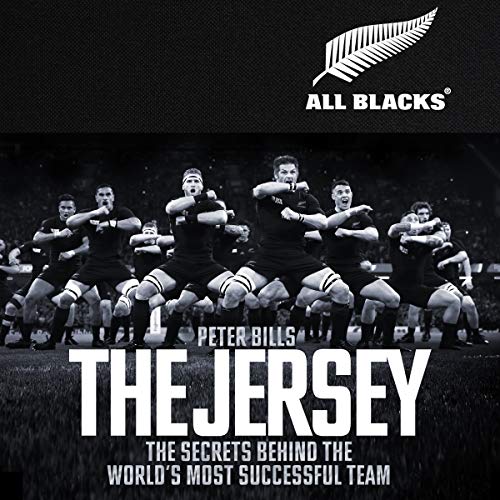 By: Peter Bills
Narrated by: Mike Sengelow
Try for $0.00

New Zealand rugby is a dynasty that transcends all national barriers. As a culture and a model of humility and consistent success, which have led them to three Rugby World Cups, the world of rugby continues to look to the New Zealand model for guidance.

Traditionally, the renowned All Blacks and those charged with guiding them have kept their rules of engagement close to their chests. However now, New Zealand Rugby has agreed to open their doors to rugby writer Peter Bills to consider the reasons behind their dominance of the world game in the build-up towards the Lions Series in 2017 and Rugby World Cup 2019 in Japan. Through this audiobook, Peter Bills draws on case studies and interviews of officials, coaches and players as well as people involved in all elements of rugby right across New Zealand. The Jersey tells an extraordinary story with unprecedented access and insight and explores the basic requirements and immense challenges required not only to become number one in the world but to remain consistently at the top.

What listeners say about The Jersey

I bought this audio book for insight and inspiration that can be brought into the business world. As a Springbok supporter, I found the story of the All Blacks incredible.

A must for all rugby fans. Makes you understand the world of being an AllBlack

A well-researched and well written book. As well as rugby, it delves into the culture and mindset of the New Zealand nation and you are then able to connect the dots from their psyche all the way through to the All Blacks itself, gaining a better understanding on why they have remained peerless for decades. A very honest account of NZ rugby, not afraid of criticising the All Black if needed. Well narrated and enjoyable.

The books history was great but when the narrator spoke about guests you thought that the person would have spoke there lines not a attempt to be the person and accents..didn't work for me..sorry

interesting insight but arrogance too

worth a listen for rugby fans

I wish the narrator could correctly pronounce maori and Samoan names. he also does funny accents when speaking on behalf of south African and Ireland legends. It's a bit cheesy.

A brilliant listen...touching on a lot of what makes this team so successful for well over over century

really good to lisen to recomended to everyone