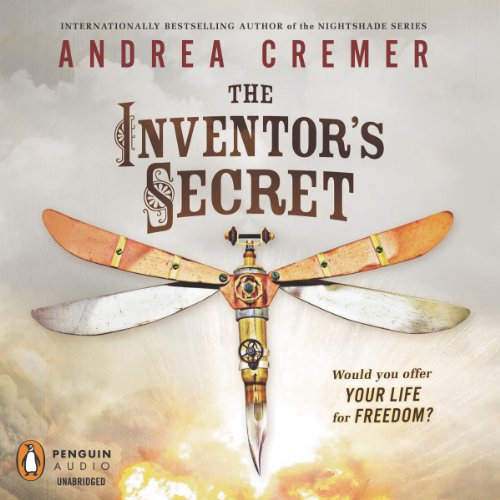 By: Andrea Cremer
Narrated by: Leslie Bellair
Try for $0.00

In this world, sixteen-year-old Charlotte and her fellow refugees have scraped out an existence on the edge of Britain’s industrial empire. Though they live by the skin of their teeth, they have their health (at least when they can find enough food and avoid the Imperial Labor Gatherers) and each other. When a new exile with no memory of his escape or even his own name seeks shelter in their camp he brings new dangers with him and secrets about the terrible future that awaits all those who have struggled has to live free of the bonds of the empire’s Machineworks.

The Inventor’s Secret is the first book of a YA steampunk series set in an alternate nineteenth-century North America where the Revolutionary War never took place and the British Empire has expanded into a global juggernaut propelled by marvelous and horrible machinery. Perfect for fans of Libba Bray's The Diviners, Cassandra Clare's Clockwork Angel, ScottWesterfeld's Leviathan and Phillip Reeve's Mortal Engines.

What listeners say about The Inventor's Secret

What did you love best about The Inventor's Secret?

I like the alternate reality. The characters were each well defined.

The performance was well done. She identified each characters well with her voice.

This is the first steampunk book I have the opportunity of reading (listening to). I enjoyed the alternate reality story line and the eclectic characters. This book is written for a TA audience. As an adult, the story came through as immature at times; especially when it addressed Charlotte's infatuated feelings. I addressed those with a few rolls of the eyes.

Sometimes it was also difficult to believe that a young girl who was not raised in the ways of society, found it so easy to play the part of a debutante. I was expecting more conflicting emotions and feats.

I enjoyed learning about the different classes and how they intertwined. Although there were several main personas in the story, they each were unique in their own way. They contributed to the tale as needed without bringing confusion as to who is who. The descriptions of the different apparatuses used in the book were quite clever.

Overall, I enjoyed this quick read.

I enjoyed this book a lot. It got me hooked quickly with the steampunk theme and alternate universe. The only flaw was the readers voice for the character Grave, it felt too childish for me and I found it annoying at times. But for the rest of the characters she voiced well for their personalities.