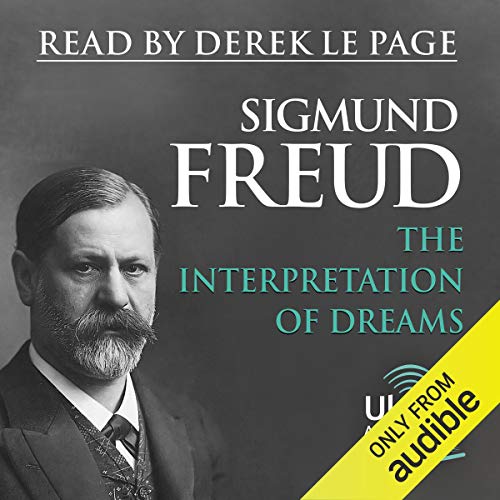 The Interpretation of Dreams

By: Sigmund Freud
Narrated by: Derek Le Page
Try for $0.00

The Interpretation of Dreams by Sigmund Freud is one of the most significant books of the 20th century. Though dreams and their role in human consciousness have been a continuing thread in religion and art and life down the centuries, Freud's look at the subject through the prism of his emerging practice and study of psychoanalysis provided a startlingly new and challenging perspective. First published in German in 1899, it sold slowly; but over the following decade he revised and expanded it in response to his experiences working with patients, reviewing his own dreams, and discussions and debates with colleagues. It was translated into numerous languages.

In this extensive work he considers the meaning of dreams experienced by individuals generation after generation: dreams of flying, of death, of anger, of sex, of fear, of power. What do they signify, in general terms and in relation to individuals and their own personal situations? In this seminal book, Freud relates and discusses case histories and the effects of analysis. The remembered dreams have navigated the various passages of unconscious and preconscious filters to emerge into daylight, undergoing internal censorship and wish fulfilment and change and many other factors. So what are these dreams really saying or revealing? What anxiety or hope are they signaling? Sexuality plays a key role - this book contains the first emergence of Freud's Oedipus complex, among other sexual issues.

The Interpretation of Dreams is not an easy book - Freud himself produced an abridged version. But its influence on the 20th century, and particularly on Western awareness and society, cannot be underestimated. This classic translation of The Interpretation of Dreams by A. A. Brill dates from 1932 and contains all the major revisions made by Freud, and his footnotes. It has an important place in the audio recordings of Freud's major work, read clearly by Derek Le Page for Ukemi Audiobooks.

Featured Article: All the Audiobooks in "The White Lotus"—and What Listeners Really Thought


For most, a "beach read" tends to be easy to digest. On HBO’s new hit series The White Lotus, however, that standard is questioned. Throughout the show, characters consume challenging texts from Nietzsche to Malcolm Gladwell while lounging at the luxury resort. If you are looking for an opportunity to up your game for your next beach visit, look no further than this list of books we spotted in the show—in audio, of course, to help them go down easier.

What listeners say about The Interpretation of Dreams

What he really wrote.

Glad I did it. Glad it’s done. Freud of course is one of those foundational writers, important to psychology, philosophy, literature, and art, that everyone thinks they know but no one actually reads. There is some fascinating stuff here, and the narrator at least makes it (relatively) painless.

if you are the kind of intellectual that appreciates or can tolerate Noam Chomsky lectures or writing then this book is for you.
Freud puts a lot of effort into dismantling his own theory on The Interpretation of Dreams and that makes this book very enjoyable if you are someone who is currently a STEM major. The habit of scientific rigor has been lost from the psychological and political discussions nowadays and it is great to hear from a brilliant mind that was good enough to enter into new territory and also welcome all criticism.

Many political idealogue's would learn a lot about themselves and the topics of their interest of they were to handle their research the way Freud does.

yeah anyways if you can handle dry and informative this book will blow your mind. the narrator sounds great at 2x

All of it is sexually focused....obviously

Tried to go in with a open mind and failed. Only looked at it for university purposes. Not a book worth wasting a credit on.

Derek Le Page gives a first-rate reading in the personality of Freud, with good German pronunciation.

It's the Freudian brain at work.

A very long book, worth the dedication to finish it. Hours of entertainment, a fascinating look into psychiatry.

I have enjoyed this book. It is often said that Freud is outdated and that he tends to explain everything with sexual repression, and although I am not going to refute these statements, I am going to state that he has made an impressive stand with his Interpretation of Dreams.

Whereas many (old) sources approach dreams by assigning a general meaning to the different images as seen in the dream, Freud explores the experience and association he himself has in relation to these images. This approach turns dream-symbols into personal phenomena and gateways into one’s own psyche. This approach is the true backbone of this book and although Freud is often vague and inconsistent, the idea that a dream is to be seen as the reflection of the mind of the dreamer probably still holds ground today!

The narrator reads clearly and the book consists of several footnotes that expand on the text itself. As is so often the case, Audibe has not named the different sections but has labelled them 1 to 120.