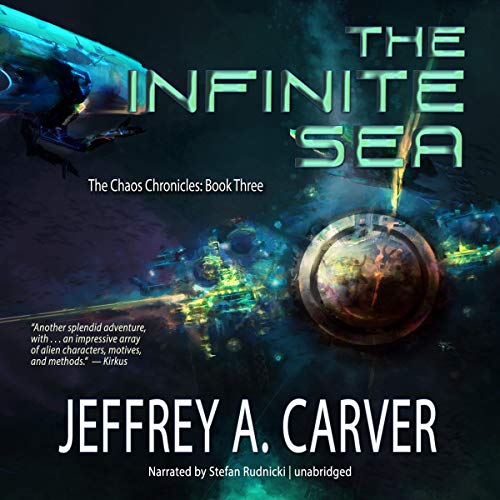 By: Jeffrey A. Carver
Narrated by: Stefan Rudnicki
Try for $0.00

John Bandicut and his company have been rewarded for their heroism in saving Shipworld. The prize: to be flung back into inhabited space — not to their home planets, as they had hoped, but to the bottom of an alien sea. Helpless and sinking, they are rescued by strange mer-creatures and brought to an undersea city, where a race of sea-people known as the Neri live in perpetual twilight. The Neri are well adapted to their world, but their survival is in jeopardy. They face danger from a warlike surface people called the landers, from a failure of their irreplaceable deep-sea factories, and from a terrifyingly powerful entity called the Maw, stirring to life in the abyss beneath their cities.

Was the company brought here to help the Neri, as alien powers once came to the aid of Earth? What help could they, or perhaps their translator-stones, offer these imperiled sea-folk? For Bandicut, the discovery of the true nature of Maw of the Abyss is the beginning — but only the beginning — of an answer.

This undersea chapter of the immensely popular Chaos Chronicles is not to be missed! Another interstellar adventure from a master of the craft, Jeffrey A. Carver.

With an afterword by the author.

"An absolutely terrific book. Carver is heir apparent to Larry Niven as the king of hard SF: his stories revolve around ideas that are every bit as big as Niven's, and his aliens are every bit as fascinating. Chaos theory says outcomes are unpredictable, but here's one that's a sure thing: if you start reading The Infinite Sea, you won't be able to put it down until the very last page." (Robert J. Sawyer)

"Carver scores again. Gives us mystery, high adventure, and the sense of wonder in the grand old tradition." (Jack McDevitt)

What listeners say about The Infinite Sea

where to listen but a little too much fantasy

I like the office character development and some of the strange kinds of situations that his characters get involved in. since this started out as a trilogy I decided to get the first three books but apparently it's turned into a 7 book series. books 5 and 6 are not available on audible yet and book 7 hasn't been written yet. maybe when the rest of the series is available I'll pick them up but at this point I'm not going to continue to the next book.

I got book 1 as a free download and have been drawn into this series. I enjoy the flawed characters that must work together to resolve the conflict that firms the backbone of each story. I am looking forward to the next 4 books (?) to see how the John Bandicot story ends.

I definitely enjoyed listening to this book. I like the characters and their fairly well developed. Though I have to admit I am somehow left partly unsatisfied by the end of the book, I would Definitely recommend.