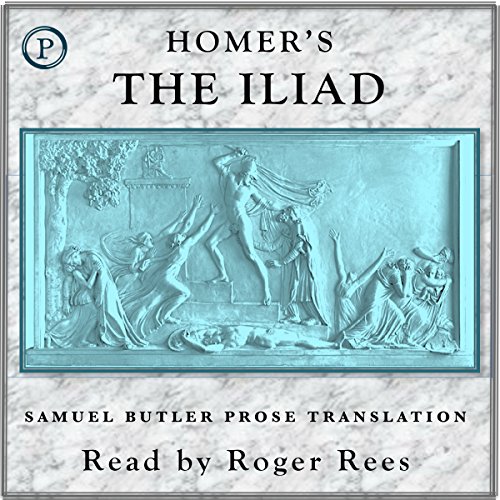 By: Homer,Samuel Butler - translator
Narrated by: Roger Rees
Try for $0.00

One of the true masterpieces of all time, The Iliad tells the story of Achilles, the greatest warrior of ancient Greece, and how his wrath brought about the fall of the city of Troy. The Iliad contains the very essence of the world of ancient Greece - mysterious, implacable, metaphysical, heroic, and tragic, a world in which honor is both man's highest integrity and his downfall. It speaks across the ages of the tragedy and grandeur of the human condition. Originally meant to be heard rather than read, this great epic returns to the oral form for today's listeners. (Translated by Samuel Butler)
(P)1998 by NewStar Media

What listeners say about The Iliad

I hesitated over buying this for a long time, for one simple reason: Samuel Butler, in his translations of Homer, used the Roman names for the Greek gods: Jove and Juno and Minerva rather than Zeus and Hera and Athena. (Some recordings and some recent editions of Butler "correct" this, but the recording by Roger Rees follows Butler's original text.) This turns out to be a stupid reason. Rees has long been one of my favorite actors, and his reading of the Iliad is impassioned and enthralling. The abridgement is a careful one, communicating the overall narrative of the poem while at the same time retaining many of the digressions and touches of character. I still regret Butler's choice in names, and the recording's decision to follow him, but if you want a taste of Homer, you should really consider this fast-paced and moving performance.

Get ready for Troy

I thought it would be fun to reread the Iliad before seeing the movie Troy which comes out in May. I was right. This book was wonderful. I had forgotten how exciting it is. These are some of literature's greatest personalities. I'm only sorry I didn't get the unabridged version.

Well read, but disappointed by how this abridged version ended. This narrative began at a reasonable spot with the duel between Menelaus and Paris, it however ended with the funeral of Hector. A more appropriate ending point would have been either the death of Achilles or the death of Paris. This is just my opinion.