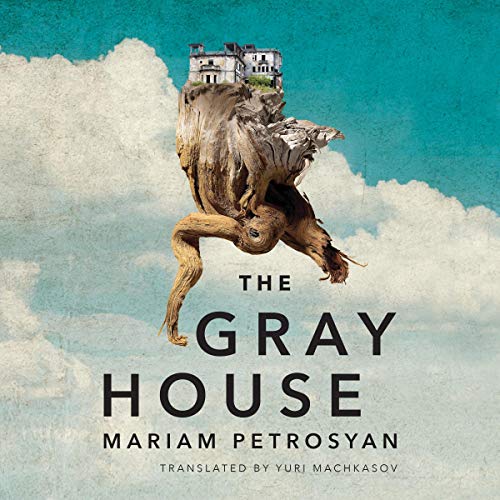 The Gray House is an astounding tale of how what others understand as liabilities can be leveraged into strengths.

Bound to wheelchairs and dependent on prosthetic limbs, the physically disabled students living in the House are overlooked by the Outsides. Not that it matters to anyone living in the House, a hulking old structure that its residents know is alive. From the corridors and crawl spaces to the classrooms and dorms, the House is full of tribes, tinctures, scared teachers, and laws - all seen and understood through a prismatic array of teenagers' eyes.

But student deaths and mounting pressure from the Outsides put the time-defying order of the House in danger. As the tribe leaders struggle to maintain power, they defer to the awesome power of the House, attempting to make it through days and nights that pass in ways that clocks and watches cannot record.

What listeners say about The Gray House

Wonderful book that I would definitely recommend! The book took place at a school that was set somewhere between reality and another world. The students grow, change, and come of age within the walls of the Gray House, exposing their adolescent problems and fears along the way. The book moves from student to teacher and back to student which gives a wonderful look at the environment, events, and the cast of characters from different points of view.

As the story develops, you're left wondering about the nature of a particular student named Blind. Blind is a fantastic character, part hero and anti-hero, taken in by the "rules" of the house and someone displaying sociopathic tendencies or the behaviors of someone not quite human. At the end of the book, you are still wondering which it is. In the meantime, you're watching the students grow up, develop distinct personalities, and learn what it is to stand on their own as individuals. This is important for them to learn because they had spent their lives engaging with the collective whole of their school groups with friends that are more like family. The students become inexorably linked to the House and breathe life into its walls through a collective consciousness that envelops all the students at the school. The setting becomes another character as the book moves along and you're left wondering if the house doesn't have a life of its own...

Have you listened to any of Scott Merriman’s other performances before? How does this one compare?

I had not listened to any of this narrator's books before and I did not become a fan here. He has little inflection in tone, which can be a challenge with such a long read. He also over pronounces the "w" which is an affectation that has always bothered me so it was hard to hear for 36 hours of this book. The story was so good that I kept listening, but had I not liked the book so much, I would not have cared to listen to a whole book narrated by Merriman. I may buy the book in print and read it next time, instead of listening to the narration again.

While this is a book that I would have listened to in one sitting, it's not possible to do that with such a long book. Once you start hearing about the students, their lives, their cliques, and their associations with other groups, however, it becomes an all-absorbing narrative.

It's a book that deserves more than one read, you can't take it all in at once. I will revisit it again to see what else I can pick up among the students and teachers of the house.

a puzzle in the form of a novel

Usually when a book gets such divided reviews, I assume the positive ones are fake. In this case, both sides are justified.

The novel is a sort of puzzle, where part of the fun is figuring out what happened. You aren't told directly – you have to piece together clues from (often unreliable and contradictory) characters in intertwined timelines. The past and present are not clearly defined, and characters have different names from one to the other. You're always looking for hints about which early character grows up to be a later one.

There is also a fantastical element to life in the House, but its magical mechanisms are never explained – you have to piece it together from the experiences of the characters. It's possible that the House is a gateway to some other realm, but it's also possible the characters were simply drunk or high when they talk about this. Did a character disappear because she moved to some distant place, or was she never quite real to begin with?

There is a burden on the reader to make sense of it all. If you like fast-paced books with clear plots and characters with cleanly defined motives, then this is definitely not the book for you. There is no point soldiering on in hopes that the pace will pick up or the plot will make sense – it won't. This isn't a case of, 'you either get it or you don't.' It's more that nobody really understands it entirely, but some people are ok with that. The Gray House is simply not for everyone.

If you do find yourself sucked into the world of the House, you will feel as if you are there yourself, untangling its mysteries along with the other inhabitants. By the end, you'll be ready to start reading it again, armed with new perspectives you didn't have the first time. (I bought the paperback after listening to the audiobook – a first for me.) This novel isn't a passive read; it's an experience.

Some people “get” this book. Some don’t.

I’m blown away by this book. I know this has a cult following in Russia and maybe it just doesn’t translate to some people. It took the author 20 years to write and you can feel her heart and soul in it. I listened to it with a book club silviacachia.wordpress.com which helped me understand some of the the symbolism. I would say it’s Hogwarts meets Fear and Loathing in Las Vegas meets Lord of the Flies. It’s definitely not a superficial read/listen but if you are into these types of books ie. Kafka, Gabriel Garcia Marquez, Dostoyevsky, you’ll “get” this book.

The Gray House defies comparison. Truly a first of it's kind. A winding, complexly patterned and immensely satisfying work fiction. As original as it was enjoyable.

I'm still trying to figure out what I just read.

I think some of the magic got lost in translation, and the narrator didn't really help to distinguish one character from another. Add to that the lack of linear time and the unreliable narrators, and a premise that had really intrigued me just made me confused.

Is there supposed to be a plot?

Couldn't stand the narrators over-annunciations, and there is more empty detail than actual story. 10 chapters in I'm still trying to figure out if there's a plot or if it's just bland babble. Couldn't finish it.

I found this book to be obscure and difficult to keep track of the characters. Not my cup of tea.

Narrator hard to listen to

I really couldn't give this one a chance because Scott Merriman's narration was so annoying that after 2 hours of listening to him hyper-pronounce hard consonants, I just couldn't listen to him another minute. Also, although his narration couldn't be described as robotic, he spoke in the EXACT same "voice" for every character - adult or teen, male or female - which made it very hard to understand who was speaking. I will probably try reading this one on my Kindle.

I can't believe that I forced myself to keep reading way past my "Nope, not for me" limit........ A waste of time.

I tried to like this, and tried to start it over several times, and ultimately ended up putting it down about a quarter of the way through. Just wasn't for me

It’s hard to quantify exactly why but I found it really hard to become immersed in this book. Perhaps it lost something in translation. The reading was very precise, with each word fairly slowly emphasised which contributed to the lack of flow. The idea is interesting and novel but I did not look forward to listening. In fact I gave up after about 6 hours.

Tried to listen to this book last year and only managed 80 mins before I gave up. Decided I would give it another go and am really glad I did.

Once I got use to the style and the jumpings in time, I learnt to really love the characters and enjoy there company, I will miss them greatly.

Would recommend this book to listeners who enjoy people like Mervyn Peake and Haruki Murakami.