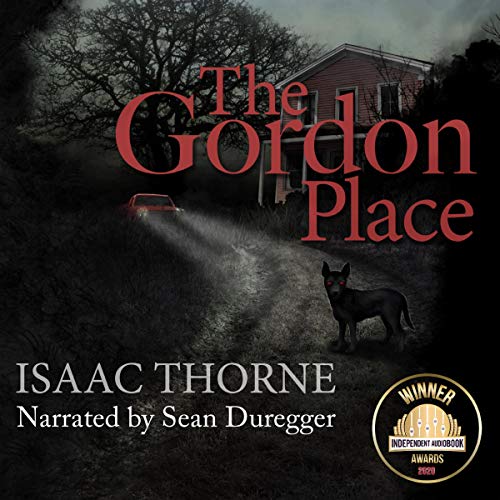 By: Isaac Thorne
Narrated by: Sean Duregger
Try for $0.00

Lost Hollow constable Graham Gordon just walked into his abandoned childhood home for the first time in 20 years. Local teenagers have been spreading rumors about disembodied screams coming from inside. Now, thanks to a rickety set of cellar stairs and the hateful spirit of his dead father, he might never escape.

Meanwhile, Channel 6 News feature reporter Afia Afton - whose father is the victim of a local decades-old hate crime - is meeting with town administrator Patsy Blankenship. Her mission is to develop a ghost story feature for a special to air on the station's Halloween broadcast. When Patsy tells her about the screams at the Gordon place, the past and the present are set on a collision course with potentially catastrophic results.

Can Graham come to terms with his father’s past and redeem his own future? Can the murder mystery that has haunted Afia for most of her life finally be solved?

It’s a fight for the future and the past when spirit and flesh wage war at the Gordon place.

What listeners say about The Gordon Place

Really enjoyed The Gordon Place! Isaac Thorne did a good job making you feel like you were in the story with the characters. Sean Duregger was a great narrator, I loved the different voices for each character. Helped the story come alive even more.

This was a great audiobook. both narration and writing were on point. Highly recommend

I really enjoyed this story for its twist on the typical ghost stories. There is some awful racism in this book, but if taken in context of the character using such ugly words it fits. It shows how it can be overcome in a new generation. It made me angry that these attitudes are still a part of today's society. I would recommend this book as it kept my interest throughout. The narration was spot on as well.

The narrator was perfect for this story. The storyline was great and the character development was done well.

I received a free copy of the audiobook from the author in exchange for an honest review.
I’ve read a few of the author’s short stories in my time, and found them to be entertaining and creative, but I haven’t read one of his full-length novels yet. Until now. I gotta say, I liked it. The Gordon Place is about a haunted house, and the ghost is about as nasty as they come. He was the former town sheriff, who “disappeared” years ago. His son, the new sheriff, owns the Gordon Place, and falls foul of the ghost when he visits his old home Also drawn to the place is a reporter and her cameraman, and the town administrator. What they find is something they didn’t imagine when they got out of bed that morning. Here’s my thoughts on the book:
The characters are an interesting bunch. Lee, the ghost, is simply awful. A racist, a child beater and a bully, using his power as a white cop in a predominantly white town to get away with all manner of stuff. His son is the opposite, a product of abuse who hasn’t really found his way in life, and was voted into the sheriff’s office merely because no one else wanted it. Patsy the administrator still has dreams of her small town appearing on the national ghost hunting circuit, and the arrival of some news people puts her into overdrive. Afia, the reporter, is a former town resident who left after her father was murdered in a hate crime, while gay cameraman Staff has his own concerns with small town life
At the start of the book, the author writes a proactive apology for his character of Lee. who as I said earlier, is awful. His constant racism, his brutality to his son and others, will likely make some people put the book down. However, as Thorne finishes his apology for putting this creature in the book, he says “such people do exist in the world.” Which is true. But Lee is an interesting character, and he earns a lot of page time as he tries to figure out why he is a ghost in the first place.
Afia is also one of the better characters, as her return to the town of Lost Hollow sparks a lot of memories that she had kept hidden. As she investigates the haunted house, and the mysterious black dog that pops up around the place, she discovers more about her past than she really wants, Graham too is heading too far down memory lane than he would like, and they find that their respective histories are intertwined more than they may have liked, or remembered
The narrator does a fine job with each of the characters, particularly the nasty Lee, giving him the personality and drawl we’d probably apply if we were reading. The other characters are solid, and the voices of the women are pretty good, compared to other narrators who are less capable. He also helps drive the story forward at a solid clip, matching the text, I would imagine
If there was one letdown for me, it was the climax, which veered into silliness at times with the dog and the ghostly realm. That being said, I did like the knock knock jokes. I’ve read/listened to a lot of horror lately, and this has been the best so far.
Verdict:
A decent modern haunted house yarn.

When Graham decides to return to his childhood home, he’s not sure what to expect. The place has been abandoned for years, and in the shadows lurk his memories. The worst of which are tied to his father. To save himself, he must get to the bottom of his father’s twisted past.

A unique twist on a haunted house tale. There’s quite a bit of racism in the story which made it hard for me to get through because I was constantly rooting for the downfall of most of the characters. The author did a good job of showing three different POVs, and their way of handling the prejudice in the small town. This story has plenty of tension to draw you in and hold you tight.

A very good story.A 'haunted' house is now in the hands of the man who grew up in it.Unfortunately his ghosts still exist in it.At the same time a tv crew comes to town to do a story for Halloween. Sean Duregger was a fine narrator.I was given this free review copy audiobook at my request and have voluntarily left this review.

Loved the story. It is enthralling. Catches your attention from the beginning, then you can’t stop until it’s finished.

The narrator does a great job keeping you involved in what’s happening.

This review is voluntary for a free copy.

This was alright, wasn't what I expected. The narrator did a good job. A pretty good plot.

I really enjoyed this book. It's an old fashioned horror story, creepy and well written. The story keeps you captivated all the way through. The narrator did a great job.

It’s a fight for the future and the past when spirit and flesh wage war at the Gordon place.
great book amazing from start to end book 2 please