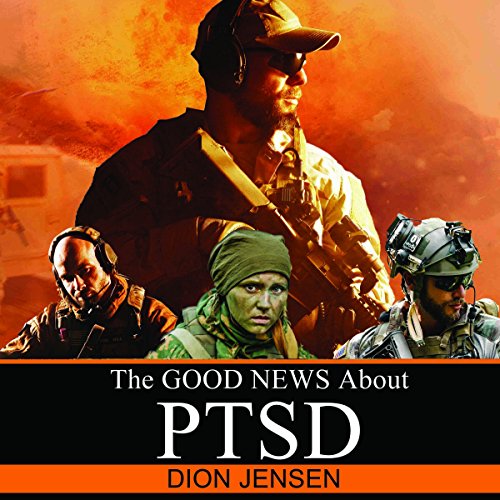 The Good News About PTSD

By: Dion Jensen
Narrated by: Dion Jensen
Length: 5 hrs and 53 mins
Categories: Self Development, Motivation & Inspiration
5 out of 5 stars 5.0 (4 ratings)

The Good News About PTSD

That was my first thought when a civie boss clicked his fingers at me and pointed at me to "come here!" (He backed off at speed when he saw the look in my eyes.)

If we were on live ops I would have put two rounds center mass and one in his head! Out here in the world, if he was within arm's reach I would have already punched him in the throat!

My reactions are automatic because my subconscious bodyguards are highly trained.

Unfortunately, after one of my best mates was killed in Iraq, reacting to a perceived threat with violence was a common occurrence which I had to get under control...especially when my daughter snuck up behind me to give Daddy a fright....

She saw the look in my eyes and I saw the fear in hers...and the journey that resulted in this book began.

You are not alone, you are not crazy, and you can beat this. How do I know? I've been there.

Through the army, police, and Iraq, combined with the normal life challenges we all face, I would display signs and symptoms that would match the clinical terms for PTSD...but I disagreed that these behaviors were a disorder at all.

Don't get me wrong, the trauma you went through is real, you may be suffering nightmares, flashbacks, insomnia, or you are a werewolf like I was, but these are perfectly normal responses to what you have been through.

Thank you for this raw, genuine, glimpse into your journey. It was perfect. Laugh, cry, have a few epiphanies, and carry on listening or take a break and contemplate. Love that the author narrated the book. I had goosebumps most of the 5+ hours I was listening. This is an intense listen. This book will leave you with much to contemplate; and even better, a good attitude. All those words though, might leave ya a bit speechless(like me right now lol) Or, it could open the cascade of words you've not been able to pin down for what you are experiencing or seeing in yourself or people you know. The author also provides info for contacting him directly, and other resources to continue your own journey. I will be listening again, and recommending this book to everyone I know. It would have been nice to have a paper copy or downloadable text to read or reread some portions while listening. I hope audible gets that taken care of soon. This was my 1st audiobook, so I had no idea what to expect. That would also mean, this is my 1st audiobook review ever.

An amazing book, writen from the heart, for soldiers struggling with PTSD by one of their own. A book that will undoubtedly save lives, provide hope and healing and, fot those of us who are not military, engender a greater level of understanding of what our defence forces deal with on a daily basis. An emotional read.