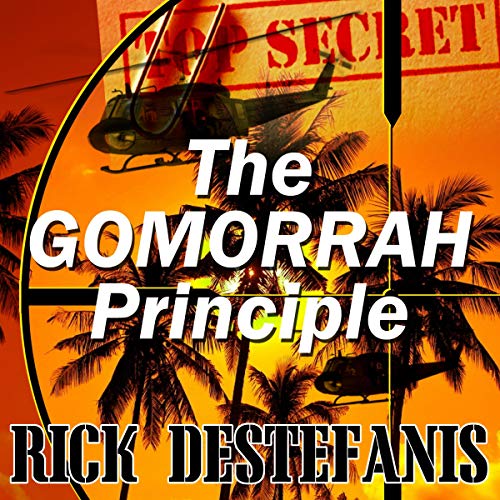 By: Rick DeStefanis
Narrated by: Stephen Woodfin
Try for $0.00

The Vietnamese called the young sniper Hổ xảo quyệt, The Cunning Tiger. Brady Nash believes his friend Duff Coleridge has been murdered in Vietnam, possibly by a rogue CIA advisor. As he seeks out the Special Operations Group in which Duff was working, Brady’s reputation as a sniper grows to legendary proportion. The truth slowly emerges, only to leave him trapped in a morass of espionage, murder, and intrigue. Brady’s every instinct tells him he has found Duff’s killers but his quest for final proof puts him dead in their sights. Winner of the 2014 Readers’ Favorite Silver Medal Award for military fiction, The Gomorrah Principle takes listeners through the back alleyways of Saigon, into the war torn streets of Hue, and beneath the darkened triple-canopied jungles of the Central Highlands of Vietnam. This gripping tale is a pause-resister and a “must-listen” for lovers of historical military fiction.

What listeners say about The Gomorrah Principle: A Vietnam Special Operations Thriller

Edge of your seat thriller

Brady Nash signs up to join the Army to fight in Vietnam.  Those left behind cannot fathom why he joined but he knows he’s going there to discover who killed his stepbrother, Duff Coleridge.  Painstakingly Nash builds his skills and talents until his sniper skills become infamous and he is recruited into the Special Operations Group. The same one that his brother was in and where his killer lurks.

The killer figures out who Nash is and tries to kill Nash but is thwarted time and again, until Nash is shipped home.  Not only is Nash faced with the hatred of protestors but now the killer is on his home soil with one intent – to kill Nash.    This is a powerful story that hit home due to the accuracy of emotions, hate-filled protestors, reacclimating, the nightmares, and more.

The story moves slowly at first, because the author, Rick DeStefanis builds the story carefully giving the listener time to become absorbed into the story.  The challenges that Nash faces in Vietnam are both ethical and moral.  To catch the killer, must he become as indifferent, greedy and uncaring as well?

Nash is a “good ole boy” from the back hills of Kentucky.  DeStefanis is meticulous into capturing the essence of the “good ole boy” and does it well.  Each character is realistic and meaningful to the story.  Not only does the narrator perform this book very well, but it is the realism of the story that enables the listener to become immersed.  Rich in vivid details and descriptions DeStefanis allows his listeners to “see” the story unfold.

The narrator, Stephen Woodfin, does an excellent job of capturing the essence of Nash adding to the realism of this character.  At first, I didn’t like his slow speech cadence, but I came to appreciate it as it reflected who Nash was over time.   Woodfin does a good job of voices; each character was recognizable.

This is not normally the genre I would select to read on my own, but I am delighted that I was asked to review this book.  It brought back memories and emotions that I had had when my uncle went to and returned from Vietnam – the accuracy of the emotions, and such was spot-on.  I enjoyed listening to this book.  It was an edge of your seat thriller.

There were no issues with the quality or production of this audiobook.  It was clear and well done.