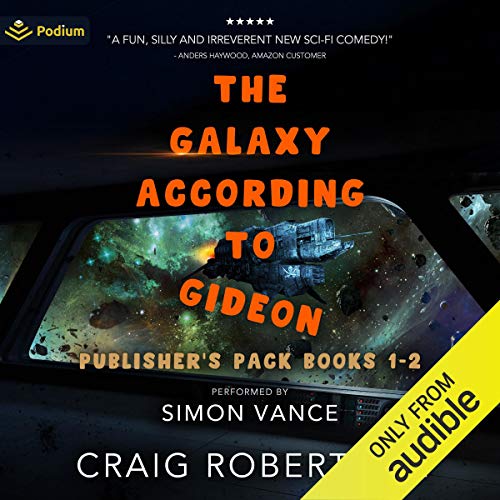 The Galaxy According to Gideon: Publisher's Pack

By: Craig Robertson
Narrated by: Simon Vance
Try for $0.00

Contains books 1 and 2 of the Road Trips in Space series.

The Galaxy According to Gideon (Book 1):

Gideon is that close to striking it rich - again. The flaw that always seems to trip him up is that he is a con man, a swindler, and a thief. The entire galaxy seems to have it in for the poor crook. Of course, his task of staying alive isn't made any easier since he has to bring along his ex-girlfriend, who has become a zombie. Then again, maybe dragging along Rigel, the universe's dullest man from the galaxy's most dangerous planets is even worse? You choose. Will Gideon ever catch a break?

The Earth According to Gideon (Book 2):

Gideon's at it again. That's never a good thing! This time out he is dragging Zebah and Rigel to Earth, that backward rock layered with smelly humans. His goal, as always, is to get rich quick without falling back on any legal tools to do so. Gideon, Gideon.

The only thing that's for certain when Gideon tries to scam us humans is that you will laugh. Oh yes. You will laugh....

What listeners say about The Galaxy According to Gideon: Publisher's Pack

Not sure what the point is....

Pointless. Plotless. Tedious. Even SImon Vance could not make it enjoyable. I kept hoping it would get better. It did not.

I nade it through the third chapter no more

oh my god what a horrid book. it was silly a jus th plain stupid.

quite enjoyable with a great narrator, its a space romp with no pretensions of science fiction just pure impossibility.

Reminded me of Hitchhiker's Guide but not quite as good. Still enjoyable and good for some laughs and snickers.

Loved the Ryanverse series. Just couldn't really get into this. Lacked something. Can't say what but it is.

A little confusing at times but good characters

the book can be a bit confusing and all over the place. but the characters were brilliant.

Not worth your time.

Having enjoyed the Ryanverse books I picked this up since I was in the mood for something light hearted. I tend to finish listening to all books I start but this was the hardest one so far. The first book of the two was somewhat amusing partially, but the second was pretty damn bad. Sure, there are a couple of good puns in there, but they are too few and too far in between top be worth your time.

The main character is an unsympathetic idiot, and you actually want him to fail because he's just that annoying. The story is uninspired and uninteresting, especially in the second book where everything just feels like a mish mash of ideas.

It's like someone tried to make fan fiction of HHGTTG, but without having any of the intelligence that makes that book series one of the greatest comedies ever written. It's only fun if it's stupid AND smart, these books have plenty of the former but very little of the latter.

Kudos to the narrator who does a good job with the material he's been handed, but good narration can't save a poor story.