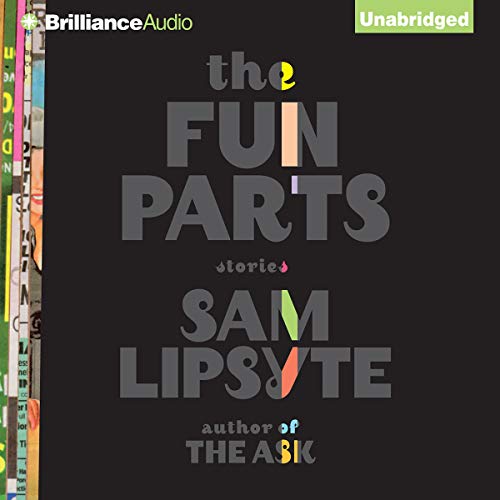 A writer Time magazine has said "everybody should read", Sam Lipsyte, author of the New York Times best-selling The Ask, offers up The Fun Parts, a book of bold, hilarious, and deeply felt fiction. A boy eats his way to self-discovery, while another must battle the reality-brandishing monster preying on his fantasy realm. In another story, an aerobics instructor, the daughter of a Holocaust survivor, makes the most shocking leap imaginable to save her soul. These are just a few of the tales, some first published in The New Yorker, The Paris Review, and Playboy, that unfold in Lipsyte’s richly imagined world.

Other stories feature a grizzled and possibly deranged male doula, a doomsday hustler about to face the multi-universal truth of "the real-ass jumbo", and a tawdry glimpse of the northern New Jersey high school shot-putting circuit, circa 1986. Combining both the tragicomic dazzle of his beloved novels and the compressed vitality of his classic debut collection, Venus Drive, The Fun Parts is Lipsyte at his best - an exploration of new voices and vistas in the form with which he began.

What listeners say about The Fun Parts

Reviews Raved - I Was Very Disappointed

I read numerous reviews of this book of short stories before I got it. They said it was urbane, witty, satirical, funny and imaginative. I gave up after the first two stories. Granted, I don't usually read short stories as I like to get more invested in the characters. The first story - especially the ending - made me say to myself "What the heck just happened?" and the second story about gamers had an ending that made little sense. I am sure there are others who may appreciate Lipsyte's style, but I am not a fan.