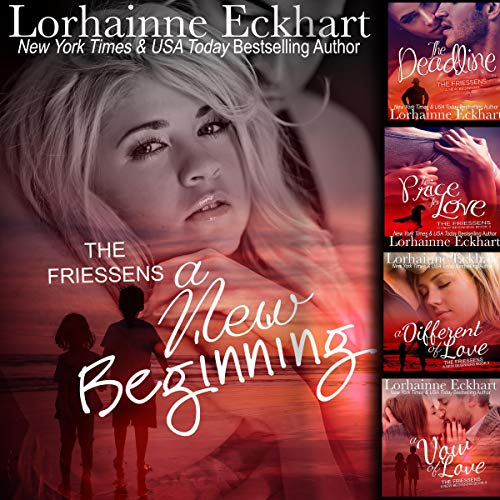 The Friessens: A New Beginning, The Collection

By: Lorhainne Eckhart
Narrated by: Valerie Gilbert
Try for $0.00

From New York Times and USA Today best-selling author Lorhainne Eckhart comes The Friessens: A New Beginning a big family romance series collection, which includes The Deadline, The Price to Love, A Different Kind of Love, and A Vow of Love.

In The Deadline, Andy Friessen has packed up everything and moved his family two states away, to Montana, to protect his wife, Laura, his newborn babies, and his stepson, Gabriel, from the threats of his mother. What Andy doesn’t know is that they’ll soon face a new threat, one he never saw coming.

Gabriel is sick, and a trip to the doctor confirms Laura and Andy’s worst nightmare: Without a lifesaving transplant, their son won’t survive.

What Andy doesn’t count on, as he tracks down the young man who fathered Gabriel, as well as Laura’s estranged parents, is that a whole host of problems are about to be unleashed.

The Price to Love

She could give him everything except the one thing he wanted - a child.

Candy knows that her husband wants a baby, but she can’t give him one. When Neil pays for a surrogate and moves her into their home, he tells her not to worry, but she suddenly feels as if she’s on the outside looking in.

Then, one day, she meets a little girl who steals her heart, a little girl with a damaged, scarred soul filled with the kind of despair and hopelessness that should never be in the innocent eyes of a child. But neither Neil nor his family understand her need to help.

As their marriage hangs on brink of disaster Candy is forced to make a choice between her husband and helping this child.

A Different Kind of Love brings back the couple that started it all: Brad and Emily. You fell in love with them in The Forgotten Child. Now, years later, they face an entirely new set of challenges with their preteen autistic boy when his mother, Crystal, returns. She wants a relationship with the boy she abandoned - something Brad and Emily never expected. She says she’s changed, but can the Friessens believe her?

A Vow of Love, A Friessen Family Christmas

Holidays are about family, love, and giving, but this Christmas, the Friessens are in for a rough holiday season.

Thirteen days before Christmas, a letter arrives that Candy Friessen was never meant to see. When she opens it, she discovers a lie that rocks her world, and she begins to question everything she and Neil have created together, including his love for her and their family.

Seven days before Christmas, her heart breaking, Candy considers leaving her husband for good, and she begins making plans - until a call one night alerts all the Friessens that Becky, their mother, is in the hospital, fighting for her life.

What listeners say about The Friessens: A New Beginning, The Collection

This audiobook provides 4 books of the Friessen...Andy and his cousins Brad and Neil and their wives and struggles.
The first is Andy and his younger wife of 12 years, her son she had at 15 on her own and their twins. Andy will do anything to protect his wife and children..he is controlling and overbearing..but always is loving to his wife and children...and during his story his cousin. I’ll and his wife Candy are introduced.
Neil is the person I have no respect for through out these 4 books. The only book he is redeemable is in the book involving his cousin Brad.
All these men are taught to protect and basically keep their wives in a bubble..but by far Neil is the worst.
My conflict comes by my inability to be drawn in and seeing what happens. I could not understand some of the submission of the wives, how stupid their husbands could be and yet it was almost like an accident, I couldn’t look away.
Never could I care for Neil..but Andy and Brad drew me in as did the wives and children in their lives.
So, I am irritated with myself but I have been sucked in and need to learn more about all the Friessen...I have a listen to one of the next generations books and loved him.
The narrator did an excellent job and kept my interest.
I received a free audiobook for an honest and voluntary review.

I really enjoyed this series! This book was full of drama and strong family bonds! The narration was great and kept me entertained! The author did a great job with the character builds and plot! This was my first book by this author but definitly not my last! I look forward to reading more books in this series! I was given this free review copy audiobook at my request and have voluntarily left this review.

Valerie Gilbert, was a brilliant narrator for this wonderful boxset

The family stories, feel so real. The family take care and look out for each other.
I cried and laughed.
You will be hooked. Honestly great characters and stories.