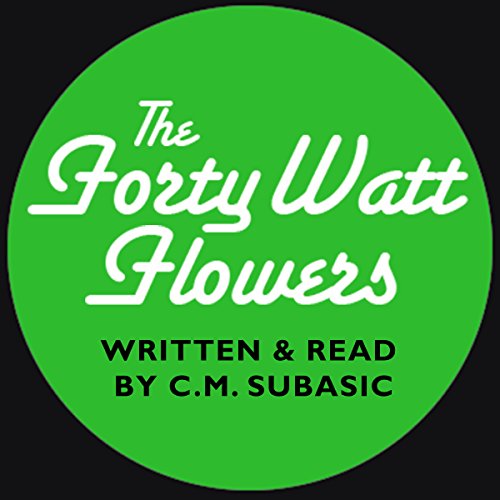 Living in the indie band capital of Athens, Georgia, Trisha decides to start her own punk band. Four young women are brought together, and The Forty Watt Flowers are formed.

Rosemarie, on keyboards, has a sex drive as fierce as a tornado. Aline, the singer, is a hermit, scratching out poems in her antebellum mansion. Juanita, on drums, has a poison tongue that's a little too quick on the draw. Toni, on guitar, made the mistake of heading south to come out of the closet.

In addition to managing her crew of misfits, Trisha struggles to figure out the chaos of her own life. Her relationship with Brent is caught in the roller coaster of his moods. She lost touch with her parents two years ago (and they probably still blame her for what happened to her sister).

The Forty Watt Flowers is a novel that gets you tapping your toes. It's what you create as you wrestle your demons, with the hottest, most frightening music you know.

What listeners say about The Forty Watt Flowers

A Band of Eclectic Characters!

Having lived in Georgia for the last 20+ years, it was very fun to read/listen to a story that was took place in Athens, GA. I was given the Audible version of this book in exchange for an honest review. The author was the narrator and she did a good job bringing the various personalities to life.

The book was a little hard for me to get into initially, but I’d say after the first 20% it had me hooked! The characters were all so well developed I felt like I really knew them by the end. It was interesting to learn about the real challenges of starting up a band and keeping everyone on the same page.

All in all this was a very enjoyable book which I am so glad I had the opportunity to read (listen).

Worth a listen to for people interested in music

I thought this was an interesting book about a group of girls starting their own band in a small town. I listened to the audio version, and the author did a good job of narrating, providing many different voices to the characters. I think this book would be particularly interesting to people who are starting their own bands, or who are just interested in music, especially of the 1990's. I was a teenager in the 1990's and knew all the music references that were made, which made it interesting. This book shows a lot about the dynamics of people in a band, troubles they may have working together, and having a life outside of a band. Overall, an interesting read. I probably wouldn't read it a second time, but I'm glad I read it once.

A Book that Glows from Within

What a romp! I loved this book when I read it and when I saw it came out as an audio book I decided to try the sample just to see what it was like. I liked it so much I decided to buy it and experience the book all over again in a different way--and I'm so glad I did. You won't be disappointed with this--you will only be disappointed when it's over as you'll miss all the characters as if they're family or close friends. Love the narrator. As good as they get. You can tell her heart is just about to explode for this book. Bravo!

Here is my original review of the book:

I don’t review a lot of books but felt this book deserved a review in praise and as a bit of an apology. I know you can’t apologize to a book, but that doesn’t mean I’m not going to give it a shot.

Loving all things Athens, Georgia I stumbled across this novel, which is set in my old college town. I thought it would be fun to read about spots where I’d hung out 20 years ago—a little nostalgia I guess you could say. Athens has held a sweet spot in my heart that just won’t let go of me. Thanks to REM, B-52’s, and others, the city even tugs on hearts who’ve never set foot within its limits.

Digging deeper I saw it was a book about a girl band and thought, “Oh God.” Nothing against girls or bands but for some reason I imagined Josie and the Pussycats. I decided to read 50 pages. And I’m glad I did.

Before long I was caught up in each of the girls’ unique lives, their struggles with each other, their battles with their pasts, and their motivations for moving forward to create music.

And talk about the music! I could hear it. I heard the awkward and tentative sounds the girls made in the beginning and I swear I could hear their sound evolving and growing. I don’t know anything about the author but I imagine she must have a musical background or at least a deep love for music and a record collection ten miles long. I felt Zen in the way the author talked about music in the passages. The music bounced around inside of me and I can still feel it.

But what I loved and appreciated more about this book than anything else was that I found at least one sentence on every page that gave me so much joy. Most books have a scattering of these, but this book is filled with them. They’re everywhere. I love sentences that make me smile and wish I’d written them myself. I found myself rereading sentences and phrases. I felt jealous at the author’s ability to put these beauties together with such ease. I can tell when an author is trying to be clever—and this isn’t that. It’s too soulful.

So, book: I’m sorry I judged you before I read you. I love you.

The music sceene in Athens, Georgia

I was offered a copy of this book in audio format from the author/narrator in exchange for an honest review.

This book narrates the formation of a women band in Athens, Georgia. The book also mentions musical events happened in this location. Trisha decides one day to form a band and find other four women interested in being part of it. They all have very different personalities and they will have to find the way to work together in a world lead by men.

I confess that it took me a third of the book to get into the story, and even after that I felt that I was missing something. It could have been my difficulty to connect to the characters since I expected more mature ones and we were presented with five twenty something women with their ideas not at all clear. There was in general too much drama going on, and despite the fact that I understand that there should be a lot of internal problems in a band, most of the stuff were teenage troubles.

Trisha was the only character that was somewhat developed, the other four women were quite plain, and I had issues understanding their motivations. It could be that we live in too different worlds and not the author's fault.

The book is read by Subasic herself and she did a good job in general, adding a lot of passion to the characters. One thing I was not convinced was the southern accent. It sounded like she was high.

For the rest I enjoyed the book and I find it interesting for anyone wanting to form a band, or interested in the music scene in Athens, Georgia.