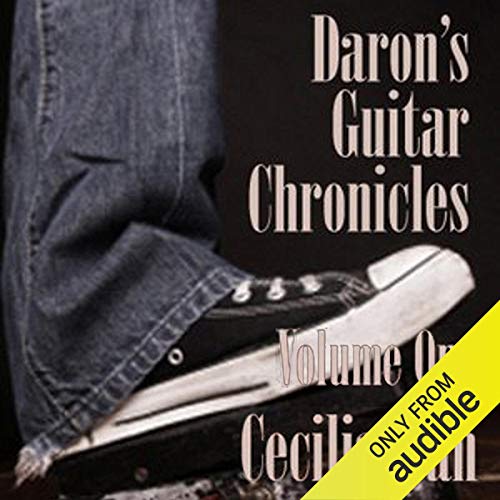 By: Cecilia Tan
Narrated by: Teddy Hamilton
Try for $0.00

Sex, drugs, and rock and roll. Coming out and coming of age in the days of AIDS, MTV, Reaganomics, and Just Say No.

Daron Marks is a young guitar player with a dream: to make it big like the guys he grew up idolizing in New Jersey - or at least escape his dysfunctional family. He makes it as far as music school in Rhode Island and the rock clubs of Boston beckon him. But it's hard to succeed from the closet.

The Start of A Relatable Journey...

I have had this book in my library for some time and just have now gotten around to reading it. Written and read like a journal, you are introduced to Daron and become privy to a subjective perspective of a ‘coming of realization’ in the 80s. Volume 1 provides the groundwork to understanding where Daron comes from and why he sees the world the way that he does. As someone who was the same age as our protagonist in the 80s, I can relate to the fear associated with the awakening and acceptance process. I look forward to the next volume and seeing where Daron goes from here… I enjoy Cecilia Tan’s writing style and Teddy Hamilton’s narration was spot-on. On to the next book…

Daron's Guitar Chronicles Volume 1 is the first in a series of stories about the life of Daron, a young nineteen year old musician growing up in the 1980's in the world of sex, drugs and rock'n'roll.

Check out the author, Cecilia Tan's video (on YouTube) which tells a little about how this series of books came into being.

I actually listened so the audio version of this book and quite enjoyed the narration by Teddy Hamilton. His voice and inflections really seemed to suit the story and the character of Daron.

The story itself is part of a larger journey, and this book only covers a small part of Daron's life. In this first book, we are introduced to Daron and his struggles to find his path in life. With dysfunctional parents who he no longer really sees or talks to, he is out making it on his own. He is trying to get his band up and running while earning enough money to fund his college course. He is also struggling with his sexuality and everything that goes along with discovering who he really is and what he wants.

A large part of the story is taken up with Daron accepting a roadie gig with the band of a friend of his father's. As he travels the country he meets some interesting people and has some interesting encounters - from a couple of sexual exploits with men to being actively pursued by a girl also on the tour.

This is not a romance, this is a character driven tale that introduces Daron - he is sweet and insecure and a bit confused - and tempts the reader into the next book of the series where Daron's journey continues.

This is a relatively short book, at least I think it is. I have the Kindle version but listened to the Audio version which is just over 4 hours long (the audio versions always take much longer for me as my reading speed is heaps faster than the narration). But as usual it was a great way to spend my commute to work over a couple of days!

Good but a little stagnant

Have you ever read a book that you know is good, but you just can't really get into it?

That's the feeling I had through the vast majority of listening to Daron's Guitar Chronicles, at least the first volume. I bought it because I absolutely love other audiobooks that I've heard Teddy Hamilton narrate, with his masculine, wry tone. And he delivered here; I'm not sure I would have made it through the book otherwise. And it's not because there's anything "bad" about it. On the contrary, it's very well written. However, almost nothing actually happens. It seems to be a very long setup for the second book in the trilogy, where I assume the plot will pick up a bit,

Ok, I shouldn't say "nothing actually happens," because quite a bit happens, really. Daron is a young man who dreams of being in a rock band, and has the talent to make it big. He has a current band, though he once played with a band that went on to become famous, but they dumped him when they hit the big time (he was too young). Now he goes on tour with them, comes to term (or more specifically, stubbornly fails to come to term) with his sexuality, then goes back to the conservatory where he's studying and tries to get his band going.

It seems like that's a good skeleton for an engaging plot, but something about it just fails to ignite. I think a lot of the fault lies with the main character, Daron, who just sort of meanders through the book, seemingly just letting things happen to him. He doesn't really appear to have much of an opinion about anything, and you get the feeling you're listening to a catalogue of events rather than getting in the character's head, like reading the thoughts of a particularly boring teenager forced to keep a journal for 11th grade English class. An example: Daron is attracted to men, as we learn quite early in the book, and he is specifically NOT attracted to women, which we also learn pretty quickly. He's so matter-of-fact about these two facts that I spent about 3/4 of the story thinking that ok, he's in the closet and not happy about his sexuality (it is the 80's after all) but he obviously can admit to himself that he's gay. After all he's been to gay bars, had sex with no less than three guys and jumped through hoops to avoid having sex with a girl, and he didn't seem to be in denial of anything. But no, apparently he hasn't actually put a label on it yet. And not in a new age "I hate labels and anyway sexuality is fluid" sort of way (thank god), but a good old-fashioned "I don't want to say the word" way. This is a perfectly acceptable plot point, but it would have helped in his characterization immensely if the reader had been made aware of this fact long before we were. It totally changed my mental image of the character, and I don't think it was deliberate, it felt more like just something he had forgotten to mention.

I don't mean to say that the prose itself is high school level--like I said, the book is quite well written. I'll most likely listen to the second and third books of the trilogy, which are longer and promise more plot development. And I'll listen to Teddy Hamilton narrate anything; he's just that good. But I think I might listen to something a little less dry before I tackle the second book.

It was ok. I really had a lot of issues with it. I’m not really sure if my problem with the book had something to do with the fact that I listen to the audio book. I wonder if it would be any different if I’d read it instead but I don’t really think so since I had not much problems with the narration itself. I liked the narrator’s voice. I did found a little difficult to difference between the characters but in general the flow of the story was good.

What I didn’t liked was the plot. It seem like hardly anything was going to happen. I was expecting a lot more in the romance area and I was left disappointed. I think the biggest issue I had was how difficult it was for me to connect with any of Daron’s emotions. He just wasn’t a sympathetic character, which was a little surprising considering his back story that I felt like I couldn’t really understand that well.

I guess I wanted so much more from the story and I just couldn’t get it. It might have something to do with the fact that is a part of a series because it really felt unfinished. It surely doesn’t work as a standalone. I’m not really sure if I’ll be reading the next instalments in the series, maybe some other time with a different state of mind and maybe reading it instead of listening to it, but that won’t be happening soon.

I ‘m left with a feeling of having lived a few days in the past with this character and his friends. It is very much a period piece, very evocative of that era when computer and cell phone are just beginning to have an impact on the music business and on the making of the music. I am left reflecting
on how some of Daron’s problems would be much different in present day. Recommended.

Yes, The characters are well written and the story is easy to follow.

The 1980's music references and the main character's relationship with his parents.

Have you listened to any of Teddy Hamilton’s other performances before? How does this one compare?

I don't believe I have listened to any of his other performances.

No, but thats not the book's fault. Its a very good book, but i had other things on my mind at the time so it took me a little while to get through it.

A Young Adult tale for adults. Follow Daron as his band becomes famous, he goes on tour, and falls in love with the band's lead singer, Ziggy...

Daron's Guitar Chronicle is like Almost Famous, except in this story the boy isn’t so innocent. Daron's coming of age means coming out of the closet. Not so easy when you are in the world of rock'n'roll and it’s the 80s.

Same review for all 3

I am sure these stories are pretty good...but I got bored with first story... not enough smexing for me... and I like smexing in my stories... not enough action either. I will go back one day and listen later...but right now...pretty bored...

Narration was just ok...nothing to rave about