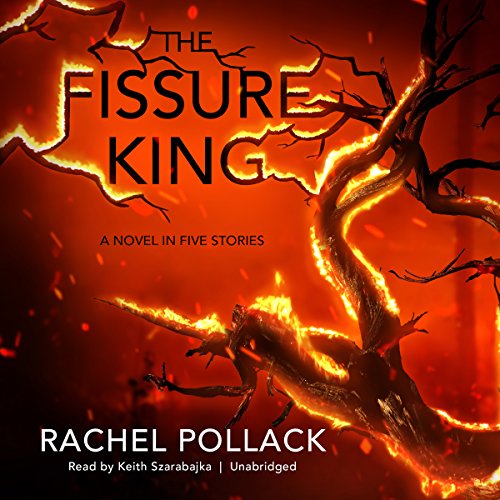 By: Rachel Pollack
Narrated by: Keith Szarabajka
Try for $0.00

In the classic noir tradition of Have Gun - Will Travel, Rachel Pollack - one of the world's foremost authorities on the Tarot - gives us the tale of Jack Shade, an occult shaman for hire.

Jack Shade has a secret, and this hidden part of his past sends him on a journey through time and space and a great number of metaphysical doorways. From the cozy poker table in the 11th-floor apartment of the Hôtel de Rêve Noire to the ethereal Forest of Souls to the faded houses along the Gold River, Jack flows in and out of this world. Even when his own duplicate hires him to kill himself, Jack is mercury in motion. Jack the Nimble, Jack the Quick.

Only Rachel Pollack, an award-winning novelist and comic book writer, could dream of someone as mischievous and mythopoeic as Jack Shade. The king is dead. Long live the king.

What listeners say about The Fissure King

I enjoyed these stories. The only thing I could do without is towards the end, where the writer wanted to make sure you knew the race of the main character and political standing.
I don’t read or listen to fiction for political or social justice themes to be pushed on me. I would of rated the story better if it didn’t take me out of it at the end.

Finally! Something besides another formulaic Harry Dresden knockoff. Don't get me wrong, I love the Dresden files but while this book similarly centers around a magical, problem-solving protagonist, it is more reminiscent of the sci-fi/fantasy I grew up reading. So well written and what a great concept. Jack Shade is an interesting character in an an interesting world full of magic. If you loved Nine Princes in Amber, then give the book a try. You will find yourself equally immersed in an intriguing story.

I really got into this book, man. I enjoyed it.

Fascinating, dark fantasy with new twists! Love this author and reader. Worth the credit for sure!

This was my first book by this author and I didn’t know what to expect. I loved the characters, the world and the suspense. Jack Shade’s story and backstory will stick with you. Thanks !

While the writing is good, the reader excellent, I had to stop listening at chapter 14. The main character never seemed to learn from serious past mistakes. Every episode was him having to clean up some mess he made that could kill him and/or others. Yet the audience is supposed to buy that he's super clever and competent. It finally got to be too much to swallow.

I've just finished this and am too in awe to write about it yet. I feel I'm vibrating like a tuning fork -- the book resonates for me.

The narrator's voice is a little challenging to get used to but after a while I got used to it. The story was engaging and very descriptive I thoroughly enjoyed listening to this.

It was ok.. I used it to pass the time on a treadmill. But had no problem shutting it off when the time was up.

Amazing story,Amazing narrator. Amazing Author. A must listen. I loved every minute of it.❤️