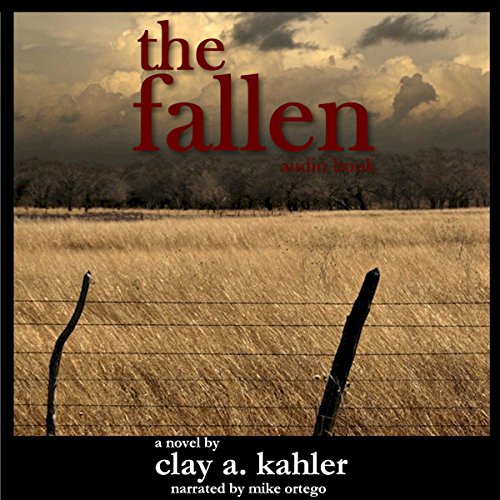 Forged in the hot West Texas wind, the Allen brothers grew up. Johnny and Coy had the same parents, same environment, and had the same advantages and disadvantages. Yet they would grow up to be so different. Coy, the younger Allen brother, grew up to be a successful Baptist Pastor; Johnny, a death row inmate.

With years of separation and a wall of bitterness and rage, can these two men come together? Can there be reconciliation? This is a story of murder, mystery, and redemption. Dr. Coy Allen is a preacher, an evangelist, a minister of the Gospel. But, there is one man that he had never even tried to reach. Now after years of silence, with his execution looming, Johnny Allen is asking to see his younger brother.

Can Pastor Coy Allen bring himself to forgive his older brother? Can he practice what he preaches?

What listeners say about The Fallen

This book touched me so deeply that words are not enough . I look forward to reading another book by Clay Kahler. Great Great book!!!!!

Would you consider the audio edition of The Fallen to be better than the print version?

No, they are different methods of "reading" the same book. They are pretty equal to me, it all depends on your needs. I like to listen while I work or do other things - this audio book allowed me to "read" and drive my car, or take care of my garden at the same time without ever losing my place in the book.

What does Mike Ortego bring to the story that you wouldn’t experience if you just read the book?

Mike Ortego has deep rich voice and accent. His reading feels more true to the story than my New England mind could have given.

So many places, but if I list them I would ruin the book for other people. There were many times though that my kids heard me yell at characters or speak out loud to the book...something I am not prone to do unless deeply involved in something.

I would not normally have read this book as it's not a genre I would normally have picked up. I am SOOOOO glad I did! This story captures you early on and then the twists and turns keep your attention throughout the text. The narrative descriptions of each character made me committed to their development and I truly fell in love with both of the main characters and their relationship with one another.

Captivated till the end.

What made the experience of listening to The Fallen the most enjoyable?

This story keeps you captivated while being reflective till the very end.

That there is HOPE for all.

Have you listened to any of Mike Ortego’s other performances before? How does this one compare?

First time- Mike Ortego has a gift ;his performance was outstanding.

There is HOPE for all.

This book is excellent. Couldn't stop listening to it. Lots of twists and turns to keep you guessing with a surprise at the end. Thoroughly enjoyed all the way through