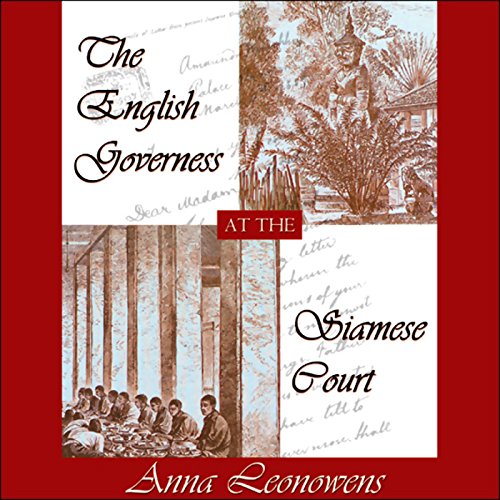 The English Governess at the Siamese Court

By: Anna Hariette Leonowens
Narrated by: Nadia May
Try for $0.00

This is the Victorian memoir that inspired Broadway's The King and I and the newest movie, Anna and the King, starring Jodie Foster.

The English Governess at the Siamese Court, written in 1870, vividly recounts the experiences of one Anna Harriette Leonowens as governess for the sixty-plus children of King Mongkut of Siam, and translator and scribe for the King himself. Bright, young, and energetic, Leonowens was well-suited to her role and her writings convey a heartfelt interest in the lives, legends, and languages of Siam's rich and poor.

She also tells of how she and the King often disagreed on matters domestic. After all, this was the first time King Mongkut had met a woman who dared to contradict him, and the governess found the very idea of male domination intolerable. Overworked and underpaid, Loenowens would eventually resign, but her exchanges with His Majesty, heated and otherwise, on topics like grammar, charity, slavery, politics, and religion add much to her diary's rich, cross-cultural spirit and its East-meets-West appeal.

"Recounts of and interactions with the royal family are delightful....May keeps her tone light and humorous" (AudioFile)

What listeners say about The English Governess at the Siamese Court

This book is virtually banned in Thailand. That is likely because it is an accurate and unflattering portrayal of the King and life as it was in the 1860's. The author was extremely observant of Thai culture and history. She was also very creative in her use of the English language. The book is a masterpiece.
This audio book was extremely well read by Nadia May.

excellent book. I enjoyed in depth details of Thai life of the past and a unique look at the Royal family