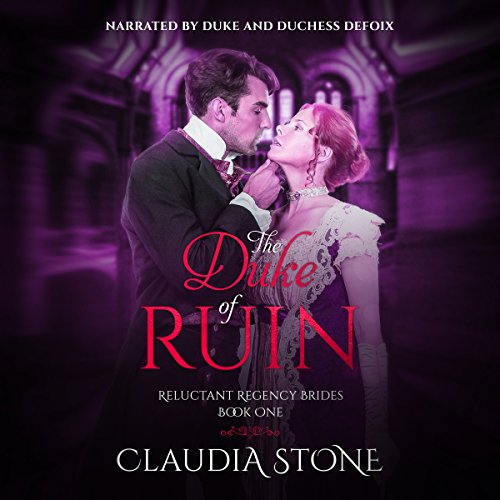 The Duke of Ruin

By: Claudia Stone
Narrated by: Duke and Duchess DeFoix
Try for $0.00

When Lord Greene wagers his daughter's hand in marriage in a card game, no one is less surprised the woman herself. The only thing that shocks Olive is that the man that he has gambled her away to is none other than the Duke of Ruin.

Rumors abound that the Sixth Duke of Everleigh callously murdered his late wife and killed her lover in a duel - and now Olive is to become his bride.

Ruan Ashford took one look at Olive Greene and knew that he had to have her in his bed. The beautiful, auburn-haired temptress will make a perfect Duchess; there's only one problem - his new wife despises him.

When a chance arises for Olive to disappear, she readily grabs hold of it, and soon, the Duke of Ruin is hunting the Cornish countryside for his runaway bride. When he finds her, can he convince her that he's not the dreadful villain the world thinks him to be and that his love for her is real?

What listeners say about The Duke of Ruin

I had to finish it before I went to bed!

Would you listen to The Duke of Ruin again? Why?

Really enjoyed this! This isn't my usual genre; I listened to the audio-book based on a friend's recommendation. My plan was to listen while walking...but as the story progressed, I couldn't wait until my next walk... so... I had to finish it before I went to bed!

Ruin. His character was well developed.

What does Duke and Duchess DeFoix bring to the story that you wouldn’t experience if you just read the book?

I thoroughly enjoyed the plot. I would have liked less passion and more friendship between Olive and Ruin.

I have enjoyed regency romances for a long time and thought this story was very well done. I loved the performance by Duke DeFoix immensely in this book and would love to listen to more of his works. Duchess DeFoix came across as too hoity and took away from the performance.
I liked how the author wrote a story that had some believable actions and events in the story. I loved how the Duke used the power of his title to have other's memory not be tarnished. His title should have been Duke of Redemption and not Ruin. Olive was a great character in this book too. I requested this review copy audiobook and have voluntarily written this review. I would listen to more books by this author and narrators.

The male narrator was a joy to listen to, but the breathless overdone female was grating on my last nerve before the end of the book. Rather than let the story carry its own weight, the narrators added special effects (echoes of the male narrator’s voice for the chorus of men in the bar is an example) as well as acting out the verbal effects of the story - throat clearing, coughs, laughs, etc. This insertion of the narrators yanked me out of the otherwise entertaining story more than once. One star deducted for getting in the way of the story rather than letting me lose myself. Pity as the range of voices was really good when the duchess narrator wasn’t over emoting.

This was a new author for me and I gulped the story down over several days’ commuting. As an avid historical romance reader, I’m all too aware there are rabid purists out there. So let me mention the story is heavy on improbable action, stuffed with anachronisms in both speech and actions, and packed to the gills with swashbuckling. The one sparsely described sex scene is quite literally climactic between a married couple on their wedding night and won’t shock your great aunt Agatha, so it’s a pretty clean read/listen. I’d give it a PG-13.

This audiobook is good old-fashioned fun. If you’ve ever stayed up late to watch a black and white Errol Flynn movie, you’ll love this. If you enjoy spunky heroines who stand up to their men, this is for you. If you enjoy improbable plot mechanisms and don’t care because it moves the story forward, plonk down a credit and prepare to be entertained. I pulled a star for going so over the top that I got a little exhausted as the listener and wanted the pacing to give me a few more breaks in places. It gets a little breakneck at times.

In short, I had a good time. If you’re ready to get your swash buckled, this is a fun way to do it.

“I was given this free review copy audiobook at my request and have voluntarily left this review."

Should be re-named The Duke of Triumph

What made the experience of listening to The Duke of Ruin the most enjoyable?

What a wonderful surprise! Two voices for the price of one. The verbal play between the two readers is playful, sexy and dramatic. Loved it.

What other book might you compare The Duke of Ruin to and why?

This is my second book in the genre, but the same voice, so it made it a pleasure once again to listen to.

Having two characters read the voices makes it so much more enjoyable to listen to. Looking forward tot he next one!

This was my first time listening to an audiobook, and I was thoroughly impressed and entertained! The Duke and Duchess DeFoix did such an incredible job bringing the characters to life with their narration, it felt almost like watching a movie. The chemistry between the two was playful and seductive. I ended up listening to the entire story in one day because it was so engrossing, and am really looking forward to the sequel! I am officially an audiobook fan now.

I was given a free copy of this audiobook in exchange for a review.

I can’t tell you enough how much I enjoyed this book . I was on the edge of my seat . It had me laughing at times , worried for some of the characters at times and had me wanting more . The next instalment can’t come soon enough . I have listened to many audio books and usually the people reading are very bland . Not with this ! They had me engaged from the very moment it started . I hope they will be reading for the next book in the series.

This was my first Claudia Stone's book. I love Regency Romance. This one is a great story, well written, suspenseful, funny and fast-paced, with a beautiful HEA ending. The storyline is very interesting, filled with twists and turns. I like Olive because she's strong and she does what she could to find her way in her life. I love the Duke! He's an alpha man, protective, caring and with a soft heart. The two main characters fit so well together. I'm looking forward for the next book in the Series (Jane's Story).

Duke and Duchess DeFoix did a great job with the narration. Olive's voice is really good, Duke's voice is really pleasant to listen to. I received this free review copy audiobook at my request and I have voluntarily left this review.

* Review revised after a second listen

Prim, proper and mysteriously seductive. This book's two narrators are wonderful and bring the story to life in a dynamic way. If you like British romance and intrigue you will love this book.

Duke Falls In Love and Fights For His Bride

I received a copy for an honest and voluntary review.

Olive Green (ha) has a father who has gambled away. all their money, until he wins enough when she is 23 for her to have a season. At this point because of her maturity and now distrust of men, since her father wasn’t to be counted on to support or protect her, so meeting the so called Duke of Ruin (ruen is his name) and he is alleged to have killed his first wife, she is really angry when her father gambles her hand away. Ruen had met her and knew he wanted her for his bride.
Well he didn’t go about getting her to be his bride in the best way and she didn’t react well.
So goes a merry chase, with attempts on lives and mysteries to uncover. Loved the story..love it when the man is so determined and falls faster and harder and doesn’t give up.
Loved the narrators with the accents and emotions and pacing, timing...perfect, except Olive was a bit too haughty most the time, that could have been dialed down a little, but didn’t ruin it!
Would love more books by this author and the dual narration by these narrators again.

If you can get passed the piercing voice.

The voice of the female narrator is grating to say the least. Everytime I wish to listen to the book, I find myself cringing at the idea of having to listen to that voice again. I just wish all books read by these two could be given to someone else, as the stories are not bad. The male no doubt thinks his voice is sexy, but the pair just make the words sound stupid. Every word is over emphasised, and made into a big drama.
The Hero is said to have murdered his first wife, so having met the heroine decides to marry her.
Her father loses her to hero over a card game.
The Heroine behaviour is not right for the time story occurs. So forgetting that fact, she manages to escape her husband.
The story was laid out at the beginning, she wanted to run, but want him to chase her.
She ends up in a house, where intelligent/spinster/unusual women live. As previously stated, written for a parallel universe.

Shouting is not narration

Female narrator is so persistently shrill that I gave up. Story as expected for the genre

I loved the narrator and thought she suited this type of book.
As for the book it was slightly different in that it had a mystery and I guessed who did it completely wrong!
Would highly recommend this series!

Story line good but sadly let down by female narrator! Her voice too loud and not enough tonality or softness. I would not buy another book she narrated.