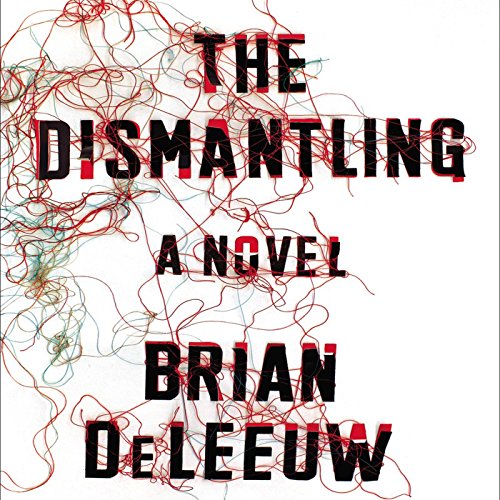 How much of yourself are you willing to sell?

Brian DeLeeuw hits that sweet spot between literary and commercial suspense with his brilliantly adept, ingeniously plotted novel - a chilling, fast-paced drama that urges listeners to question the meaning of atonement and whether revenge might sometimes be the only way we can liberate ourselves from our past.

Twenty-five-year-old med-school dropout Simon Worth is an organ broker, buying kidneys and livers from cash-strapped donors and selling them to recipients whose time on the waitlist is running out. When a seemingly straightforward liver transplant has an unexpectedly dangerous outcome, Simon finds himself on the run. In order to survive, he must put aside his better moral judgment and place his trust in a stranger who has a shocking secret.

"With its high tension plot and atmosphere of unease, The Dismantling is a morally ambiguous thriller in the grand tradition of Graham Greene and Patricia Highsmith. It has smart things to say about memory, redemption, and what it's like to live in a world where everything is for sale, but it says them by telling a gripping story." (Christopher Beha, author of Arts & Entertainments)

I'm writing this review because the previous raters left only a few stars no explanation. The Dismantling deserves a written review because is something of a chimera. I don't know if I would call it "genre straddling"-- it's more like a thriller with a touch of realistic horror written with the craft of a fluent, artful writer. I took a risk on this book and was surprised by how well worth the credit it turned out to be. I listened to it in a few sittings, propelled by the brisk story development, riveting action, and delightful narration performance by Robbie Daymond.

Fair warning, this book contains unflinching, graphic descriptions of medical procedures including an extensive blow by blow of a medical school cadaver dissection. These descriptions are not gratuitous, in fact, they add to the humanity of the struggles of the characters and provide symbolism for deterioration, exposure, and vulnerability in their lives and personal stories. The characters in this book are morally ambiguous, conflicted, and very real. Just as the vivid descriptions of violence, injury, and dissection may be too raw for some readers, so may be the behaviors and motivations of the characters. But if you can get past moral outrage, you will be rewarded with richly developed, complicated characters acting in an engrossing medical/ crime/ revenge thriller written by a skilled novelist and performed by an entertaining and talented narrator.

The greatest reward of this novel, for me, was I got to indulge my page-turning thriller thirst for something accessible and action-packed, but without sacrificing the art of something well-constructed and meaningful.

DeLeeuw needs to be discovered

The best thing about this book is that all of it was unexpected.
Based on the description, I thought I knew how the book would go, it didn't.
Based on the first chapter, I thought I knew how it would go, it didn't.
Based on 3/4 of the book, I thought I knew how it would end, it didn't.
But there also weren't shocking twists or disingenuous turns, just really, really smart writing that kept me on my toes and completely invested in everything that happened next.
I liked the book from the first few sentences. I was thrown in to the lives of the characters and was interested from the start.
I also loved the ending. I stopped and said "wait, what?" I was surprised that's how it ended, but it also seemed just right.
The character development was intense. The characters were all so perfectly flawed that they seemed like people I knew, they were very real.
The narration was great. Daymond's female voice may be the best on Audible.
DeLeeuw doesn't seem well known yet, I hope he is discovered. I will be watching for his next books.
I highly recommend this book.

If you could sum up The Dismantling in three words, what would they be?

I would sum up this novel using the words I use in the head line: "Dark, tense and modern". I would also call it a very pleasant surprise for those of us who enjoy action thrillers with a twist. I picked it up based on the review of one of the readers I follow in Audible (Marci from Portland) and was not disappointed. I got my action/crime fix and more...

This is a different type of thriller. Without really giving away much I can say that this novel's central character is a young medical school drop out involved in an organ dealing operation gone wrong. His latest clients figure prominently in the story. The two central characters are young and flawed and surprisingly believable in their unhappiness and moral ambiguity.

Have you listened to any of Robbie Daymond’s other performances before? How does this one compare?

I had never listened to a narration by Robbie Daymond. He was extremely appropriate for this particular novel and certainly added dimension to the characters. He manages to differentiate each character in subtle ways which are extremely effective. I was so impressed I was looking for other works narrated by him but he seems to do mostly children's books. I hope to hear him in other adult works. He actually "becomes" the central character and narrator in this novel.

This book engages the reader so that even if at times the reader may not particularly like what they are reading about, the reader will still want to know how everything is going to turn out...specially for the two central characters who are young and terribly misguided (both happen to loose their mothers early on in life...)

I look forward to other works by this author.

DeLeeuw has given us a beautifully-written, well-plotted, disturbing tale that leaves us a bit unsatisfied at the end. It tells the story of two young people who are dealing in opposite ways with the dark tragedies buried in their pasts. DeLeeuw keeps us intrigued by revealing these tragedies to us in small, measured doses throughout the narration, while simultaneously recounting the accidental intersecting and entangling of the protagonists’ lives. In a way, DeLeeuw almost succeeds too well with "The Dismantling", making us care about these characters so much that, at the end, we want to know what becomes of them … The story feels a bit truncated.

Narrator Robbie Daymond has a nice voice, and does a good job narrating this Shakespearian-style tragedy, distinguishing all the characters from one another clearly. I recommend "The Dismantling" to anyone looking for a well-written, well-narrated story, but not to people looking for light escape fiction or an action-packed thriller.

This kept my interest throughout the entire book.

I liked the narrator a lot. I thought the story was possible, even though far fetched. With such a need for organs, I feel sure there is a black market for several such events involved in the procurement of organs

A below average medical thriller

I wanted to like this book because the premise sounds so promising, but alas, this book is fairly lacklustre. I found the characters to be rather blasé and uninspiring, which in turn, makes the book boring and tiresome. Simon, the protagonist, is a med school drop out that continuously struggles with guilt over his sister's death. He accumulates a great deal of student debt, and opts to broker organs to pay off his loan and to make a bit of money. That’s all there is to it. Next, there is Maria, the young girl that sells her liver for a good amount of money, but her story is equally as mundane as Simon’s; her mother was an addict, then she goes into foster care, and then, shockingly, she needs a great deal of money to change her life around.

The liver transplant goes awry because of the poor choices of the recipient, and then Simon and Maria go on the run due the illegality of the organ transplant business coming to light. That sounds like it should be thrilling, but the characters are just so incredibly drab that it brings down the story line. The narration is great, though, so I did listen to the whole book, but overall I was not impressed.

Myopic and dull. I would not recommend. I ran out of patience for the boring story and the lame performance. Probably not his fault though.


Simon is in the business of locating and matching organ donors to organ recipients for Healthcare Solutions, a very for-profit and private Healthcare company. This novel has some great moments of suspense, and the storyline is original.

Narration was excellent and character consistent.

It is well written, well narrated, and hasn't received the recognition it deserves.

The reader does a good job breathing some excitement into this story but there isn't a lot to work with. A story of a sad dull man who makes some bad choices, who meets up with a sad dull woman.