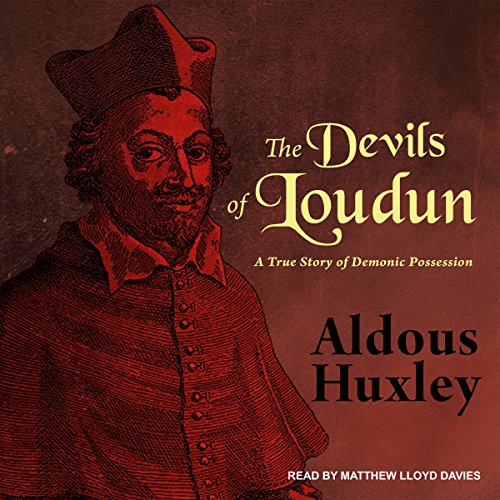 By: Aldous Huxley
Narrated by: Matthew Lloyd Davies
Try for $0.00

In 1632, an entire convent in the small French village of Loudun was apparently possessed by the devil. After a sensational and celebrated trial, the convent's charismatic priest Urban Grandier - accused of spiritually and sexually seducing the nuns in his charge - was convicted of being in league with Satan. Then he was burned at the stake for witchcraft. A remarkable true story of religious and sexual obsession, The Devils of Loudun is considered by many to be Brave New World author Aldous Huxley's nonfiction masterpiece.

What listeners say about The Devils of Loudun

Part of the book does a decent job of presenting an interesting historical event. The rest of the book is a rather windy and abstract discussion of obscure issues in theology, mysticism, abnormal psychology, metaphysics and similar matters. The final chapter explores “downward self-transcendence.” Enough said.

The book has frequent quotations in French and Latin that are not translated or paraphrased. In many cases, the quotes make a major point or conclusion, so the absence of a translation is a major detriment.

Would have been much better ...

... if frequent passages in French had been translated into English. The kindle version does just that and is a much more preferable way to enjoy this classic work.

Got to see the Ken Russell movie which was crazy, but needs to be watch. it is said Urban connffesion under torture. truly a man of God

Would you try another book from Aldous Huxley and/or Matthew Lloyd Davies?

The reading by Davies is fine (he does a pretty good job with French quotes, though he really doesn't need to say "Parree" instead of Paris). But Huxley's book is incredibly pompous, judgmental and unoriginal. Full of clichés. Alas, the poor man has not aged well.