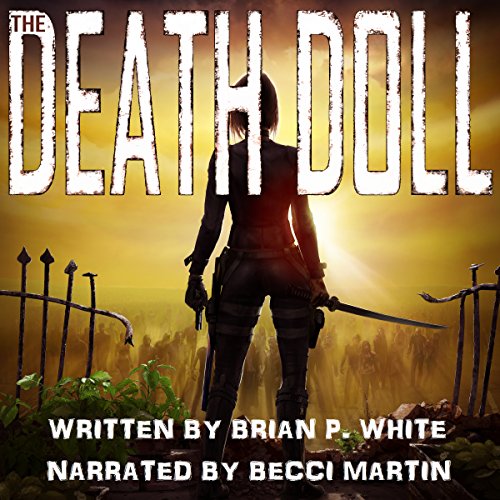 By: Brian P. White
Narrated by: Becci Martin
Free with a 30-day trial

Two years later, she's killing every flesh-eating corpse in her path to protect a group of unlikely survivors in northwest Iowa.

Unfortunately, she hides a terrifying secret that threatens every life she defends.

For nothing left on Earth that creeps or crawls is as lethal as The Death Doll.

What listeners say about The Death Doll

I was surprised to meet a zombie with a soul

Imagine my surprise when I started reading Brian White’s The Death Doll and discovered a zombie with a soul. Beyond that, I found a very well-thought-out and executed piece of apocalypse fiction. I was completely drawn into the much larger story White was creating, about faith and humanity and integrity. D.D. and Cody and their band of survivors have carved out a small piece of the world where humanity still exists. His characters are well rounded and complex and White does a nice job of leading us to discover his creations.

White has thought through the logistics of his band of survivors and provides enough descriptors for the camp to feel plausible and possible without making readers feel that he was explaining along the way. There were several things he handled in much the same way. The moral and faith-based underpinning of the novel was refreshingly easy to read as were his explanations of how the camp had managed to create energy, grow a food source, and ultimately, stay alive.

I enjoyed this book for a number of reasons, but it was the characters that kept me moving from one page to the next. The heroine, D.D., was a pleasant surprise and I enjoyed knowing her. This is fine apocalypse fiction that happens to have a side of zombiedom.

Becci Martin does an animated and articulate narration in the Audible version. Good work all around.

The characters are all well developed and realistic.  I enjoyed the storyline and while it had some of the typical trappings of an apocalyptic story, Brian White made it unique enough to make it difficult to stop listening!

Becci Martin, the narrator, performed an excellent reading of the book.  Her voice was smooth, she had the right tone for snarkiness and nailed Didi perfectly!  She brought … life to Didi.  I enjoyed listening to Martin, she was the right narrator for the book.

New to the zombie world- kate

This is my first experience with a “zombie” book and thanks to the author, it won’t be my last. I haven’t been so ready to read more about the main characters since I got hooked reading the Hunger Game series out loud with my teenage granddaughter.
Brian, the author, has presented believable characters that you get attached to and want to follow in a next book. The scenes are well done and keep you interested. I purchased a copy of the book to share with my granddaughter.
This is a great book for a rainy weekend or a long drive on Audible. Highly recommend. New author, can’t wait to read more of his stories.

A well thought out and executed zombie story...

If you are a fan of the zombie horror genre and like your stories with a bit of an edge and on the mysterious side, I think you will find listening to “The Death Doll” worth your time and credit. The book in many ways is similar to others I have listened too in the zombie category, yet the author weaves in some new and different concepts making the book feel fresh and different. This book reminded me of another we have reviewed titled “The Last Zombie Ocean” by Michael John Grist. It appears that this work is Brian P. White’s premiere release on Audible; at the time of this review. Let me say up front, based on his author’s page details, he should not have had time to write a book with all his family duties. Brian, thank you for your service to our country here in the United States by serving in the Army. The audiobook edition is narrated by Becci Martin who appears to be a newer narrator to Audible with only three books listed under her name. Even with a less mature combination of author and narrator, the book resonated with me and I found myself at polar extremes on the emotion scale. There was plenty of surprise, horror, friendship, and even romance all wrapped up in this title.

As with most books in this category, here was are also introduced to your stereotypical characters that fit well into the four classes of brains, brawn, beauty and bad guys. These should not be a surprise to people who frequent the horror or zombie genre. However, this story does add a few twists making the usual band of people come together when it is needed. The book’s characters must come face-to-face with many social issues we experience daily. There are problems with racism, sexism, and alienation because of one’s differences. This band of misfits needs to come together and ignore their differences to fight a bigger issue and ultimately survive. I liked that the author included both some light romance and the importance of friendships no matter one’s circumstances. We are also shown that decisions have consequences that not only affect the individual, but the group as well.

Along with bits of humor such as seeing zombies chase pigs to generate electricity, the author also adds some emotional turns that keep the listener wondering what will happen. We are given a number of action scenes as well as seeing the growth of this band of people as they banter between one another. Is there a traitor in their mists? This is part of the mystery the listener needs to uncover. Although I’m not a seasoned zombie aficionado, I liked some of the different zombie lore the author used to educate us on the subject.

What would I have changed? I felt the character development was overall well done and most of the characters felt dimensional. I would have liked to have had more detailed scenes or locations as the author mainly focused in on the immediate surroundings. I wanted to know more about the place they were living in, more about how things got the way they did, etc. A bit more color and background would have gone a longer way to make the book even better. Secondly, the book had more of a young adult feel to its writing style. Like with the scenes, I wanted a bit more depth and complexity to the writing structure. Knowing this was the author’s premiere Audible work, I look forward to future works as he continues to improve upon his writing skill.

Let me turn my attention to the book’s audio narration. I was not sure what to expect knowing that Becci Martin was a newcomer to Audible’s audiobook narration scene. While listening to the book, I felt the narrator was performed by a seasoned veteran rather than a person relatively new to narration. Her reading pace was consistent, I do not recall any issue around audio artifacts (swallows, page turns, background noise, etc.) while listening and volume level were maintained. I felt her voicing of the numerous characters was dependable and the accents did not bleed over to other characters (no zombie pun intended). If I had one suggestion relating to the book’s audio narration, I would say that her performance was more a literal reading of the text with little expression or emotion given to the words themselves. Narration can often enhance the story, and although it was not monotone, I would have like to have heard more expression in the narration.

For parents and younger readers, be aware this book contains a fair amount of vulgar language. In addition, there is quite a bit of mature and sexual topics covered both during general interactions and during periods of joking. I can say for a zombie book, there was less graphic violence than I would have suspected, yet there is some that may not be appropriate for less mature listeners. I would also say that the book contained a few anti-religious statements along with some poor theology, yet this is not the place one should be learning theology from in the first place.

In summary, the book was well thought out and its characters felt real to the story. The narration was good, but I would have liked the book to have been read with a bit more feeling or emotion, but this is a preference of the reviewer. There are many social areas the book addresses and it portrays the importance of friendship in times of hardship. If you can get past some of mature topics and language, there is a decent and enjoyable story to listen too. I’m sure we will see more released by this author.

Disclaimer: This book was provided to the reviewer by the author, publisher, or narrator at no charge in exchange for an honest review.