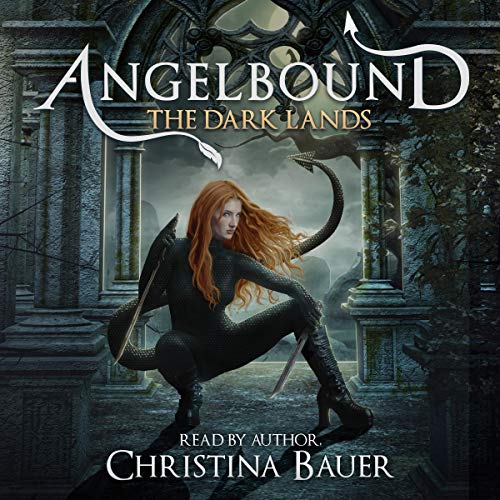 Nineteen-year-old Myla Lewis is loving life - she’s now a wife, mother, and Queen of the Thrax. Oh yeah, and being a super-powerful demigoddess who moves souls into Heaven or Hell doesn’t suck, either. In fact, everything is pretty much awesome. Until something craptastic happens.

Her honorary older brother, Walker, enters the Dark Lands, home to the rule-loving ghouls, and vanishes without a trace.

Now, it’s up to Myla to solve the mystery of Walker’s disappearance. Of course, Myla likes interacting with ghouls about as much as elective dental surgery. To make matters harder, everyone thinks that Walker is simply taking a well-deserved vacation. But Myla and her Angelbound love, Lincoln, both suspect that a new criminal called the Viper took Walker in order to release Lucifer, the ex-King of the Angels and bloodthirsty killer.

Long story short, Myla and Lincoln have only 24 hours to rescue their good friend and stop Lucifer from taking over the after-realms. Even for them, this may be a too-tall order, especially when Lucifer's mysterious past with Myla's father threatens the very future of the after-realms.

"This YA paranormal fantasy series is cute, compulsively readable and above all fun." (The Nocturnal Library Blog)

"I loved jumping back into the world of Angelbound." (Mean Who You Are Blog)

What listeners say about The Dark Lands

It's no secret that I am a huge fan of this author and this series. I totally love the dynamics and relationship these two share. They're a one of a kind couple. The balance they bring to whatever darkness they are trying to fight back is amazing.

This story shows a new level to their relationship. Myla and Lincoln have to balance being royalty, fighters and parents. Not to mention that their daily lives are full of utter craziness on a good day. So when Walker, Myla's honorary big bro and Linc's BFF goes missing after leaving Myla with a cryptic message... things get real, real fast.

The race is on to locate Walker, find out why the events of the book are happening and find a way to fix it all. Myla and Linc come into contact with a lot of 'new' people in this story. As things unfolded in the Dark Lands I was pulled further and further into the story. To say I had NO idea what was coming from page to page was amazing. With each new person, power and oddity they came across the level of "wtf" moments increased. There was more than once I blurted out "oh snap". I didn't see that coming!

NOW, on the funny side of things... can we just say that baby Maxon is freaking adorable!!! His little self gets into all kinds of messes and I love that his parents and grandparents are victims of his utter cuteness. Babies are messy, it’s just how they roll. To see little Maxon charm them as he smooches bananas into everything... I died. More than once. Let’s not mention the big, bad, archangel, aka, grandpa, trying to deal with diaper rash. Y'all, I spit my drink out everywhere while I howled in laughter. THAT WAS EPIC! I swear, I read and listened to that part more than once.

Whoooosa! I am so ready for the next installment into the Angelbound world. It's safe to say, if she writes it, I will read it. Period.

Narrator ruined the story. the story is simply written and nice for a super quick easy read but rather read it on my own.