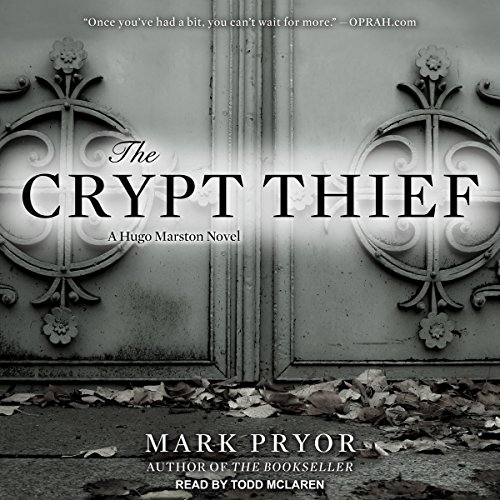 By: Mark Pryor
Narrated by: Todd McLaren
Try for $0.00

It's summer in Paris, and two tourists have been murdered in Père Lachaise cemetery in front of Jim Morrison's grave. The cemetery is locked down and put under surveillance, but the killer returns, flitting in and out like a ghost, and breaks into the crypt of a long-dead Moulin Rouge dancer. In a bizarre twist, he disappears under the cover of night with part of her skeleton.

One of the dead tourists is an American and the other is a woman linked to a suspected terrorist; so the US ambassador sends his best man and the embassy's head of security - Hugo Marston - to help the French police with their investigation.

When the thief breaks into another crypt at a different cemetery, stealing bones from a second famed dancer, Hugo is stumped. How does this killer operate unseen? And why is he stealing the bones of once-famous can-can girls?

Hugo cracks the secrets of the graveyards but soon realizes that old bones aren't all this killer wants...

"The clever antagonist leads [Marston] on a merry chase that will keep the reader entertained throughout." (RT Book Reviews)

What listeners say about The Crypt Thief

Hugo Marston is an exceptional investigator with a complicated past, as is his old friend Tom, and then there are Capitale Raul Garcia and reporter Claudia. They work kind of together to solve some really difficult but overlapping cases, including Tom's worsening alcoholism. The main thing is identifying and stopping a madman with a horrible agenda. Very well done!
Todd McLaren is the excellent narrator for this series.

As the saying goes in reality, things just don't work this way... Just about every police detail is wrong, from tactics to weapons to basic knowledge, it's off.

Suspense all the way

I loved the way I was kept in suspense all the way through.
I've listened for a 2nd time.