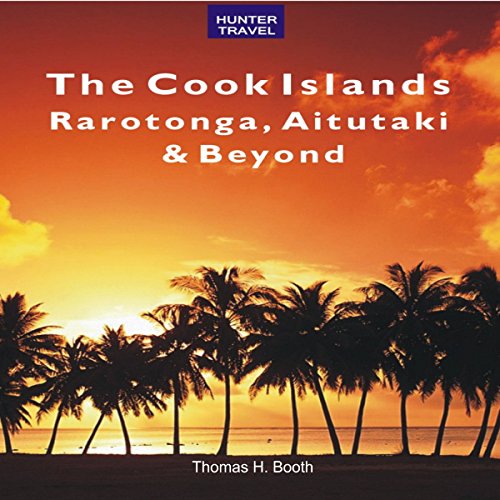 The Cook Islands: Rarotonga, Aitutaki & Beyond

By: Thomas Booth
Narrated by: Scott Servheen
Try for $0.00

The Cook Islands, named after the British Captain who seems to have been everywhere in the Pacific, are scattered like tiny jewels over a large stretch of sea between Tahiti and Samoa. Rarotonga, the principal island, is 2,500 miles due south of Honolulu - as far south of the equator as Honolulu is north of it - a similarity that provides both places with ideal climates. But that's as far as the similarity goes, for in spite of their recently built international airport, the Cooks remain off the beaten path. Even Avarua, the port, capital, and mecca to these 15 islands, is little concerned with tourists. Here there are no buildings taller than the highest palm, no traffic lights, and the people - who speak English with a New Zealand accent - are friendly and don't regard visitors as walking money. All amenities, all reasonable comforts are available, and everything seems to work. You can drink the water, eat the vegetables, be addressed in English, there's no tipping, and happily for Americans the US dollar goes a fairly long way. The natural beauty, particularly on Rarotonga with its forest-covered mountains, verdant coastal plain, and fringing reef, is profound. It'll take your breath away when first seen and some insist that Rarotonga is a miniature English-speaking Tahiti. The population of these islands comes to a mere 18,000. On some of them there are 50 people, on others 700, a few are uninhabited, and, until recently, another had a population of just one. On Rarotonga, the largest island, there are 9,300 people. This independent nation may be small in population, but it is large in area. Cook Islanders are Polynesians, handsome light brown Polynesians, who refer to themselves with pride as the original Maoris - the ones who made the ancient voyage of discovery to New Zealand. They are outgoing people, hospitable and warm, but not nearly as animated as their Tahitian cousins who speak the same language.

What listeners say about The Cook Islands: Rarotonga, Aitutaki & Beyond