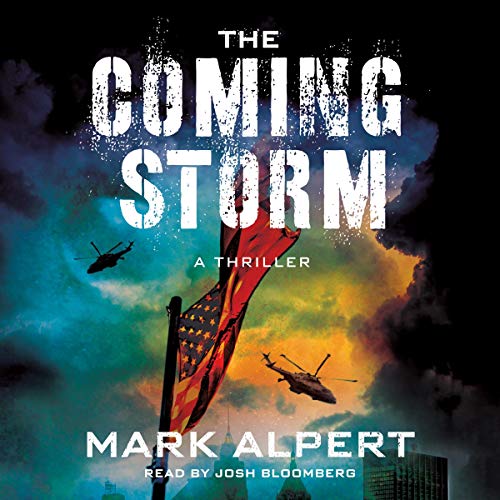 By: Mark Alpert
Narrated by: Josh Bloomberg
Try for $0.00

"This novel isn't just ripped from the headlines, it's an alarm bell ringing from the near-future, a prescient warning of where we're headed next. Read this now - before it's literally too late." (New York Times best-selling author James Rollins)

America is on the brink of collapse, devastated by a brutal government trying to silence its citizens, in The Coming Storm, the next action-packed thriller from Mark Alpert.

New York City, 2023: Rising seas and superstorms have ravaged the land. Food and electricity are scarce. A dangerous Washington regime has terrorized the city, forcing the most vulnerable and defenseless people into the flood-ravaged neighborhoods. The new laws are enforced by an army of genetically enhanced soldiers designed to be the fiercest and cruelest of killers.

Genetic scientist Dr. Jenna Khan knows too much about how these supersoldiers were engineered: by altering the DNA sequence in ways that could change the fabric of humanity.

Escaping arrest and on the run, Jenna joins forces with a genetically enhanced soldier gone rogue and a Brooklyn gang kingpin to resist the government’s plan to manipulate the DNA of all Americans. The race is on to stop the evil experiment before it spreads the genetic changes...and transforms the human species forever.

What listeners say about The Coming Storm

Tried hard to ignore the leaning of the political views but the story wasn’t enough to overcome the writers political views. Finished it thru skipping just to see how far the politics would go. Too far. Don’t waste your money.

Just when you're sure you know what's going to happen next, it doesn't. A nice thriller with an astute scientific underpinning. If you're paranoid about what's coming for the country, this won't help you sleep at night. The narration is spot on and no stupid music or sound effects. I highly recommend you give this author a try.

Could not finish this awful book

I felt sorry for the narrator. He must have really needed the work. This author has no respect for people that think differently from him. The constant use of racial slurs was appalling. Don't waste your money.

I was approved for an ARC of this way back when (thanks to Mike Hicks for showing me the book) but I just didn't have enough time to read the book.   Then I saw that it was definitively going to be released on audio and I decided to wait it out.  Release day came and I picked it up.  I rewarded myself with slotting it into my reviews so that I could read a book for me in January and I'm glad I did.

The Coming Storm is a perfectly timed book that can teach us so much... if we let it. I'm sure this book would not be for everyone.  Especially, once we finally meet the President in this world. We quickly find out who he is based on - that would definitely be a turn off for some.  Not for me though, I thought that the character that he created was correct, to be honest, it was almost too good.

But, I jumped ahead a bit there. When you go back to the beginning we are introduced to Jenna Khan, a brilliant scientist who is being taken by (we find out later) genetically modified federal soldiers. The world and character-building parts weren't slow-paced but were put right at the beginning so we aren't really into any major understandable action until a little way in.

The story, at its heart, I think is a political story.  It's also about a lot of other things including the morality of scientific discovery, testing, and it's about family and the lengths that we will go for them. I'm sure I'm missing some of the main story points but know that it is a scientific-based book that is full of action.

There were language and attitudes that area torn directly from the headlines of today. There was a lot of derogatory terms for non-white characters in this book and you can tell where a lot of it came from.  There isn't a wall per se, but there are many fences that are holding people where they currently are.  And none of this takes place in a southern town - but in NYC.

Another part that I liked that took a backseat to the rest of the things that Alpert was trying to accomplish was that everything was taking place in a post-storm ravaged city.  And the opening scene we're treated to what it's like to live in New York City during a superstorm.  And in an NYC that is flooding because of permanent irreversible climate change. I almost wish that Alpert would write another book to just describe the coastlines and what they went through when the climate finally turned against us.

Overall, The Coming Storm was one of those books that surprised me from beginning to end.  I wasn't expecting to read about super soldiers, CRISPR technology, a battle on the verge of a civil war, or the lengths that family will go to save family, but I'm glad to be surprised in a book like this.  On the outside it looks and sounds like a good thriller that will catch some peoples attention but on the inside, it's just the book I didn't realize I needed.