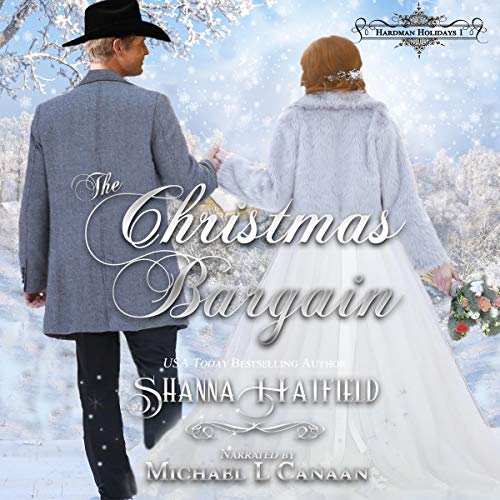 By: Shanna Hatfield
Narrated by: Michael L. Canaan
Try for $0.00

As owner and manager of the Hardman bank, Luke Granger is a man of responsibility and integrity in the small 1890s Eastern Oregon town. Calling in a long overdue loan, Luke finds himself reluctantly accepting a bargain in lieu of payment from the shiftless farmer who barters his daughter to settle his debt.

Philamena Booth is both mortified and relieved when her father sends her off with the banker as payment of his debt. Held captive on the farm by her father since the death of her mother more than a decade earlier, Philamena is grateful to leave. If only it had been someone other than the handsome and charismatic Luke Granger riding in to rescue her. Ready to uphold her end of the bargain as Luke's cook and housekeeper, Philamena is prepared for the hard work ahead. What she isn't prepared for is being forced to marry Luke as part of this crazy Christmas bargain.

What listeners say about The Christmas Bargain

Would you consider the audio edition of The Christmas Bargain to be better than the print version?

I loved the audio version of this book! I thought that the narrator really brought the characters to life and it was so neat how he was able to give a completely different voice to each of the characters.

Just as the story was written, Philly was my favorite. I loved "seeing" her blossom into a beautiful woman and it was very clear that her ability to come out of her shell was because of the safety, security and love of Luke. A good man will do that for a woman (not saying she necessarily "needs" that, but we're not going there for this review).

Which character – as performed by Michael L. Canaan – was your favorite?

My favorite character as performed by Mr. Canaan was definitely Luke. His smooth, deep voice really brought Luke Granger to life and enabled me to really get a sense that he was a true gentleman, something that is lacking in so many romance novels these days.

Love Overcomes All. Shanna Hatfield did a wonderful job writing this book and I enjoy completing the remainder of the series as soon as it is available! Thank the Lord for audio books, I just don't have time to sit down and actually read anymore!

I was reading through some of the other reviews and noticed one written by a particularly harsh critic who actually said she deducted a star because a dog died in this book. She also spoke very negatively of the narrator, citing his inability to do a female voice "at all" she said. I have to completely disagree with this. First, it's really quite silly to take off the rating because a fictional dog died. I can understand loving animals, but I've listened to books in the past where far worse have happened to humans, and I didn't deduct from the rating because of that. This was not a true story and if it were, it's not the authors fault that the dog died.

As for the narration job done by Mr. Michael Canaan, I can't for a moment fathom what it takes to do this sort of thing for a living. I have total respect for anyone who does narration and voice-over work. One of my all time favorites ever was the late Robin Williams. Have you ever noticed that even his female voices weren't believable? A man is simply not built to pass as a believable woman and a woman is not built to pass as a believable man! When these people read audio books for us, the goal is for them to do the best job that they can, so that we are able to distinguish whether it's a male or female character, and not be offensive or off-putting at the same time. You get someone like Mr. Canaan who has such a smooth deep voice, and to think that he's going to come out sounding like Julia Roberts is just absurd! I think that it's sad that this book's reviews have been negatively affected by this. I've listened to nearly a month of time collectively in audio books, so I feel like I have a really good idea of what a good narrator sounds like, and Mr. Canaan is an excellent storyteller and narrator!

I enjoyed this book very much, the narration is very good, thank you Shanna for another great book

This is my first book by this author and narrator and it will not be the last or the only one. I really enjoyed the story and the narrator.

I like the theme and the way way it is narrated made me be transported to the scene of actions. The narration voice is very smooth and soothing to the ear, that is what makes me focus on the theme and story of this book. I can't wait for the next one. I purchased the book on Tuesday, and on the fourth day I finished listening to it. I just had little time to listen to this great book, and now that I finished listening to it, I feel like my best friend is gone from my life. I really enjoyed listening to it. Thank you.

A love that kept giving

This a very warm & light hearted romance that draws you into the lives of two people from beginning to the end. A romance that started unexpectedly and blossomed into a very passionate and endearing love.

The story is an interesting tale of a woman being rescued from an abusive parent.

Luke and Filly made a likable couple because they started off as friends first and we were able to see the friendship developed into love.

I would have enjoyed the story more if Luke and Filly weren't so incredibly attractive. I really wish authors wrote about regular looking people.

I would also have liked to have seen Filly's friends and husband confront Melanie about her vileness towards Filly.

The story, although well written, lost a star because a dog suffered and died in this story.....


The narrator did a decent job with the male voices but wasn't able to do the female voices well at all.

Great story! Not so great narration.

Narrator was painful to listen to but I have read this series and loved it. Female voices are horrendous.

The story was awesome. It makes you feel good. You don't want the story to stop.
The voice and accents were all wrong for the characters. Hard to hear and understand at times. We would turn the sound up and go back to try to understand what was said. I finished the book because I wanted to find out how it finely ended but won't listen again. I have heard the reader in other male character based books and he was awesome. But his voice and accents destroyers this book.

I really enjoyed listening to this book. I found the story refreshing and, while the premise was not new, the way Ms. Hatfield handled was anything but stale. I also found the narrator to be very talented. His different voices for different characters were nothing short of genius, the best I have heard in all the audiobooks I have listened to. I would highly recommend it to anyone looking for a good, clean, old fashioned romance.

This would’ve made a better read than listen. It’s a cute story but the narration was all wrong. Not wrong in a technical way but just not the right voice for these characters. The way he did the female voices was grating and the female giggles were particularly ridiculous.

I very much enjoyed this story from beginning to end with a few laughs along the way. Something sugar sweet after all those murder mysteries I usually go for. A real bargain.