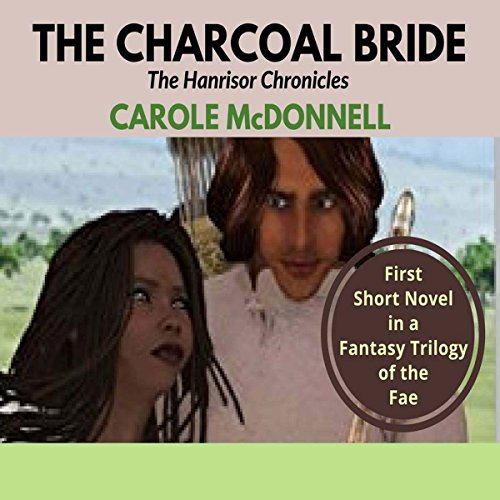 By: Carole McDonnell
Narrated by: Vanessa Padla
Try for $0.00

The Charcoal Bride is the first of a trilogy of short novels called the Hanrisor Chronicles. The trilogy chronicles the rise to power of Hanrisor’s King Skall and the family curse - called the Hanrisor legacy - that troubled him and his descendants.

An oath is not easily broken, and an oath made to the god of vengeance is even more difficult to break. Thus, Hanrisor - and Soghan, Skall's place of birth - are two of many nations in the Malku universe who endured war. Although the fae and human rarely war, there have been times when war rose up between them, and the vow made by Prince Arvid was the cause of a family curse that affected his family for generations. King Skall rose to power because of such a war, and his story echoes throughout the legends and myths of Hanrisor and other nations of Malku.

This novella tells of Prince Arvid, Skall’s father, and his ill-fated marriage to Sellah, his charcoal bride. The second part of the trilogy, Sea-Walker, will relate how Skall traveled his new kingdom after he had inherited. The third part of the trilogy, How Skall Dragon-rider Won His Three Wives, depicts the heritage - good and bad - which Skall and his descendants inherited through the curse that Prince Arvid placed upon himself.

Throughout the annals, the long-lived fae appear because of their effect on Malku history, society, and culture. The merfolk also appear, although their lifespan is similar to humans. As in all the novels of the faes of Malku, the fae, merfolk, and humans live together. The fae clan consists of water-faes, air-faes, and land faes. The human clans are equally varied with humans from all races, class, religions, and status. In some regions, there is harmony among these separate clans. In other regions, there are hurdles, prejudices, and social complications.

What listeners say about The Charcoal Bride

This was a beautiful fantasy tale written by Carole McDonnell. I was very impressed with the thoughtfulness of the storytelling, and I thought it was beautifully written and also liked the narration. I loved this story! It'll take you on a very special journey, and I loved every minute of it :) I'll definitely be reading the next two stories when available, and I'd recommend this book wholeheartedly :) :)
I was given this free review copy audiobook at my request and have voluntarily left this review.

started out okay but

It got a bit drawn out. The narrator read in such a monotone that is made it difficult to pay attention.

This book was an ok fantasy story but was really slow. For a novella, that's not good. The narration was kind of slow and "sleepy" and really made things drag. It wasn't that her voice was bad, it was just kind of boring for me. I think the only reason I finished it was that it was only 3 hours long.