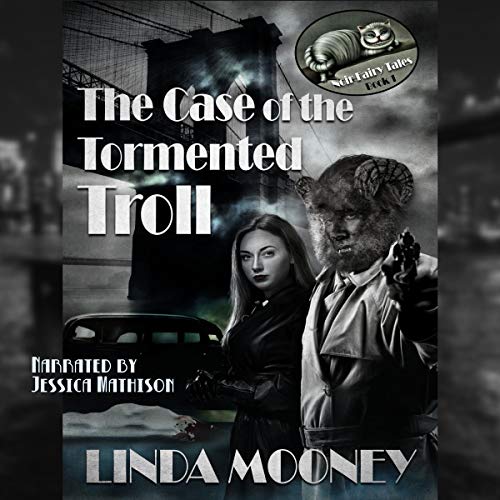 The Case of the Tormented Troll

By: Linda Mooney
Narrated by: Jessica Mathison
Try for $0.00

The 1940s. Life in Grimm City can be just as fabulous as it is dangerous. But it's not a place that can be found on any map. Welcome to a world of gun-toting, hard-drinking, cigarette-smoking fairies, elves, dwarfs, shifters, and witches, as well as human beings.

Beldon Chase and Aura Dagger, of Chase and Dagger Detective Agency, are hired by Estin Ragg, a troll whose brother, Durif, was discovered dead under the 82nd Street Bridge. The coroner calls it a suicide, but Estin swears it was murder. The cops seem to be sitting on their hands because he’s a troll, and everyone knows how much trolls are castigated and despised in the realm.

Aura and Beldon are partners. He’s an ex-cop who was framed for something he didn’t do and kicked off the force. Soon after hanging out the shingle of his detective agency, he found Aura homeless in the streets after the death of her father. Something about the young woman touched him deep inside, and he took her in and trained her in how to be a gumshoe.

They’re in love with each other, but it’s Beldon who’s put the skids on their relationship from becoming anything more than professional. Mostly because he's a Static, a man-beast unable to convert completely into a man or an animal.

As Bel and Aura are digging through clues as to whether or not someone killed Durif Ragg, their relationship comes to a head. Aura wants a commitment from Beldon. He would do anything to give it to her, but his own insecurities are holding him back.

Things eventually reach a breaking point when they discover who is actually behind Ragg’s death, and why. Which culminates in Aura giving Beldon a choice — either they make this a permanent partnership in all ways, or she takes a hike, leaving him and the detective agency.

What listeners say about The Case of the Tormented Troll

This is part of a 3 book series but each is a stand alone. Think Beauty And The Beast with a co-worker romance twist. The main characters work as PI's, one is a trainee and the other is her partner whom happens to be a troll (literally). They should never be together but sometimes things happen and magic can make the impossible, possible.
If you like old PI noir, UF and PNR stories, I'd recommend this little ditty. Its a quick listen/read and well written.

I've always liked both Fantasy for the extra races and Noir for the plot twist elements.

This is a fine story, well told and well performed. As an example of one character, the morgue attendant is an elf, not happy with the visit by the private investigators.