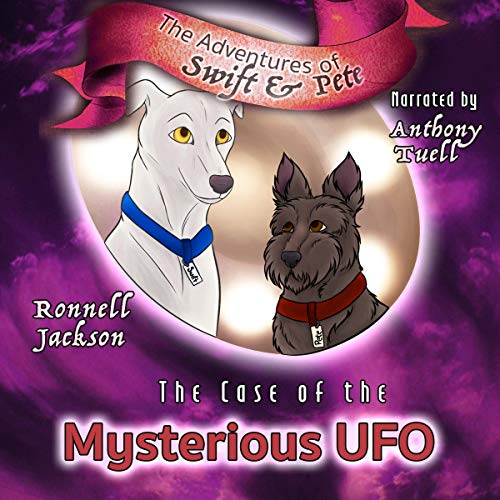 The Case of the Mysterious UFO

By: Ronnell Jackson
Narrated by: Anthony Tuell
Try for $0.00

Mahmah adopted Swift when she visited the local animal shelter; the greyhound caught her eye, sad and lonely in his kennel. She took him home, cleaned him up, and taught him what it was like to live as a beloved family companion. A year later a skinny, matted Scottish terrier named Pete landed on their doorstep, and soon their little family had expanded to three.

What Mahmah had no way of knowing was that Swift and Pete had once lived as strays together, running the streets and scrounging to survive. They'd been close friends and partners in crime, until circumstances - and Animal Control - separated them.

Now trouble awaited the duo once more, as they slipped under their fence and into the dark of night. Swift and Pete raced through the neighboring woods in search of adventure, laughing and remembering the old days. Suddenly a bright ball of light appeared in the sky, streaking toward them and growing brighter and larger before lowering into the dense growth ahead.

They slowed to a stop.

What was that, a meteor? Some kind of aircraft? As the dogs and their friend Icebox investigate The Case of the Mysterious UFO, truths about the mistreatment of animals on our planet and the disappearance of their fellow canines come to light, and their world will never be the same.

The Adventures of Swift and Pete make perfect early chapter listens for ages nine and up, and can easily fit into school and humane education programs, too.

What listeners say about The Case of the Mysterious UFO