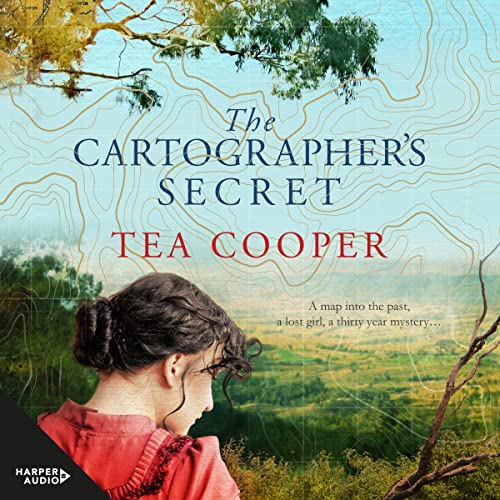 By: Tea Cooper
Narrated by: Casey Withoos
Try for $0.00

A young woman's quest to heal a family rift entangles her in one of Australia's greatest historical puzzles when an intricately illustrated map offers a clue to the fate of a long-lost girl. A mesmerizing historical mystery set in the Hunter Valley from best-selling author Tea Cooper for fans of Natasha Lester and Kate Morton.

Evie Ludgrove loves to map the landscape around her home - hardly surprising, since she grew up in the shadow of her father's obsession with the great Australian explorer Dr. Ludwig Leichhardt. So when an advertisement appears in The Bulletin magazine offering a one-thousand-pound reward for proof of where Leichhardt met his fate, Evie is determined to figure it out - after all, there are clues in her father's papers and in the archives of the Royal Geographical Society. But when Evie sets out to prove her theory, she vanishes without a trace, leaving behind a mystery that taints everyone's lives for 30 years.

When Letitia Rawlings arrives at the family estate in her Model T Ford, her purpose is to inform her great-aunt Olivia of a bereavement. But Letitia is also escaping her own problems - her brother's sudden death, her mother's scheming, and her own dissatisfaction with the life planned out for her. So when Letitia discovers a beautifully illustrated map that might hold a clue to the fate of her missing aunt, Evie Ludgrove, her curiosity is aroused and she sets out to discover the truth of Evie's disappearance.

But all is not as it seems at Yellow Rock estate, and as events unfold, Letitia begins to realize that solving the mystery of her family's past could offer as much peril as redemption.

What listeners say about The Cartographer's Secret

I couldn't finish this. Inane detail on unimportant things, no clear indication of who is who or where you are at any given time, no following up hinted details... I got frustrated at this wandering tale.

Another Triumph by Tea Cooper

I just love Tea’s books, the history is mixed perfectly with the fiction, and this is a tale that dragged me in so that I sat up late listening when I should have long been in bed. The only thing I found a bit off putting was the narrator pronouncing local town incorrectly. But it wasn’t so bad as to mess with my enjoyment of the story.

You'd think that in using an Australian for the narration she would have the manners to learn how to pronounce places in said book.
For those of you not from the Hunter Valley , it is pronounced Scone as in Stone not Scon as in John. Apart from that continual irritant a very enjoyable graphic book.

Really enjoyed this book. The narrator does an amazing job of making each character stand apart and come alive! So happy to have found another great Australian author. Beautiful style of writing. Now I feel like a trip to Wollombi to walk in the footsteps of these characters.

I thoroughly enjoyed listening to this book. Very exciting and interesting story with lovely imagination intertwined with some factual characters. Romantic insights into the past..

Loved this story. i could tell it was a mixture of fact and fiction intertwinned to make a brilliant work of art.

I have a friend in Sydney who is an English teacher. Occasionally I send him a book that I think is outstanding. This is one of those books!

Did not want this book to finish 👏👏👏
I’m hoping there will be a sequel to follow.

This was one of the few books I listened to right through. I really enjoyed following along with Letitia as she learns about Evie and sets out to discover her fate. It was a really well researched fiction based on some historical events/locations even if some places were mis-pronounced but that aside I really enjoyed this book and would recommend it to anyone who likes this genre

Enjoyable story. Narrator did a fine job until the last part where main character was screeching a little too much. Disappointing element to an otherwise enjoyable listen.