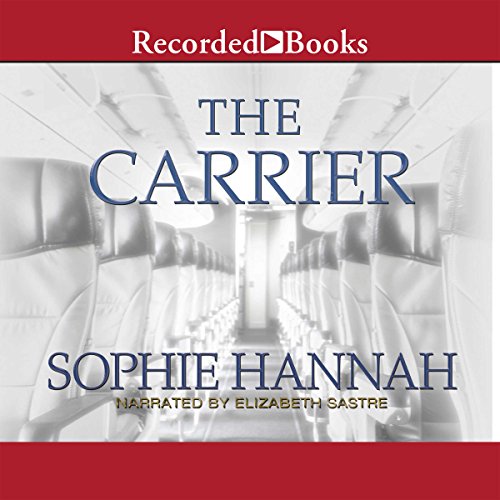 An edge-of-your-seat novel from the phenomenal Sophie Hannah.

When her plane is delayed overnight, Gaby Struthers finds herself forced to share a hotel room with a stranger: a terrified young woman named Lauren Cookson - but why is she scared of Gaby in particular?

Lauren won't explain. Instead, she blurts out something about an innocent man going to prison for a murder he didn't commit, and Gaby soon suspects that Lauren's presence on her flight can't be a coincidence. Because the murder victim is Francine Breary, the wife of the only man Gaby has ever truly loved. Tim Breary has confessed, and even provided the police with evidence. The only thing he hasn't given them is a motive. He claims to have no idea why he murdered his wife....

What listeners say about The Carrier

The plot here was ridiculous, as Hannah's plots are getting to be. The Spilling police are becoming more of a joke than ever. Actually, this was almost a stand-alone book since the cops had so little to do with it. Liv and Briggs are still in their unlikely involvement, while Simon and Charlie's marriage is as inexplicable as ever. Yet I found this a thoroughly enjoyable book for some reason. Hannah just has that gift of creating interesting characters and putting them in situations where you are compelled to find out what happens. Maybe it is because it's all so absurd, but a Sophie Hannah "thriller" (hah) really is always worth reading.

Well, It Helped My Insomnia...

What disappointed you about The Carrier?

Everything except the narrator. The story had great promise, but after the first "scene," it was just mind-numbingly boring.

What was most disappointing about Sophie Hannah’s story?

I read the first few pages in a bookstore, and the opening was so compelling, but after that first scene in the airport, everything else was torture to get through. It's one thing if an author just can't write, but this was a particular betrayal as the remainder of the novel had none of the tone of the opening...Bait and Switch, anyone?

The scene in the airport was fantastic! Truly. This was my first glance at a Sophie Hannah novel, and I was sold... unfortunately. I immediately felt like I knew the characters; I was invested in the situation; everything was there. Do yourself a favor, though; just read that scene. The rest of the book is boring, and the characters become far less engaging.

Betrayal at how such a stellar beginning became such a boring book.

I mentioned earlier that this was my first glance at a Sophie Hannah novel: It will be my last. I'm not trusting this author to maintain quality throughout an entire novel.

The narrator, however, was excellent. I'm searching out more of her work. I'd probably have given her 5 stars if I'd have been able to care about what she was reading.

All over the place

So many minor characters. Unrealistic relationships between lovers, friends, marriage and even enemies. Just unbelievable characters. All whining and just don’t think normally. I started not to care about any character.

Good story too much of the F word

I’ve listen to her stories where she’s picked up the gauntlet from Agatha Christie I thought she was a good writer. And Sophie is a good writer. However, the excessive use of the F word was really hard to listen to. When reading a book you can skip over it and it’s not in your face or rather your ears. It would be great if we had an option to remove the curse words from a book.

The best Sohie Hannah novel yet!

Loved the humor Elizabeth Sastre added to this brilliant mystery. Didn't want it to end.

Narrator was fantastic, one of my favorite audible performance ever. Typical Sophie Hannah story, rich, layered and literary.

I love this author! Usually her stories are full of twists and turns and many many characters. This time, she has slowed things down a bit. It makes for a slow burn, suspenseful and very clever dialogue. There is a lot of humor too. Very enjoyable!

Edge-of-your-seat just waiting for THE END!

Someone who wants to be bored or put to sleep.

Has The Carrier turned you off from other books in this genre?

No, but I will not waste my time and my credit with another book by this author..

Who would you have cast as narrator instead of Elizabeth Sastre?

I don't think any narrator could have made this audiobook a wise choice.

Anger I wasted my time and credit. Sadness that some people apparently liked the book. Disappointment in the reviewers that misled me that this was a 3.7 rated audiobook.

I love a good mystery, thrillers and suspense audiobooks. I love especially perfectly narrated audiobooks. This is NOT one of them, not even close. Please do yourself a favor and skip this one.

I usually love Sophie Hannah's books but this one was so boring! I found myself wishing it would end.