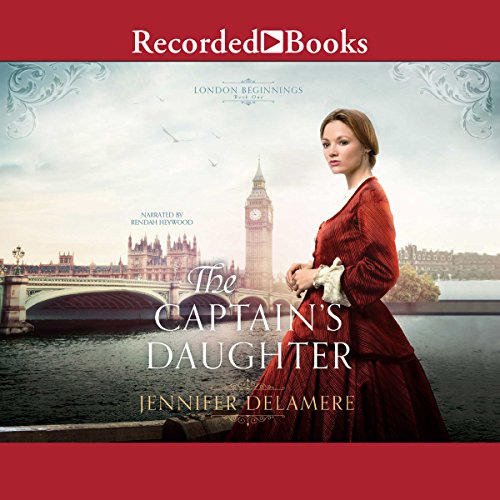 By: Jennifer Delamere
Narrated by: Rendah Heywood
Try for $0.00

When unfortunate circumstances leave Rosalyn Bernay penniless in 1880s London, she takes a job backstage at a theater and finds herself dreaming of a career in the spotlight. Injured soldier Nate Moran is also working behind the scenes, but he can't wait to return to his regiment in India until he meets Rosalyn.

When a series of circumstances beyond her control leave Rosalyn Bernay alone and penniless in London, she chances upon a job backstage at a theater that is presenting the most popular show in London. A talented musician and singer, she feels immediately at home and soon becomes enthralled with the idea of pursuing a career on the stage.

A hand injury during a skirmish in India has forced Nate Moran out of the army until he recovers. Filling his time at a stable of horses for hire in London, he has also spent the past two months working nights as a stagehand, filling in for his injured brother. Although he's glad he can help his family through a tough time, he is counting the days until he can rejoin his regiment. London holds bitter memories for him that he is anxious to escape. But then he meets the beautiful woman who has found a new lease on life in the very place Nate can't wait to leave behind.

What listeners say about The Captain's Daughter

Fun Behind the Stage and Fun With Family

I really enjoyed this story! It's not a deep, heavy tale but just the right amount of fun. There are a few concerning things like why Rosalyn flees her employer, a troublesome encounter in London, and a rogue actor. There is also why Nate is so determined to return to the army. The theme of God's provision at just the right time is woven into the fabric of the characters lives so naturally, I found it to be a great reminder.
I thought the behind the scenes of theater life was very interesting and fun most of the time.
The family relationships are perfectly portrayed here. I loved the Moran family!
Highly recommend this!

slow burn. nothing really exciting until the end. even then not a real mind binder

This is the first time I have read (or I should say "listened to" a book by this author...and it definitely won't be the last! It's a sweet and tender love story with believable characters and a touch of mystery. I also really liked the thread of charity and God's goodness woven through out the story. And a bonus was the narrator! She is wonderful!