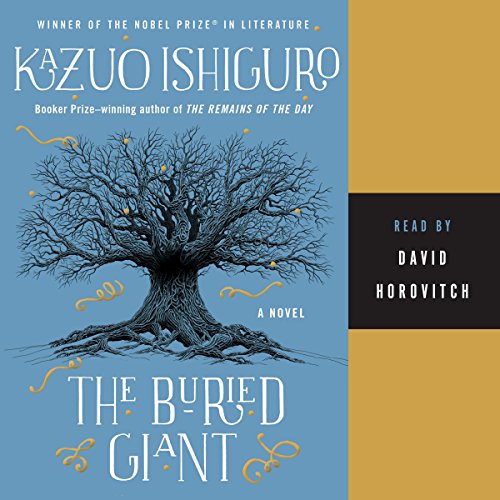 By: Kazuo Ishiguro
Narrated by: David Horovitch
Try for $0.00

The Romans have long since departed, and Britain is steadily declining into ruin. But at least the wars that once ravaged the country have ceased.

The Buried Giant begins as a couple, Axl and Beatrice, set off across a troubled land of mist and rain in the hope of finding a son they have not seen for years. They expect to face many hazards - some strange and otherworldly - but they cannot yet foresee how their journey will reveal to them dark and forgotten corners of their love for one another.

Shortlisted for the 2016 British Book Industry Award for Fiction

Longlisted for the 2015 Kirkus Prize

"[Ishiguro is] perhaps not as prolific as his peers, but always on top of his game.... [ The Buried Giant] gives us one of his most stirring stories yet.... The story takes place about a thousand years ago, but the reflections on 'lost memories, love, revenge and war' are all too touchingly familiar." (Carli Whitwell, HELLO! Canada)

"It's striking to find a novel that makes us feel ambivalent about the removal of a dictator, and about the very process of uncovering information about its characters - something all novels do. And where The Buried Giant truly moves Ishiguro into new territory isn't so much in its fantasy elements - which are downplayed - but in a wider sweep...[to] explore the role of shared memories." (Mike Doherty, Maclean's)

What listeners say about The Buried Giant

A masterful writer coupled with a masterful reader. The story is poignant; allegorical without swerving into pedantry. Bravo!