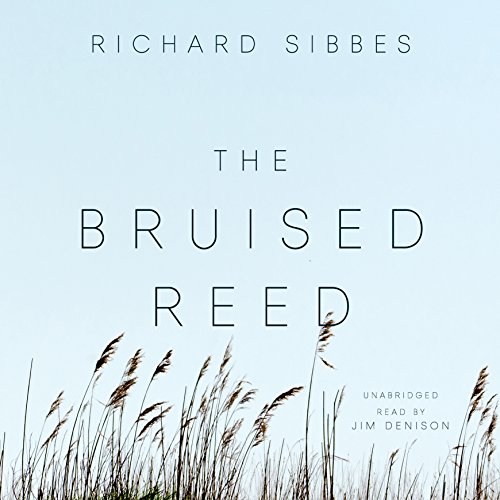 By: Richard Sibbes
Narrated by: Jim Denison
Try for $0.00

Richard Sibbes is widely considered to have been one of the fathers of Puritanism in the 17th century. His passionate sermons and devotional works have persisted throughout the centuries and continue to influence modern-day scholars and people all over the world.

Taking a phrase from Matthew 12:20, Sibbes explains what it means to be a "bruised reed". It is a metaphor that exemplifies the way in which God humbles sinners by allowing them to see sin in the way that he sees it - the lesson being that God sometimes wounds before healing but with the ultimate goal of deepening our love for Christ.

Sibbes believed very strongly that "God's love rests on Christ" and often spoke of the comfort to be gained by acknowledging this. He preached that the same can be had for those who live in Christ and seek redemption for their sins.

What listeners say about The Bruised Reed

As a Christian who has struggled with depression and grief over sin, I found this book to be a great source of comfort. The author with great mercy and grace shows how God uses our struggles to slowly grow us into the person of faith that he wants us to be.

The content of the book was great, but unfortunately the monotone of the narrator made it difficult to follow. I'm sure he did it because he didn't want to insert his own interpretation into such a renowned work of Christian history, but instead of helping me "see the words on the page" as it were, it made me miss some of them altogether. I found myself having to rewind section after section, and think I'll just have to read it on the page soon.

The performance is a bit dry, but this is a must read (or listen) for all who follow Christ. A sound reminder for those who suffer for Christ (the bruised reed), and those who struggle (the smoking flax). Especially if you are a bruised reed due to someone who is smoking flax.

A collection of wisdom that any Christian will benefit from. From how we see Christ, to how we should deal with suffering, Sibbes takes a proper view of things,

I like the narrator and Sibbes beautiful way of describing Christ’s love for the sinner. Very spiritually moving book, but the structure is monotonous.

The narration was so poor I couldn’t get through five minutes. Sounds like Siri or Alexa’s brother reading.

A comfort to my soul

Brother Sibbes described the Lord Jesus's mercy and grace as our refuge during our time of struggle and trials. He is our strength and this book is a reminder of the love of Christ.

I've listened to it 3 times so far. Written centuries ago and yet has timeless relevance.

This is one of my favorite books I’ve ever read. I’m very thankful to have found this book. If you are struggling in your Christian walk, buy this book and you will not be disappointed.

Can’t put into words how much this has blessed me! My thirsty soul just got it’s thirst abundantly saturated!!!

" He scatters diamonds and pearls with every sentence. " I could listen to it over and over.

A great book surprising to hear the date it was published at the end! useful to any walking Christian

Rather dated, unsurprisingly since it was written in 1630.No more than mildly diverting. Too fundamentalist.

absolutely amazing book for the lowly