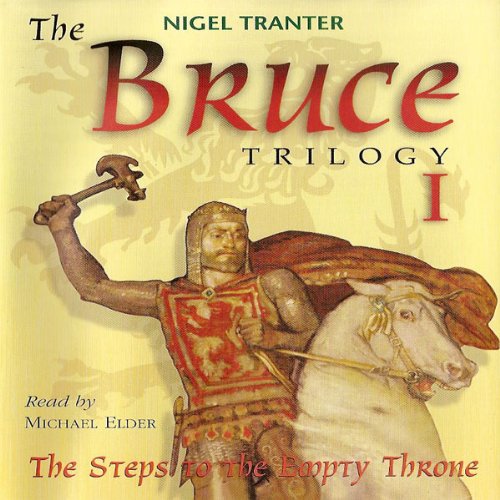 By: Nigel Tranter
Narrated by: Michael Elder
Try for $0.00

The compelling story of Scotland's hero-king who, tutored and encouraged by the great William Wallace, united his despairing people in a deadly fight for the throne and national survival.

In the first of this best selling trilogy, Nigel Tranter charts these turbulent years, revealing the flowering of Bruce's character, sustained by a passionate love, not only of his land and people, but...

What listeners say about The Bruce Trilogy 1

The Bruce Trilogy 1: The Steps to the Empty Throne

The problem Gary wrote about in his review on July 5,2009 still exists on August 26, 2010. I am told," no estimated time as to when an Audio Bug will be fixed". I am not holding my breath. I am very disappointed.

I am a big Nigel Trantor fan and have actually read the book in hardcover, and it is a great book! Unfortunately, one would never know it by listening to THIS copy. The glitch has not been fixed, yet Audible is still selling and downloading the copy.

Captures the spirit of the time

If you could sum up The Bruce Trilogy 1 in three words, what would they be?

I've read the full version and this abridged version does the tale justice.The story flows seamlessly, and the narration is emotion packed. If you want a quick (well rather quick) introduction to a major foundation of Scottish independence, this is an excellent choice.

He captures the time and the emotion.

The wooing of Elizabeth De Burgh is given full justice, and for a book written in 1969 is very contemporary. Women lost a great champion when Nigel Tranter, the author, died in 2000.

Thus was my first purchase and I didn't read the description all the way through. Not the unabridged version ... takes away alot from the story. Very disappointing and not worth the purchase

an easily accessible story form overview of the power politics of the wars of independence.

The Bruce Trilogy 1: The Steps to the Empty Throne

This trilogy tells the story of Robert the Bruce and how, tutored and encouraged by the heroic William Wallace,he determined to continue the fight for an independent Scotland, sustained by a passionate love for his land. Nigel Tranter succeeds admirably in bringing the story of Robert I - Scotland's greatest King - to life. Not only is his historical research near flawless, but the book is graced by that indisputable mark of a great story teller the reader is wholly absorbed into the world of the Bruce and his friends. Tranter also manages to draw a whole mixture of feelings from his readers - love, hatred, admiration and even that strange mixture of respect and disgust for Edward I that Bruce himself is said to have harbored. Nigel Tranter he is one of Scotland's most prolific and respected writers. He has an amazingly broad grip of Scottish history' ? He is an accomplished writer of compelling and unforgettable historical novels' With his imaginative dialogue, he provides a voice for Scotland's heroes Scotland 'Tranter's popularity lies in his knack of making historical events immediate and exciting. These audio books are very amazing story tale with nice pace of thoughts and free flow of story line. This audio book is nice story telling style. I was most certainly not disappointed.

great story but why the music and sound effects?

great book but irritating music between chapters and sound effect. not needed at all and spoils it

Definitely - this is an excellent account of the life of Robert the Bruce. While it is classed as fiction, it is a very accurate account of what happened during the Scottish Wars of Independence. This version is abridged, but is still contains all the key elements from the written books, and it is excellently read by Michael Elder.

My two favourite character is Robert the Bruce, who led the most amazing life. He had everything but the crown of Scotland, which he took by murdering his rival because he feared for his life. He then lost everything - most of his brothers were executed, his wife, child and sisters were imprisoned. He went on the run, hunted and in desperate need of help, while he developed a system of guerilla warfare that eventually led to him winning back his kingdom. There is no more inspiring story than that of Robert the Bruce, of a man who went from being hunted through the Scottish hills to being the king who led his people to victory at the battle of Bannockburn. This is a fantastic story.

And the book is full of other inspirational characters such as the Black Douglas, William Wallace, Robert the Bruce's grandfather (Robert the Noble).

Which character – as performed by Michael Elder – was your favourite?

Robert the Bruce was definitely my favourite character as read by Michael Elder. In history books, Robert can seem a little one-dimensional, but Nigel Tranter wrote his books to show Robert as a man, as a noble warrior and as a king. The combination of Nigel Tranter's descriptions of Robert and Michael Elder's reading of the book really bring Robert the Bruce and a host of other characters to life. This is not history from a history book, but a rousing tale of wars, battles, legends, and heroic men and women.

Robert the Bruce had a most amazing life, and these books are a very accessible way of reading about that life.