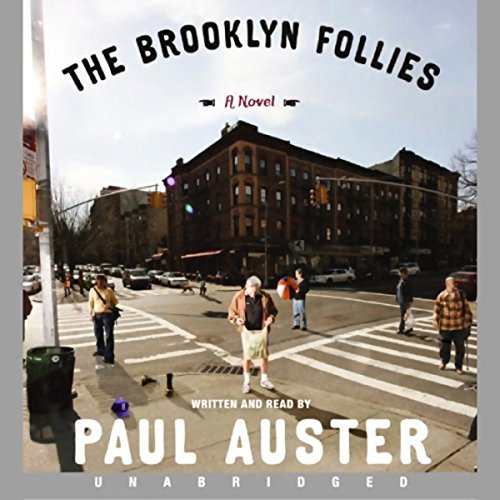 Nathan Glass has come to Brooklyn to die. Divorced, estranged from his only daughter, the retired life insurance salesman seeks only solitude and anonymity. Then Nathan finds his long-lost nephew, Tom Wood, working in a local bookstore, a far cry from the brilliant academic career he'd begun when Nathan saw him last. Tom's boss is the charismatic Harry Brightman, whom fate has also brought to the "ancient kingdom of Brooklyn, New York". Through Tom and Harry, Nathan's world gradually broadens to include a new set of acquaintances, not to mention a stray relative or two, and leads him to a reckoning with his past.

Among the many twists in the delicious plot are a scam involving a forgery of the first page of The Scarlet Letter, a disturbing revelation that takes place in a sperm bank, and an impossible, utopian dream of a rural refuge. Meanwhile, the wry and acerbic Nathan has undertaken something he calls The Book of Human Folly, in which he proposes "to set down in the simplest, clearest language possible an account of every blunder, every pratfall, every embarrassment, every idiocy, every foible, and every inane act I had committed during my long and checkered career as a man". But life takes over instead, and Nathan's despair is swept away as he finds himself more and more implicated in the joys and sorrows of others.

The Brooklyn Follies is Paul Auster's warmest, most exuberant novel, a moving and unforgettable hymn to the glories and mysteries of ordinary human life.

"Auster has written a sublime soap opera about the ways in which people abandon and save one another. He captures a historical moment, our twisted America, and he offers a message of hope. Love will save us. We will save each other. Auster employs tough-guy talk and funny, believable stories of folly in his search for wisdom and goodness." ( The Boston Globe)
"Probably the first authentic attempt to deal with the post--September 11 world . . . It is a multilayered tapestry, with whimsical chapter headings and Dickensian depth." ( San Francisco Chronicle)
"A bighearted, life-affirming, tenderly comic yarn." ( The Washington Post)

What listeners say about The Brooklyn Follies

Brooklyn IS Still the World

I was put off at first by what I thought was an unconnected series of vignettes about a self-pitying, self indulgent late middle aged white guy. But as I listened it became clear that Paul Auster had in fact captured not just a slice of life, but a fairly substantial cross section of it. That he set his story in Brooklyn, my home town, made this story all the more compeling to me, but even those who don't recognize the street names will recognize life's turns and the emotions they evoke as Auster describes them. By the end, I not only felt sympathy and kinship for Nathan Glass, the main character and narrator, butI felt as though Glass, and Auster, felt it for me.

5 stars are not enough

This is a fast-moving, engrossing, and thoroughly enjoyable novel. It starts as Nathan moves to Brooklyn, supposedly to die. He is rather alone in the world, ashamed of his failed marriage and of his estrangement from his daughter. As the story progresses, a vivid cast of characters is introduced, inluding Nathan's long-lost nephew and niece, his grand niece, an eccentric rare book dealer with a criminal past, and various other characters from the Brooklyn neighborhood. Nathan's involvement in their lives gives meaning to his own, and through unpredictable twists of plot, he is transformed into someone with a more positive outlook on life. Beautifully written and well narrated by the author.

I have long loved Auster's books, but now I know that I have to listen to them, not just read them. I agree that 5 stars are not enough -- it has been completely satisfying listening to this wonderful book. The pacing provided frequent, unpredictable surprises. The reflections of Nathan on everything around and inside him are fresh, certainly not detached, and they moved me frequently. I was uneasy sometimes about everything moving to too many happy endings, but the unease was unwarranted. I'll certainly listen to this one more than once.

As Surprised as I Am

One never knows. Confession: Considering myself literate, I have, nevertheless never "read" anything by Auster. Heard of him, but never read him. Wanted to get around to it, but not until now. Raised in Park Slope until I was eight, I hoped this tale would be the perfect introduction to Auster --a way to relate to him, to test him, to guage his worthiness. I'm hooked now.

Not because of the Brooklyn connection but because of his communicativeness, his intelligence, and his effortless conversational story telling. (He's not a bad reader either.) He's neither afraid of the cliche nor the sublime (nor the crude either.) And the book is chock full of informational tid-bits, particularly of the literary ilk. Wonderful returns to Kafka and Cervantes, et al. (Although I was disappointed not to hear him include D. M. Thomas on his list of writers who died much too early.)

Auster's characters are real and likable. (Even when improbable.) His sudden shifts from person to person, from unexpected incident to unpredictable result drive the story merrily along. It would be excellent to meet Nate again, to see who else he might come across, as his and Tom's lives continue on into the future. This is a story line that still has life in it.

Who knows what Auster's other, earlier books may bring, but this here story sure is sending me to them. I can't wait to listen to another.

Ordered this almost at random, because it was on sale and I needed a listen.

A bit of rambles

I can't decide if it was the content of this book or Auster's voice that put me right to sleep. Basically , this is a lot of pompous banter about americana pulp fiction wrapped around the story of 9 year old Lucy, who shows up alone on the doorstep of her spinster uncle. She is taken in by her curmudgeonly great uncle who is dying of cancer, and she brings light and joy back into his life.
Tangentially, the story includes love, loss, and a plagiaristic scandal.
It is a good story, if you can forgive the pompous rambling.

I heard the voice of Nathan Glass as Paul Auster read his own words. Cannot imagine a more perfect tone. Pre 9/11 Brooklyn and indeed the USA is captured by Mr. Auster as he finds redemption from a life looking at his own naval. There is life and there is living. Nathan Glass lived but soon after moving to Brooklyn and reuniting with his beloved nephew he starts living again and listening to this story we rejoice in his great good fortune. There is a wild mix of characters well described and rounded out. We meet several real scoundrals, some strong women and a smart and sometimes smart ass little girl named Lucy who gives everyone a second chance. If you are looking for wild action and mystery this book is not for you. If you are anywhere right of moderate the politics in the book will turn you off. Nathan and crew are decidedly Democrat. However, if you are in the mood for a book in which things turn out all right this is for you. 9/11 happens just as the book ends. Good job Mr. Auster. Write more.

I've never read Paul Auster before, but suspect this is not his best work. Brooklyn Follies is well written, well read, and mostly interesting, with a likable narrator. I'm giving it only three stars because its creaky plotline is at times trite and predictable and at other times strains credulity. The plot is also occasionally advanced through tediously long monologues by various family members, monologues which copy exactly the style and syntax of the narrator himself, rather than what you'd expect from the various characters. (As an aside, I didn't understand why are there musical interludes if this is an unabridged book?)

One of America's Greatest

I love Paul Auster and "Brooklyn Follies" is one of Paul's best. Slightly less dark and troubling than the bulk of Auster's work, "Brooklyn Follies" is filled with characters that are believable and three dimensional, with all of the foibles and grittiness of real people. Character development is Pual's gift; no one in contemporary literature is his equal on this front. And like all of Auster's books, the prose is well crafted and beautiful. If you love the English language, you'll love Pual Auster. As a result of Paul's tidbits of literary trivia, I always come a away from his books wanting read other works he intelligently refers to. After "Oracle Night", I reread all of Dashiell Hammet's mystery novels. "The Brooklyn Follies" is required reading by anyone who calls himself literate.

I listen to books while walking; this morning I walked an extra mile, just to hang in with uncle Nate until his last words had been spoken.