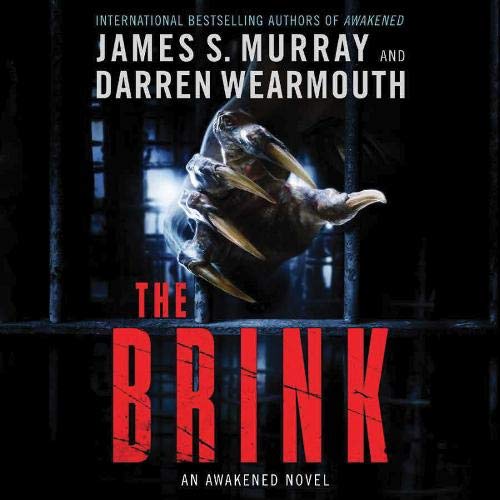 “Murray and Wearmouth’s latest THE BRINK is a white-knuckled rollercoaster. This novel is chocked full of everything I love: strange creatures, a world teetering on the edge, and heroes who I’d want at my side during any firefight. This isn’t just a story hopped on steroids - but one injected with nitrous and blazing on all cylinders. Give me more!” (James Rollins, number one New York Times best seller of Crucible)

Awakened, by one of the stars of TruTV’s Impractical Jokers and a best-selling science fiction author.

Former NYC Mayor Tom Cafferty has been haunted by the horror of a single day. The opening of the brand new Z-train subway line beneath the Hudson River - the supposed shining moment of his tenure. But the ribbon-cutting ceremony turned deadly when the train carrying Cafferty’s wife and other citizens was attacked by a horde of hyper intelligent, bloodthirsty creatures previously unknown to humanity.

Everything changed for Cafferty, ex-NYPD officer Sarah Bowcut, and tech-expert Diego Munoz that day. They had uncovered the deadly truth: The attack was no accident. And now the creatures that wreaked havoc underneath New York have spread worldwide, and with a massive cover-up - and a secret organization holding nations hostage with the knowledge of how to kill them - Cafferty’s team must fight against impossible odds to save the entire planet from an apocalyptic scale disaster.

An explosive and thrilling international adventure, the stakes are even higher in the latest book from best-selling duo James S. Murray and Darren Wearmouth!

What listeners say about The Brink

This is just a fabulous read and follow up of Awakened. Scary, Chilling, Suspenseful and will have you wondering what is next. The narrating is just amazing to listen to, providing a great visual in your mind. Very excited to learn what's next!

Enjoyed every moment in this book. None stop action. Murray's voice is soothing to listen to.

The most scariest book I read before Awakened .!! I love these books.!!!! What a thiller

The first several minutes was a commercial for the TV show. Then the hardship started.
The narration of the first book was ok to good but this one is so bad that several times I was tempted to stop but I never before I did not finished a book , I was so close.
Some how the characters this time became annoying , As I get closer to the end I was hoping all of them got blown away.
This monster book became monster less and what make the first book entertaining was left as background noise.
I read other people reviews and realized I was listening to a different book.
One good thing I have to say this is the perfect low budget ,low quality , bad acting SYFY movie of the month,
If I see this movie in SYFY will give it 5 starts.

A beautiful sequel chilling and thrilling

I have to admit as a fan of the jokers, come across the first novel in the awakens series I was pleasantly surprised. So after waiting an entire year, I was pretty excited to read the second book. Listening to the audiobook really suck you into the story. Growing with the character development and on the edge of my seat much of a time finding out which twist interns the story would take. While I am sad to have to wait a few more months for the third novel, excited for more great things to come

The goofball can write and tell a good story.

I am a huge fan of the show. So I took the time to do the book. I was actually surprised at how good it was a great book actually what a great set of books looking forward to the third. The writing allowed me to visually the story. Incredible details.

I’ve been sitting on this one… with no good reason. I enjoyed Awakened (I believe I called it a candidate for the best of 2018). I think I was worried that The Brink was going to let me down. In comparison to the title I gave Awakened – it did, but not really. The Brink was less of a horror novel and more of a political thriller with some horror elements thrown in. I’ll explain…

The Brink tells the story of Albert Van Ness and his shadow organization. I have to tip my hat to Murray and Wearmouth – I honestly cannot think of a villain in another story that I disliked more than Van Ness. He was hateable in every single way. His organization is doing things that are awful and he’s trying to extort major governments for massive amounts of money in the process.

Part revenge story and part political thriller – The Brink was still an well told story. I flew through it and couldn’t wait to see what was next. The opening (alternate history) was fascinating and told me right out of the gate that The Brink was going to be different.

A good book for those who like political thrillers and horror books. If you read Awakened – you’ll enjoy The Brink as well.

Amazing storytelling and an all around amazing book

Murray and Darren have did it again and wrote this amazing masterpiece The Brink!!! It’s an amazing book just like Awakened and Murray is an amazing narrator making the audio book that much more enjoyable!!! Horror and non horror fans alike can enjoy this fast paced thriller and you won’t be disappointed!!!

Incredible story and captivating characters and James S Murray does an absolutely incredible job at performing in this audiobook. His voices bring the characters to life and make it that much more captivating.

The Brink is the sequel to the international best seller Awakened novel! James Murray and Darren wearmouth has done it again if you love science fiction,monsters, heroes and horror this is the book for you