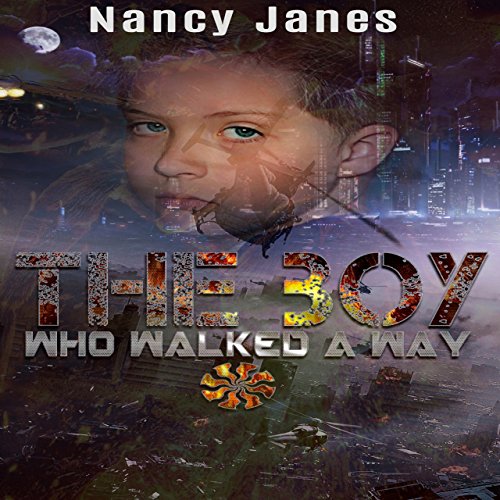 The Boy Who Walked a Way

The Boy Who Walked a Way

In the year 2162, a young boy named Jal Valhyn is caught in a maelstrom of violence and conflict. His country is at war and the world government based on humanistic principles that had fulfilled its promise of a halcyon peace for over a century has fallen. Alone and helpless, he has an encounter with an invisible being that leads to a seven-day journey. With his two appointed companions he sets out for a safe haven far from the world of danger and turmoil. Each day's trek brings the gift of new friendships and a growing awareness that life has dimensions grounded in more than the material. He intuitively understands the faith that sustains the inhabitants of an enduring peaceable kingdom.

The Boy Who Walked a Way is a touching literary fantasy novel by Nancy Janes about the true power of belief. Representing the child inside all of us that neither age nor time can eradicate, young Jal is a perfect personification to the untainted and wholehearted faith and belief in miracles that the innocence of childhood provides. With Bea and Sammie as correlating characters who impact Jal's present and future, the two companions teach him the importance of using his troubles as an asset in developing a sense of mastery over his circumstances and in turn give listeners a glimpse into the importance of trust in yourself and the personal conquering of adversity.

With a deep and gentle meaning that is born of violent circumstances, The Boy Who Walked a Way is a rare young adult novel that appeals to both genders equally. Though born of Christian roots, this profound story is a perfect fit for listeners of all backgrounds and faiths that truly inspires with its touching journey of self-discovery, belief, and personal mastery. With a rich and detailed world that has descended into out-of-control chaos, this grand novel is an epic, touching fantasy that will inspire and entertain for years to come.

can read it for fantasy, for comfort

The Boy Who Walked A Way is set in the future where peace is both valued and carefully monitored.  As is the case with most societies, greed for power made war imminent.    Jal Valhyn is a young man whose parents are conscripted into the war efforts leave him behind in the care of his Uncle.   After a short time, his uncle disappears due to his job with the war and the war creeps closer and closer to home.  Jal finds himself alone one night and sets out to search for his uncle and parents.  His fear and helplessness leads him to an invisible mystical being who offers him comfort.   Sammie and Bea, with orders from the mystical being, set out to deliver Jal to his new home providing him with safety and food while teaching him about his new home.  It is through fab-u-tales (combination of fables and tales or parables) that Sammie and Bea begin Jal’s teachings that there is more to this world than material belongings and that one must make sacrifices.

Jal is a smart boy who matures through his lessons realizing that his faith is sustaining him and his friends as well as making life more peaceful.  He learns through the fab-u-tales to give thanks for that which is provided whether he sees the givers or not, he learns that patience, observation and love are important.

Well written with strong characters that are fully developed.  It is a calming and simple story that does not get in the way of the message. With each new friend Jal meets or hears a story about, he discovers that each has a unique story about their transition into this new peace filled world.  It is a message that everyone needs on faith, both in themselves and others as well as the value of vanquishing adversity within their own journey of self-discovery.  Although the stories are short, they are meaningful.

Nancy Janes takes complex issues and breaks them down making them applicable to everyone.  She further recognizes that issues for children are much larger, emotionally worse and overwhelming  thus providing unique insight and reminders of what we as adults went through as children.  A unique reading with touching moments and written in a calming style.

Janes has given her readers a piece of writing that strengthens faith without assuming or forcing any specific religious beliefs on anyone.  Further, she provides a wonderful opportunity to read, dwell on the writing and arrive on one’s own path of self-discovery.

I loved this book – there was no violence, no foul language or sexual insinuations of any kind. This is one of those rare finds in which someone can read it for fantasy, for comfort, or for those few moments where you wish to reconnect with your inner child.

The narrator, Mary Jane Conlon was delightful.  She spoke softly but clearly; her reading became the personality of the story – calm and serene.  I feel Conlon gave the story life with her talented skills of narration and voices.  I cannot imagine anyone else doing such a fantastic job bringing the story to life as she did - you could feel the confusion, sense of loss, peace and so much more.

I experienced no issues or problems with the production of the audio book.

A satisfying and engaging YA listen. The narrator does a fine job of storytelling: characters come to life and the pacing is nicely varied. She's especially good with dialog!

If you could sum up The Boy Who Walked a Way in three words, what would they be?

A compelling young adult fantasy novel set in the future.

Which character – as performed by Mary Jane Conlon – was your favorite?

The narrator does a wonderful job bringing the characters to life. The journeys of Jal, Sammy and Bea are gripping, but often lighthearted and charming too.

Am looking forward to the next book in this series!

A Lot of Potential

Would you try another book from Nancy Janes and/or Mary Jane Conlon?

What a great idea for a story. Mary Jane Conlon expertly read the novel. I want to look for more books that she performed. I was, however, disappointed in the novel's plot which seemed disjointed and didn't flesh out expected aspects of the narrative.

Would you ever listen to anything by Nancy Janes again?

Have you listened to any of Mary Jane Conlon’s other performances before? How does this one compare?

I want to listen to everything that Mary Jane Conlon has performed. She did a terrific job!

Was The Boy Who Walked a Way worth the listening time?