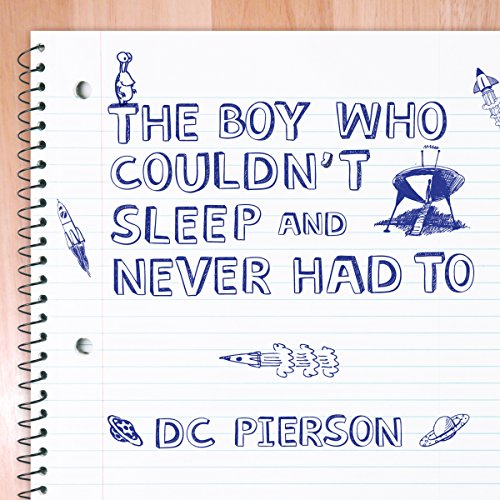 The Boy Who Couldn't Sleep and Never Had To

When Darren Bennett meets Eric Lederer, there's an instant connection. They share a love of drawing and the bottom rung on the high-school social ladder. These things (combined with absentee parents, Darren's evil older brother, and a pathological fear of girls) drive them toward an ambitious project: a comic book that evolves into a series of graphic novels that become a movie trilogy, all before they even put pen to paper.

Then Eric reveals a secret: He doesn't sleep. Ever. Instead, at night, he masters video games, geeks out on obscure Brazilian music, and suffers, occasionally, from violent hallucinations. When word leaks out, he and Darren suddenly find themselves on the run from mysterious forces. Is it the government trying to tap into Eric's mind? Or is there something else Eric hasn't told Darren, like the possibly that he has willed one of their creations to life, and now it is hunting them down?

Spectacular! Hard to turn off and sleep...

This is my favorite new book I've discovered since I first encountered Haruki Murakami's ouvre. "Normal" enough to form emotional attachments with the characters and become invested in the story, yet fantastical, and utterly bizarre. Literary, and yet things happen...

Actually a pretty good book, only problem I had was the ending leaves you wanting more closure, and there's nothing.

I finished in a day!

I really loved this book. It's in the same vein as Youth in Revolt and I loved that book too. It's a stylized, humorous, sometimes fantastical coming of age story with very natural feeling characters. The author, who is a comedian and actor, in addition to writing (he co-wrote and costarred in the movie Mystery Team, a favorite of mine) , does a great job of narrating the story.