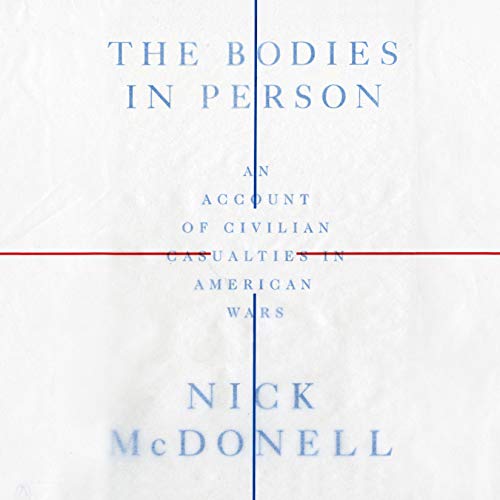 The Bodies in Person

An Account of Civilian Casualties in American Wars
By: Nick McDonell
Narrated by: Nick McDonell
Length: 8 hrs and 15 mins
Categories: Nonfiction, Politics
4 out of 5 stars 4.0 (4 ratings)

The Bodies in Person

Since the beginning of the wars in Iraq and Afghanistan, uncounted thousands of civilians have died in the fighting and as a result of the destruction. These are deaths for which no one assumes responsibility and which have been presented, historically, as fallout. No one knows their true number.

In The Bodies in Person, Nick McDonell introduces us to some of the civilians who died, along with the rescue workers who tried to save them, US soldiers grappling with their deaths, and everyone in between. He shows us how decent Americans, inside and outside the government and military, looked away from the mounting death toll, even as they claimed to do everything in their power to prevent civilian casualties.

With a novelist's eye - and hundreds of hours of recorded interviews - McDonell brings us the untold story of the innocent dead in America's ongoing wars, from leveled cities to drone operation centers to Capitol back rooms. As we follow him around the world, The Bodies in Person raises questions not only about what it means to be an American but about the value of a life, what it means to risk one, and what is owed afterward.

Nick McDonell is a novelist and journalist. Born in New York City in 1984, he studied at Harvard and Oxford. He is the author of several books, including the novel Twelve, which was a New York Times best seller.

“Striking...pulsating with attention to moral principle.” (The New Republic)

“This first-hand contemplation of death in war is a gift to future historians and a gesture to moral philosophers. It helps us to see the world as it is while gently encouraging us to ask how it might be better.“ (Timothy Snyder, author of On Tyranny)

"Some of the finest war reporting by an American that I have ever read.” (Dennis Covington, The American Scholar)