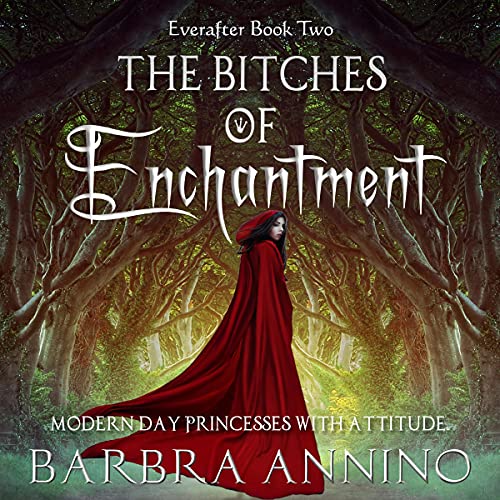 The Bitches of Enchantment

By: Barbra Annino
Narrated by: Erin Fossa
Try for $0.00

When last we left our fierce princesses - rulers of the United Kingdom of Enchantment, they had found themselves in grave peril. Facing an unseen enemy, an unknown nemesis. Dare I say, a villain. Not one of mine, of course. No, whoever was behind the spell that stole the memories of my princesses was far darker than any my imagination had ever conceived. This villain was far more cruel than a stepmother, more heartless than a greedy queen, more diabolically patient than a wicked witch. Whoever had cast the spell had a sinister power the likes of which I had never seen in my homeland.

But if you live long enough, as I have, you hear whispers on the wind of such darkness. Soulless creatures who will stop at nothing to destroy anything - or anyone - who blocks their crooked path. I have heard of such villains. Others have written about them. They exist in the shadows until some thread of their own story unravels, and they seek out a new narrative.

Not that I know who is behind the undoing of my heroines. If I did, I would have given them the tools to fight the evil. I would have written them their happy endings. Alas, I know not what will become of them now in this strange new world. I know only that between them, they are more powerful than they ever realized. And that the one destined to save them all need only to remain steadfast and strong to rise to victory. Then maybe - just maybe - this won't be the end of their tale.

However, the powerful clap of hoof beats, the drumming of soldiers approaching, and the smell of treachery in the air surrounding my tiny cottage as I write this, tells me that it could be the end of mine.

What listeners say about The Bitches of Enchantment

I am really excited for the third book. Funny story. The reason was great. Just wonderful!

if you thought the first one was good then you'll love the second installment into this series. if you love retelling of old classics then this is the series for you.

Loved it. The series is smart and witty. You can imagine all of these fabulous women together in real life. Barbra is a great writer and story teller.