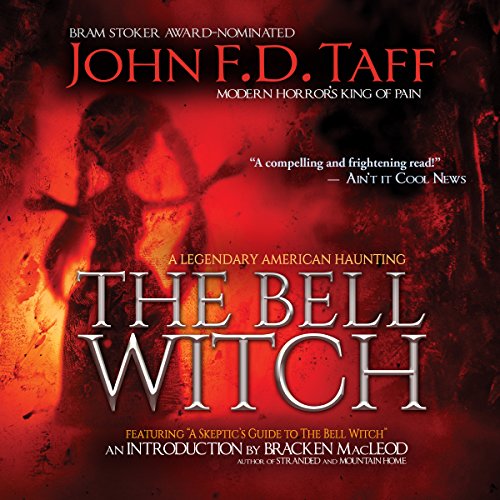 Sometimes the scariest tales are true

It's 1817, and Tennessee is on the Western frontier as America expands into the unknown. In idyllic Adams County, home of the Bell family, there exists a collection of tight-knit rural communities with deeply held beliefs. And even more deeply buried secrets.

Jack and Lucy Bell operate a prosperous family farm northwest of Nashville, where life with their many children is peaceful. Simple country life. That is until those secrets take on a life of their own and refuse to remain unspoken.

Much has been written about the legend of the Bell Witch of Tennessee, but the details of the Bell family's terrifying experience with the supernatural have never been told in quite the way that Bram Stoker Award-nominated horror author John F.D. Taff has conceived.

In his novel, for the first time, the Witch has her own say. And what she reveals about the incident and the dark motivations behind her appearance reaches way beyond a traditional haunting. Forget what you've heard about this wholly American legend. What you believe you know about the mysterious occurrences on the Bell farm is wrong. Uncover the long-hidden reality that's far more horrifying than any ghost story you've ever heard.

What listeners say about The Bell Witch

Now this is a page-turner!

Absolutely loved this story! it was well written and hid some good truths in the story as well. loved the fact that it was based on a true legend and happening! not your typical ghost story, but it us intensely thought provoking and held my attention for the entire book. that is a rare combination for me. I give this 5 stars all the way!

Not a bad story. I thought it would be a origin story of the Bell Witch from The Blair Witch Project. Suprising as it was, it still was a good story.

A lot of triggers

If you're ok with long, detailed rape scenes, physical abuse, the N word, and many repeated conversations in which you know the answer before the characters even slightly catch on then it's not a bad story.

That being said, the story idea is creative on its take of witch stories which helped keep me going to the finish.

In sum, its a pretty good story, it's just hard to swallow.

I wouldn't recommend listening to it around children or at work.

really enjoyed this book. such love for the spoken word. I fell I miss the witch myself. :0)