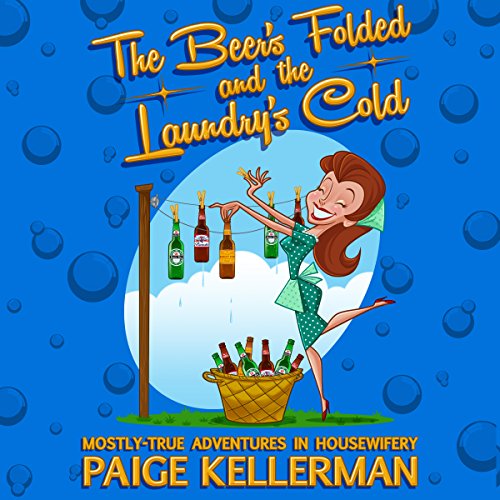 The Beer's Folded and the Laundry's Cold

Mostly True Adventures in Housewifery
By: Paige Kellerman
Narrated by: Rebecca Hansen
Length: 5 hrs and 16 mins
4 out of 5 stars 4.2 (22 ratings)

The Beer's Folded and the Laundry's Cold

By: Paige Kellerman
Narrated by: Rebecca Hansen
Free with a 30-day trial

In The Beer's Folded and the Laundry's Cold: Mostly True Adventures in Housewifery, Paige Kellerman follows up her hilarious debut - At Least My Belly Hides My Cankles - with the natural next step-taking on budgeting, babies, and trying to keep the day drinking down to a minimum while staying at home.

At the core, it's a story of a woman who worked in an office and didn't, instead working on trying to make money stretch like a two dollar pair of panty hose, upping her fashion game to include occasionally wearing pants, and using dull childproof scissors to cut out coupons and wads of gum from her kid's hair.

Listeners will learn how to:

This hilarious follow-up is not a "how-to" on being the perfect parent, but rather a tale of one woman running the house like a boss-that is, when she's not scraping failed Pinterest-inspired experiments out of the crockpot, filling the bird feeder and waiting for rogue squirrels, or inhaling the smell of a laundry sheet like a Snuggle-scented sedative. Housewifery just met its match.
©2015 Paige Kellerman (P)2017 Paige Kellerman

What listeners say about The Beer's Folded and the Laundry's Cold

I can see my wife in almost every page

Married for 15 years now and OMG can I see my wife in almost every page. From the internet friends, knowing a guy who knows a guy, the struggles of being a stay at home mom, a professional, a mom, a wife, etc. the author really grasps and conveys the feelings of housewifery. Loved the 7 Mondays. Get it. Listen to it. Laugh like crazy. I was voluntarily provided this free review copy audiobook by the author, narrator, or publisher.

I so enjoyed this tongue in cheek listen. I found the musing of the main character to be realistic in the aspect that its hard to remember what day it is when being a stay at home mom. The author was new to me, while I've listened to the narrator previously. I think the author did a great job with the humor in this book. My review is not a synopsis of the book, but rather my opinion of it. I requested a review copy of this audiobook and have voluntarily written this review.

I enjoyed this audiobook. The humor was well written without being overdone. The narrator did a wonderful job of making the story incidents relatable. I have recommended it to others especially those with small children.

This was a very easy listen. The narration was great and everything flowed really well. I thought about my wife constantly as I listened, and laughed out loud several times (in my car so everyone around thought I was crazy!!!).

I was given a copy of this book in exchange for my honest review.

Great performance made the book funnier

The content in this book is sometimes cute, sometimes funny, sometimes over the top. But Rebecca Hansen's narration managed to squeeze every chuckle out of this book, and even a few that might not have been written into it. Bravo to the best narration I've heard in a while.

The book is about a harried housewife and her daily toils. There were times when I wanted to slap her for obsessing on stupid things, misleading her husband about the budget, or forgetting her coupons at home. I think a good dose of focus (or Ritalin) would have made her a little more sympathetic and probably for a less funny book, but it's sometimes hard to feel sympathy for someone who is their own worst enemy.

A few times, I shouted, make a f***ing list! But alas, there would be no book if this lady had her s*** together.

But if you ever feel like a loser, this book will cheer you right up, so give it a spin and see just how well your life is going after all. It was still worth the credit, and I'd have happily paid for it even though I was given a free copy of the book in exchange for an honest review.

Relatably funny even for a family guy!

This is a fantastically humorous look at the experience of an unwitting young lady as married life and motherhood steamroll over her naivete and initiate her into the &amp;quot;joys&amp;quot; of career motherhood and some well-earned maturity. The author's ability to write humor is an easy road trip for the listener with many laugh out loud moments as her experiences strike a resonant chord with those who have been there or are going through it.

The narration was well done though my wife found the narrators voice a little hard to listen to. I didn't have any problem with it however.

I was given a review copy of this book in exchange for my unbiased review and opinion.

Overall, this is an entertaining listen. It could be considered a modern-day Ann Landers with a touch more humor. I'm actually a stay-at-home husband, so I could identify with many of the observations. It is a common theme to hear friends dismiss my job as audiobook narrator/producer and zombie novel writer as not really working.

Some of the bits seemed almost forced at times like the attempt to bring out the humor was more important and it made me forget what she was talking about. I did like how she always referred to her spouse as simply &quot;Husband&quot;. I enjoyed it overall and would share the title with friends.

Ms. Hansen fit fine as the narrator, bet there were times when her voice would lull me out of the story and into a daydream. Of course, that could've just been the road as I listened to this as I drove to and from a dog show in my RV.

This title was furnished by the author/narrator in exchange for an honest review. I don't write &quot;fluff&quot; pieces, so if I love or hate it...I will not be shy in telling you.

I loved this listen! It totally took me back to my days of being a young, stay-at-home mom with my two daughters and working husband while struggling (and laughing....yes, sometimes through a few tears) at the realities of every day life. SO relatable and had me laughing out loud many, many times! The chapter about trying to live up to that Pinterest lifestyle had me howling!!! Rebecca Hansen did an excellent job with author Paige Kellerman's hilarious and heartwarming take on how life REALLY is for domestic goddesses everywhere! Bravo, Ladies!!!

It's not for me

I listened to about half the book and gave up, I really didn't find it that funny mostly hapless.
I was given this free review copy audio book at my request and have voluntarily left this review

A Comedy Any Mother Would Find Humor In!

A Comedy Any Mother Would Find Humor In!


The Beer's Folded and the Laundry's Cold is a comedy by Paige Kellerman.


If you are a housewife or a mother or wife, you will find laughs listening to this. There are definitely several scenarios I have found myself suck in as a mother and wife. I feel this whole title could of used some more structure as the writing jumps around a lot without any warning and it becomes confusing at times. About the time you figure that out, it jumps to somewhere else in time. This is more a rant than a story, but for those of us who have lived even a smidge of this, it can be somewhat cathartic!


This is my 1st read/listen by Paige Kellerman. This is her only audio title. She writes good realistic comedy that is relatable.
Paige only has this 01 title listed on Audible.


This is my 1st listen by Rebecca Hansen and she did a decent job. She spent too much time at one level of voice that is became distracting a times.
Rebecca has 13 titles listed on Audible.