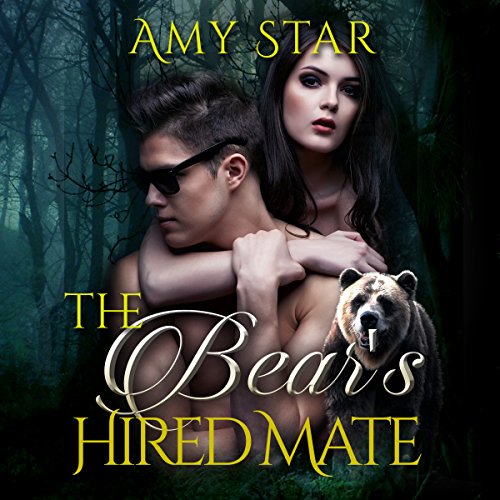 "She was willing to be hired for anything, anything at all..."

Curvy Jane Arnold was a small-town girl who had moved to Las Vegas to start a new life. Only problem was, she was dead broke and desperate for a job. Any job.

Vincent Mezzanote was a powerful billionaire bear shifter with a huge business empire based in the City of Sin. He was a man full of opportunities along with dark secrets.

Now Vincent is recruiting a new personal assistant, and Jane has been invited for an interview. When she arrives, Vincent is stunned.

Not because she is perfect for the job - in fact she is far from it - but because he can tell from her scent that she's the mate for him.

Or does he do both?

What listeners say about The Bear's Hired Mate

This was a well written, short story that was perfect to listen to in one session.

I'm a big fan of PNR, however, I felt this story was light on the "paranormal" side and more of a contemporary romance. Throughout the story there's "bear" politics; however, there is no bear shifting until the final chapter. However, I still enjoyed the story and really liked both Jane and Vincent, and the attractions between them was awesome.

When Jane is interviewing at the tattoo parlor for an assistance position, Vincent immediately recognizes Jane as his mate and he hires her on the spot. Even though Jane is human and he's a bear, their attractions for each other is instant and grows quickly. They finally give into their desires for each; however, Vincent does not tell her he's a bear until after they've spent the night together. She easily accepts what he is and they decide to give their mating/relationship a shot. Throughout the story, there are several super steamy scenes, that will get your heart rate up.

The paranormal aspect mainly comes in when the different bear clans get together to have meetings. During one of these meetings, regarding a family in Vincent's clan who were killed in a house fire, a rival bear clan knows about Vincent's mate being human and makes comments about how humans should not mix with the bear society. After this meeting, Vincent knows Jane is in danger, and the only way to protect her, is to make their mating official and this is when things start to go bad and then to worse.

I've listened to several books narrated by Addison Spear's and she has a very unique voice that is easily recognizable. She is a great narrator for romances and did an awesome job narrating this story.

Fans of contemporary and paranormal romances, would both like this story. There's lots of romance and drama and while a great deal of this story takes place in a tattoo parlor, it is very tasteful and the tattoos focuses on art.

"This audiobook was provided by the author, narrator, or publisher at no cost in exchange for an unbiased review courtesy of Audiobook Blast dot com."

The Bear's Hired Mate is a short shifter romance with a lot of mating drama and a bit of danger drama. There's an insta-mate connection on Vincent's side with the love coming in a bit later and about as welcome as stepping in something stinky. Takes him a bit, but he realizes that deviating from your life's plan isn't so bad at all when you have a hot, sexy, understanding mate who is more than you ever imagined. There are some sinister bad guys and b*tchy women who come into play, as well as family, friends and coworkers who support Jane and Vincent as they find their way. I liked the story and the characters and I will definitely be listening to more audiobooks from this author.

The narrator performed male and female voices well and had good rhythm and flow. Her inflection was good, and she showed the right amount of emotion for what was going on in the story. Her pronunciation was good. I will look for more books that she has narrated.

I received this audiobook for free in exchange for an unbiased review. The number of stars I award in the 5-star rating system is based on where I believe this audiobook rates with other audiobooks of the same type, length and general feel-- not where it rates in comparison to all audiobooks of all time.

If you could sum up The Bear's Hired Mate in three words, what would they be?

She brought out the characters personalities.

Find your own mate.

Jane is running from a mother who does not want to be old. She is always putting Jane down because she is well endowed. She lands in Las Vegas and after going to the last interview before leaving town as a failure and with the last of her money she interviews at the one company that is owned by her true mate. He knows it immediately but does not tell her because he is running from obligation. He knows that he will be the next Head Alpha but thinks it will keep him from his art. This situation puts Jane in danger and she is kidnapped. You must listen to the whole story to get all of the twists and turns. But in the end Jane and Vincent find their places in the Bear Clan.
"This audiobook was provided by the author, narrator, or publisher at no cost in exchange for an unbiased review courtesy of Audiobook Blast."

I really enjoyed reading this short Paranormal Romance. The book was more concentrated on their human side and it did not add much bear shifting until towards the end.

Jane is desperately looking for a job and there is only one more work interview left and she really needs the job.

Vincent is a wealthy bear shifter that owns several upper scale tattoo places. He is happy being single and avoiding his clan responsibilities.

When Vincent meets Jane he knows right away that she is his mate but he tries to fight the attraction. Jane is overqualified for the job and there is no way he can afford not to hire her.

Their romance is sweet with a bit of suspense towards the end. Another clan is trying to cause trouble and Jane could be in danger.

I like the fact that there are no cliffhangers and the conclusion is perfect!

I received this audiobook for free in exchange for my honest unbiased opinion.

I really enjoyed Jane's attitude in this book being a little on the curvier side of things isn't always easy. So when she comes across a job opportunity to be a personal assistant to someone who isn't looking at her body she jumps at the chance.

Vincent didn't even know what he was getting when he hired Jane and that’s putting it mildly. She is the end all to be all in personal assistants she keeps him straight and with time to himself, not easy because he is in such high demand.

Being a bear shifter in the human world isn't always easy, and when he scents his mate and its non-other than Jane he fights his nature until the very end.
Jane falls hard for the big guy but she wants to take things slow but slowly isn't always the best way.

I love the dynamic between these 2 they are explosive and tender. I want more please. 
I also really enjoyed the narration of this book, most enjoyable.

"Provided for exchange for an unbiased review courtesy of Audiobook Blast."

i was voluntarily provided this free review copy audiobook by the author, narrator, or publisher.

Usually books that have shifters with destined mates in them, the couple feels an instant connection. This was the case with this book, but the bear had to do a little more courting than is usual in this genre. I really liked the bad boy bear and how he was both a leader for his people and a tattoo artist. The woman in this book was also interesting and I enjoyed listening to them interact. I got this book in exchange for a honest reveiw

I was given this book for a honest review. What happens when a human and a first son of a werebear clan meet? A prophecy is full-filled.

Short and easy listen with a HEA.

While I liked the concept of the story, there were too many side things thrown in for such a short book. The story just didn't flow smoothly. I would of liked the story more if all of the interactions with the women of the bear clan had been left out. This would have given more time to develop the story between Jane and Vincent, or more time to develop the interactions with the rival bear clan. Aside from talking about it there is not really any shifter action until the end of the book. Jane was a great character. Vincent, being a shifter needed to be a little more dominant.

This is the first book I have listened to narrated by Addison Spear. While she does have a very pleasant voice and good character voices at times the narration was a nice even pace, then it would speed up like she was in a hurry to finish the page.

This audiobook was provided by the author, narrator or publisher at no cost in exchange for an unbiased review.

Awsome to the Extreme

If you could sum up The Bear's Hired Mate in three words, what would they be?

My Four words would be: Intriguing, Angst, Romantic & Exciting

What I liked the most was... the idea of a family pack, only in the form of bears, werewolves, and everything else. Don't get me wrong, seeing all of that in humans themselves is good, but this adds an added ... spice ... an intriguing ... aspect to the story.

These pacts mate for life. That point, I like. The mates start their families, and live for quite some time. I highly recommend this book!

My favorite scene was when Vincent transforms into his bear in front of Jane for the first time. He is able to show Jane his true side, which doesn't happen all that often for him; Vincent is a private man.

Enjoyment, because I was able to enjoy the book without any distractions and really listen to the book.

I'd say read this book, if only to satisfy your own curiosity. And thanks to audioblast for the chance to read the book!