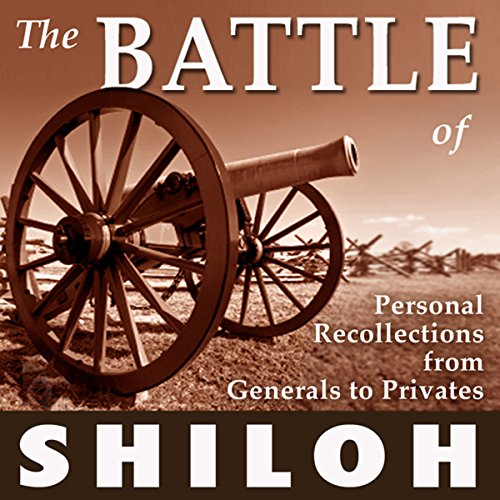 The Battle of Shiloh

The Battle of Shiloh

At daybreak on April 6, 1862, Confederate forces launched a bold suprise attack on the Union army, encamped in southwestern Tennesse. The battle of Shiloh, also known as the battle of Pittsburg Landing, would prove to be the bloodiest battle up until that point in United Staes history. The two day battle would cost a staggering 23,000 casualties. Both sides were stunned at the appalling loss of life. At the time, neither realized that three more years of such bloodshed were still to come.

These are detailed and moving first-hand accounts, from generals to privates, about their experiences participating in this dramatic and historically significant battle.

Brilliantly narrated in northern and southern accents by a professional actor and gifted voice talent, this unique audiobook vividly brings to life the words and heartfelt sentiments of those who wrote these riveting accounts.

As a student of the event, I am happy I purchased the book. I do wish more stories from common soldiers like Stilwell and Stanley had been added, however. It does seem that the narrator has problems with pronouncing "r"s as Hurlbut is called "Halibut" early on and McClearnand is continuously called McClellan. One would think he would have noticed the actual spelling at some point.

POOR LEADERSHIP BUT GREAT FIGHTING OF THE SOLDIERS

If you could sum up The Battle of Shiloh in three words, what would they be?

Would you recommend The Battle of Shiloh to your friends? Why or why not?

Which character – as performed by Andrew Mulcare – was your favorite?

LEADERS MUST LEARN HOW TO WAGE WAR FROM HISTORY EG.HANNIBAL