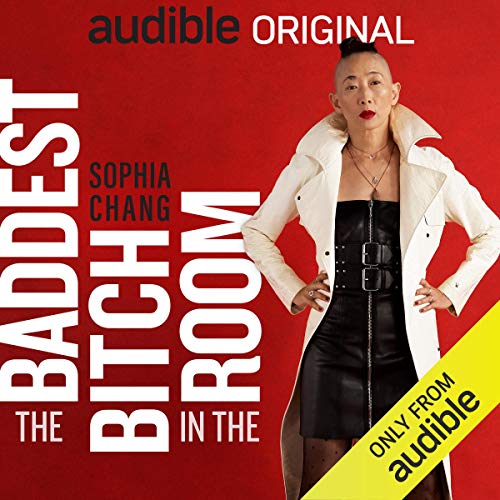 The Baddest B*tch in the Room

Please note: This clean version is meant for younger audiences. Sophia Chang wants to be out there inspiring and empowering as many people as possible through her words and actions—including and especially young women. Need to hear Sophia bare it all? Go to the explicit version.

Sophia Chang is a badass of the music industry. As the daughter of Korean immigrants in predominantly white suburban Vancouver, she grew up shunning the “model minority” myth. Armed with a fierce sense of independence, she moved to New York City and infiltrated the world of hip-hop, yet remained mostly in the shadows of the artists she supported. With her debut memoir, Sophia Chang is finally ready to grab the mic for herself. This inspiring story spans her adventures in the music business, her path to becoming an entrepreneur, as well as her candid accounts of marriage, motherhood, marginalization, and martial arts.

For decades, she worked behind-the-scenes helping remarkably talented men tell their stories, including rap and R&B stars like the Wu-Tang Clan’s RZA, GZA, and ODB, as well as A Tribe Called Quest, Raphael Saadiq, and D’Angelo. As an A&R rep in her mid-20s, her world underwent a seismic shift upon encountering a formidable group of nine MCs known as the Wu-Tang Clan. That union would send her on a transformational odyssey, leading her to an enigmatic Shaolin monk who would become her partner, an enduring kung fu practice, two children, and a reckoning with what type of mother, lover, and woman she ultimately wanted to be.

In this Audible Original by Hello Sunshine, Sophia Chang drops knowledge about her motivating journey that took her from record label boardrooms to the Wudang mountains as she built a life shattering biases about Asian women. To this day, she declares she was “raised by Wu-Tang”, and she brings da ruckus as the baddest b*tch in the room. At last, her memoir shows the world exactly what that means.

Sophia Chang is one bad bitch

True story: on her first trip to NYC, a 20-something Sophia Chang went to an East Village club, spied Joey Ramone, and marched right up to introduce herself. They became fast friends, kicking off her 30+ year career in the music industry. That’s the kind of confidence it takes to become the first Asian woman in hip hop, managing artists like ODB, RZA, GZA, and A Tribe Called Quest. Featuring cameos from members of the Wu-Tang Clan, music samples, and a full sound design, The Baddest Bitch in the Room lives up to its name and has instantly become one of my favorite memoir performances of the year. Not only is it an incredible insider look at the world of hip-hop in the early years—it’s a road map for how to be a ride-or-die friend, mother, business leader, and kung fu warrior.

Sophia Chang is a Korean-Canadian music business matriarchitect who was the first Asian woman in hip-hop. Throughout her storied career, she worked with Paul Simon as well as managed Wu-Tang Clan members ODB, RZA, GZA, as well as Q Tip, A Tribe Called Quest, Raphael Saadiq, and D'Angelo. In 1995, Chang left the music business to be trained in kung fu and to manage the USA Shaolin Temple with her then partner with whom she has two children. Always ready to embrace new challenges, she produced runway shows for Vivienne Tam and "Project Runway All Stars," was an account executive at a digital agency, and wrote a screenplay for HBO. She is currently developing numerous film and TV properties. Her highly anticipated memoir is the Audible Original entitled The Baddest Bitch in the Room.

Founded by Reese Witherspoon, Hello Sunshine is on a mission to change the narrative for women through storytelling, creating and curating content that celebrates women and puts them at the center of the story. We tell complex stories that shine a light on where women are right now and those that help chart a new path forward.

We’re raising the bar on audio entertainment with these original listens produced in the Audible studios.
+More
EDITORIAL

There’s something so intimate and relatable about hearing someone tell you their own story in their own voice.
EDITORIAL

When writing and narrating talents combine, it makes for a special, not-to-be-missed experience.
+More

What listeners say about The Baddest B*tch in the Room

Sophia Chang is the voice I’ve been WAITING to hear and the voice I NEEDED to hear when I was younger.  The "Baddest Bitch in the Room" is many things -- a first gen/immigrant story, a leadership story, female empowerment story, and above all, a love story. "Baddest Bitch" captures Sophia's love of family, hip-hop, martial arts, the men in her life, and her multi-layered culture (Korean, Canadian, New Yorker).  She talks about her risks, struggles,  triumphs, and failures in relationships and business. She challenges different stereotypes/definitions/expectations about what it means to be an Asian woman, a single mother, a working mother, and a woman in her 50s. She speaks about her devotion to her children AND about her sexual needs and desires. Amen to that. Sophia gives women permission to be multi-dimensional: powerful and vulnerable, strong and kind, smart and sexy, confident and scared, feminine and foul-mouthed.


"Baddest Bitch" needed to be an audiobook. Print wouldn’t have done justice to all the layers and nuances of Sophia's story and her personality. Where else will anyone hear an 80-something year old Korean mom and hip-hop's greatest interspersed with French and ample f-bombs? Nowhere. As Sophia narrated, I appreciated hearing her laugh, hearing her voice crack when she recalled a friend's death, and hearing what sometimes sounded like unscripted commentary. Is it different than other audiobooks, maybe a bit grittier and imperfect? Yes. And that's what makes it so great.

I loved this book - raw, intimate, powerful and unapologetic. Sometimes it takes women decades to realize and claim their own identity and power. Never mind that you’ve been this way all along, it’s the claiming and proclaiming of the title that puts the Universe on notice. Sophia Chang blew me away with her honesty, her candor, her self awareness. I didn’t want the book to end because I knew I would miss hearing her in my car. But I did finish. And I do miss her. But it’s all good cuz I’m a bad b*tch too. Now to make sure the baddest women I know hear this story too. Listen now. Especially if you need to be reminded how bad you already are, were or want to become. Seriously, listen.

Could not put the book down. Sophia's story is .. just.. wow! When is the movie coming out? Thanks for rekindling my own fire for search for SELF!

Inspiring prophetic not just for listening but insightful. Sincerely thankful and Grateful and thankful bless.

I could not stop listening to this, from the very beginning! The story of Sophia's journey is captivating!! I was hanging on to every word. The voice-overs were an added bonus.

loved it. This was an encouraging story. Helped me to think about life. thank you

The Memoir I Didn't Know I Needed!

Not only did I need to read this beautifully fleshed out memoir, but I needed to hear Ms. Chang tell it herself! Adding the voices of those who were part of her life further enriched this audio. I was educated, enlightened, and inspired to be my own version of Baddest B*tch in the Room! All of the elements of this project satisfied! Much like spices adding more deliciousness to a meal, I gladly devoured every word! Looking for an example of walking out of what is "supposed" to be your normal, in order to live your authentic self out loud? Try this book!

Once I started listening, I couldn't stop! so many laugh out loud moments as well as some tear jerking moments. Amazed by all that Sophia has done and all the people she has worked with and those she has built community with-- wow, what a life!! Glad she is telling her story.

I loved cheered on agreed with and respected her strength throughout the book and how she came through the struggles of life she killed so many stereotypes that women face today just by being that boss bitch. im surprised who all she knew in the industry and managed who were some straight up rough and tough guys on the streets and in real life i loved how she let no one dictate how she was going to love. sex.. live..learn . parent...work or play I will definitely recommend this book .

Captured by the title, i chose this book to see if in it there are tips for how to be the BBItR. What i found instead was a warm, thoughtful, insightful look into a world i had no knowledge of. This is quite enjoyable, and, dare i say captivating.

We all bad bitches!

Loved it would listen before bed so Sophia was in my dreams fun dreams Thanks!